A European Future for Ukraine Outlined in Berkeley

Posted On: December 5th, 2015
Posted In: Analysis, Commentary and Analysis

The Ukrainian superstar vocalist, civil activist, and 2015 Yale World Fellow Svyatoslav “Slava” Vakarchuk drew a very large and lively crowd at the University of California, Berkeley on November 23, 2015 for his presentation on how Ukraine can become a prosperous European country. The talk by the lead singer and founder of the immensely popular band “Okean Elzy” was organized by the community organizations Nova Ukraine and Vox Ukraine and hosted by the university’s Institute of European Studies.

Vakarchuk has been quite active lately in global venues, advocating for the modernization of Ukraine through positive change within an international context. During a recent sold-out concert with his band in Israel, Vakarchuk said Ukraine has much to learn from that country’s experience in state-building. His stop in Berkeley was part of series of talks he was presenting throughout the United States. 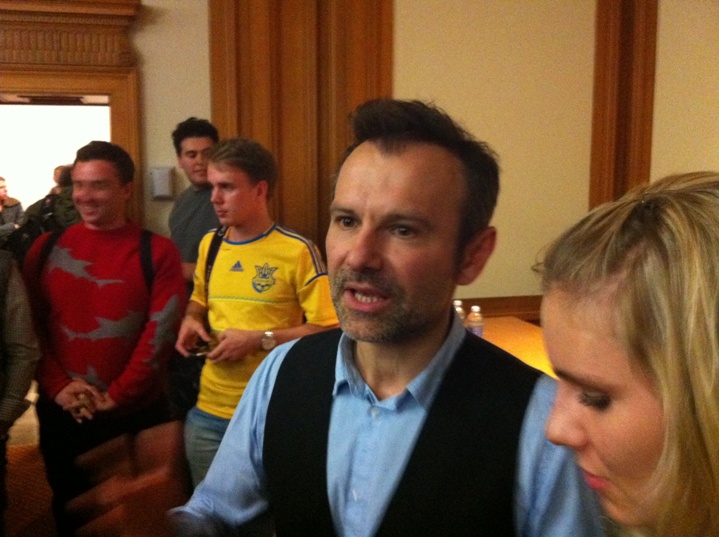 After introductions by Institute Director Jeroen Dewulf, who underlined his belief Ukraine belongs in Europe, and UC Berkeley Professor of Music Marika Kuzma, who listed the guest’s creative achievements, the plain-spoken Vakarchuk immediately launched into an a metaphorical account of matches, brushwood, and fire and the difficulties of lighting the flames of change. Both the moist young wood of immature society and the moldy wood of a society characterized by age, education, and mindset resistant to reform are difficult to set on fire.

Change comes from the top and from the bottom; he noted Ukraine currently lacks a critical mass of enlightened and educated leaders and a determined social stratum to enact an inevitable movement for reform. When there is not enough momentum, change agents begin to distrust those around them, and ultimately begin to distrust themselves. 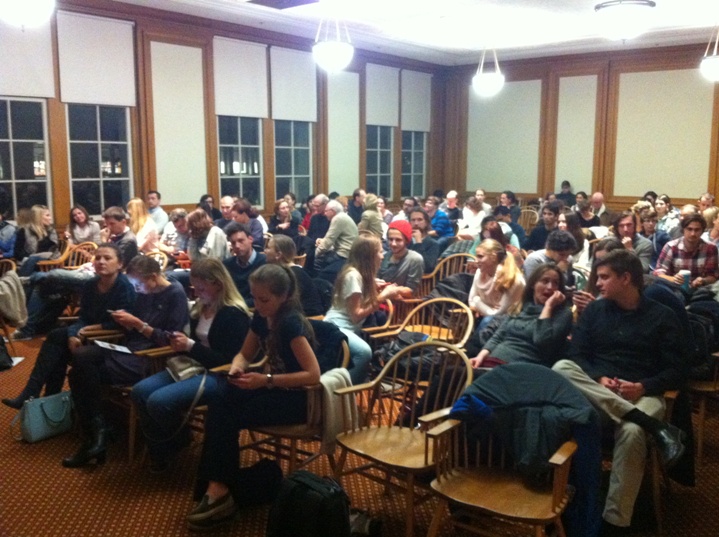 Vakarchuk called for an educational Marshall Plan for Ukraine and outlined five major points to change societal attitudes. First of all, Ukrainians need to think of their country in terms of the future and stop thinking of Ukraine in terms of the past. There is no common history accepted by all Ukrainians and there are two common languages. Despite these controversies a nation of common values and a common future can be organized. Ukrainians must be careful not to confuse the past with memory. The past is a burden, and one must always remember, but one should try to reach out to the future. 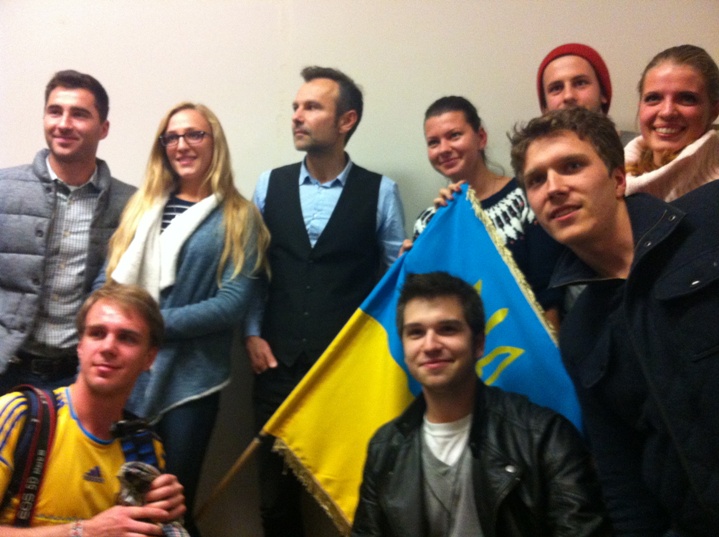 Points two and three are connected. Vakarchuk called for Ukrainians to be aware of their geography and that each neighboring country requires its own specific approach. Referencing the British statesman Lord Palmerston, Vakarchuk said a nation has no permanent friends or foes but only permanent interests. He quipped that it would be best if every neighbor would be a bit unhappy with what Ukraine was doing.

His fourth point called for the creation of a robust civil society, where at least ten to fifteen percent of the population would challenge and change the ineffectual and often corrupt approach of Ukrainian officials.

Finally, Vakarchuk urged each Ukrainian to act in his or her personal and political lives in a way that every change he or she makes would bring them incrementally closer to their final goal. Vakarchuk lamented that current Ukrainian leaders don’t use this framework and that current changes in the country are haphazard.

Vakarchuk viewed educational reform as an essential step to fight the stagnant paternalism in Ukrainian society. “In the U.S. children are allowed to challenge and question the teacher,” he said. “In Ukraine now, teachers are considered superior and just give data to children. This fosters dependence. But they need to find out what is the best part of each student and draw out the talent in everybody.”

Vakarchuk also emphasized the need for decentralization as local communities don’t have enough power and the capital has too much sway. “We have too many people who ‘negotiate’ with Kyiv. We need executives who know how to get things done. Mayors should compete so that talent rises.”

He also called for complete judicial reform (“Everybody must be replaced”); co-opting the oligarchs (“It is impossible and utopian ‘to get rid of them.’ Instead, move them over.”); and a vigorous defense policy with “an army that is a little bit stronger than a country of 45 million needs.”

Vakarchuk reported he was delighted to be greeted in Ukrainian by some employees on the Google campus during a recent visit. Talent and natural resources (“We have the best black earth”) will insure the emergence of a prosperous Ukraine.

He reiterated what he viewed as the common values that will unite Ukrainians to bring about improvement. A rejection of fatalism and self-reliance are key factors. “Ukrainians have retained the free man inside of all of us. We should keep Ukrainian individualism but add the Western values of freedom of choice, respect, and dignity. Focus on practical things today and every day. Do your job honestly. We are an extremely talented society. Don’t rely on your parents, or your children for a better future. Rely on yourself.”

All photos by Peter Bejger