“A particle of light dispels the greatest darkness” 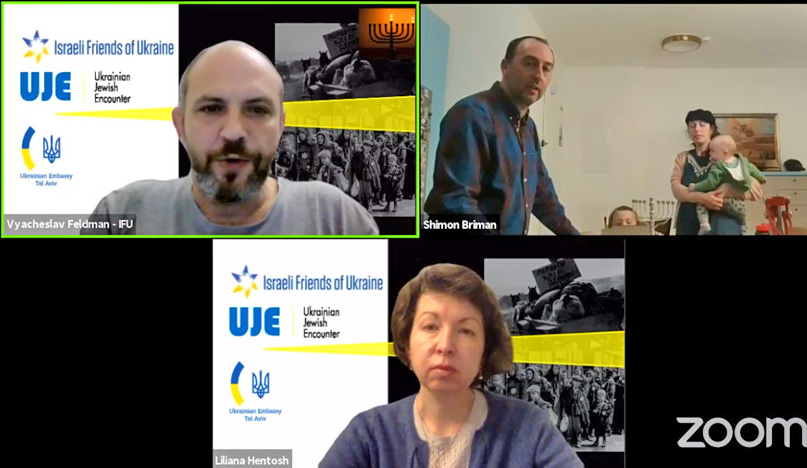 This is the title of a seminar devoted to the study of the Holocaust and the Holodomor, which was held in Israel in December 2020. The featured speakers were historians and researchers who work in the field of Ukrainian-Jewish relations.

The event was organized by the civic organization Israeli Friends of Ukraine, which for the fifth year in a row has conducted this form of dialogue devoted to aspects of Ukrainian-Jewish history.

As the head of the organization, Viacheslav Feldman emphasized, “Together we want to examine the history of rescuing and humaneness as manifestations of light amidst total darkness.”

Due to the coronavirus, the seminar was held online for the first time. Also, for the first time, volunteers Dmitry Vaisman and Oleksandr Trostianitsyn provided a simultaneous translation of the presentations from Ukrainian to Hebrew. The distancing form of the event did not reduce the intensity of the discussions.

The seminar took place with the support of the Canadian charitable non-profit organization Ukrainian Jewish Encounter and the Ukrainian Embassy in the State of Israel. During the opening of the seminar, Ukrainian Ambassador Yevhen Korniychuk emphasized the crucial need to remember all the victims of the Holodomor comprising the multiethnic nation of Ukraine.

The Ukrainian Ambassador’s theme was continued in the first seminar presentation by Dr. Artem Kharchenko, associate professor (docent) of the National Technical University in Kharkiv and a lecturer at the Claims Conference University Partnership Program in Holocaust Studies. He spoke on the topic “The Holodomor and Inclusivity of ‘Others’ in the Narrative of Memory.”

Kharchenko discussed the inadmissibility of instrumentalizing the memory of Holodomor, and the need to view the Holodomor as a multi-national tragedy, rather than as monoethnic genocide. The Kharkiv-based historian spoke out against turning the Holodomor into a dry history of figures.

In the course of this discussion, Kharchenko agreed with the view that excessive victim status and the artificial victimization of Ukrainian history are causing damage to the country and not fostering its advancement.

The historian declared that he categorically rejects accusations aimed at Israel, which can be heard occasionally in Ukraine, that assert: “We recognized your Holocaust, but you have not recognized our Holodomor.” Kharchenko emphasized that “both the Holodomor and the Holocaust are tragedies of my country and my people, and that is exactly how I perceive it.”

On the second evening of the seminar, the presentation of Andriy Usach, doctoral candidate at Ukrainian Catholic University (Lviv), on the topic, “Between Three Fires: The Rescue of Jews during the Holocaust in Volyn,” caused a real sensation.

Usach made public for the first time a case file that he discovered in the archives of the Security Service of Ukraine (SBU) relating to Maria Dmytruk, who was from a village located on the border between Galicia and Volyn. This young Ukrainian woman was arrested in 1946 for links with the Organization of Ukrainian Nationalists (OUN). During her interrogations by the Stalinist organs, it was established that during the Nazi occupation she rescued several Jews in her building.

These saved Jews voluntarily departed to another city and wrote declarations in support of the arrested Ukrainian woman. The Jews provided written testimonies to the local division of the NKVD (secret police) that while Maria was hiding Jews, “she was awaiting the arrival of the Red Army and condemned the bandits from the OUN and the UPA.”

Israelis learned of this incredible story of mutual aid between Ukrainians and Jews when the grateful rescuees, in turn, saved their rescuer. Thanks to the declarations of these Jews, Maria was saved.

Usach noted that Dmytruk’s story is that rare case where all the documents for Yad Vashem concerning the future awarding of the title Righteous Among the Nations are lying in a single folder in the SBU archives.

The topic of relations in Volyn was continued on the third day of the seminar by Dr. Petro Dolhanov of the Rivne Regional Institute of Postgraduate Teacher Education. His paper, entitled “Gray Zone: Complex Neighbor Relations during the Holocaust,” touched on the painful questions of material benefits during the rescue of Jews and in the course of the genocide of the Jewish population.

Dolhanov analyzed archival documents about the appropriation or purchase of property belonging to persecuted or killed Jewish neighbors in the cities of Volyn. The historian noted that the term “local population” includes not just Ukrainians but Poles, Czechs, and local Germans as well. At the same time, the desire to obtain economic benefits was an important factor in the attitudes of all ethnic groups toward Jews during the Holocaust.

Professor Dolhanov also stated that the topic of economic benefits stemming from the destruction of Jewish neighbors is not highlighted and understudied in Ukraine.

The final evening of the seminar coincided with the beginning of the Jewish festival of Hannukah, and the organizers lit festive candles online.

A paper entitled “Metropolitan Andrei Sheptytsky and the Rescue of Jews: New Documents and Old Myths,” was presented by Dr. Liliana Hentosh, Senior Scholarly Associate at the Institute for Historical Research of Ivan Franko National University in Lviv, whose specialty is the history of the Ukrainian Catholic Church.

She recounted the deep and longstanding ties between Sheptytsky and the Jewish community and discussed the formation of the metropolitan’s anti-Nazi position during the German occupation. Dr. Hentosh noted that the accusations against Sheptytsky, disseminated by Soviet propaganda, are often based on texts or declarations that he simply never signed or wrote.

Professor Hentosh emphasized that she anticipates doing a search of the Vatican archives for as yet undiscovered documents on Andrei Sheptytsky’s views during the Second World War.

The Israeli seminar revealed how the number of visits to online lectures has grown. The four seminar presentations in December 2020 were viewed by 2,600 people.

The seminar organizers are hoping for one more practical result: that the documents concerning the rescue of Jews which Andriy Usach discovered in the SBU archives will be submitted to the Yad Vashem commission in charge of awarding the title of Righteous Among the Nations to Maria Dmytruk.