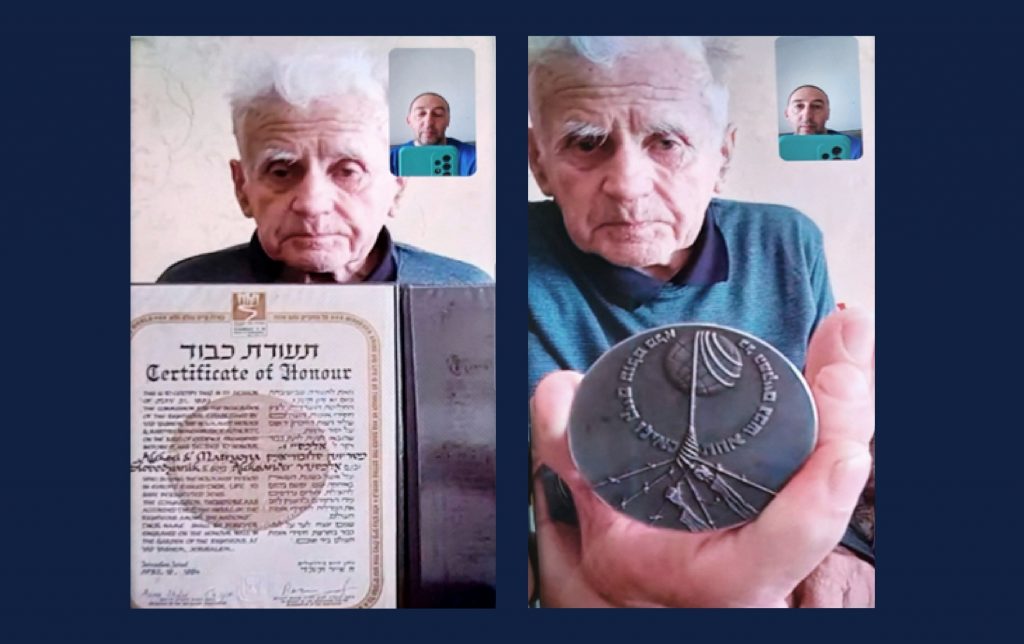 The teenager Sashko Slobodianyk, together with his parents, saved the lives of David and Dora Gershengorn. The Ukrainian family hid some homeless and starving ghetto prisoners in their house in Bershad. Eighty years later, the only homeless Righteous Among the Nations is appealing to Jews for help.

In the last decades, Oleksandr Oleksiiovych Slobodianyk, 93, has been living in a picturesque village on the banks of the Dnipro River in Kherson oblast.

The elderly man and his family spent the first month of the Russian invasion of Ukraine, which began in late February 2022, in a cold cellar without water, gas, and electricity. Russian tanks were driving down the streets, firing in all directions. At the time, 40 percent of the buildings in his peaceful village were already destroyed. Today, well into the fourth month of the war, it is almost impossible to imagine the level of destruction in this village.

His son-in-law, Serhii, waited for a lull in the shooting and drove the entire family in a car across the front line, from the zone captured by Russian troops to positions held by the Ukrainian army.

In escaping from his village that was occupied by Russian "denazifiers," Oleksandr was forced to leave behind nearly all his belongings, but he managed to take his certificate of honor and medal issued by Yad Vashem.

I located the Slobodianyk family in a raion center of Poltava oblast, where they had arrived as war refugees. I described their problems to Moshe Reuven Azman, the Chief Rabbi of Ukraine, and he set out immediately to meet the Righteous Among the Nations and offer them material assistance. The apartment that Rabbi Azman rented for them for five months is their third temporary residence since their escape from the Russian army.

Whenever I spoke with Oleksandr via video, his stories about the Second World War and the occupation were interspersed with descriptions of this war and the new occupation.

"They (Jews), poor things, experienced so much suffering under the Germans. Today we are experiencing the same life as the Jews did. What is happening in Ukraine right now … I am very sorry for the people, I am outraged at Russia. Such a misfortune! This war is worse than the other one," Slobodianyk says.

His father, Oleksii Slobodianyk, was a member of a clandestine organization and worked in a restaurant, where he eavesdropped on the conversations of the occupiers, passing important information to the underground, and printed leaflets. The Jews of Bessarabia and Bukovyna were driven into the ghetto in Bershad. In 1942 Oleksii spotted a hungry Jewish boy who had climbed through the camp's barbed wire in search of food. That boy was ten-year-old David Gershengorn.

Oleksii brought the boy to the bathhouse, fed him in the restaurant kitchen, then brought him home with him. He told his son, Sashko, that he had brought him a little brother and that they would now be living together. Oleksii and his wife, Motrena, did everything possible to make Gershengorn feel at home, and Sashko taught him Ukrainian.

The Slobodianyks, father and son, secretly brought food to the camp for David's mother, and later helped her leave the camp dressed in Ukrainian peasant clothing. For a month, she lived secretly in the Slobodianyks' house. Eventually, she was brought to her relatives in a distant village.

"The Romanians were stationed in Bershad. The Germans came there occasionally; the commandant's office was in the city. The Romanian soldiers did not treat the Jews very harshly, but the Germans were extremely hostile and could kill. When the Romanians arrested my father, Jews made efforts to save him: They chipped in their (gold) rings and purchased my father's release, and he was not taken to the German commandant's office. My father continued to print leaflets and instructed my friends and me to distribute them in the neighboring villages. The leaflets stated that the occupation would not last forever and people should know that our side would win," Oleksandr recounts.

His father joined a partisan detachment, was wounded, and later died of his wounds. Despite her terrible loss, Motrena continued to take care of David Gershengorn as though he were her own son. In March 1944, these territories were liberated, after which David and Dora Gershengorn returned to Moldova.

When Oleksandr Slobodianyk grew up, he worked for many years in the Donbas mines. David Gershengorn was able to locate his rescuer only in 1975, when the latter settled in the Kherson region. David's and Oleksandr's families became close friends and began visiting each other. Later the Gershengorns immigrated to the US.

In 1993 David Gershengorn succeeded in getting Yad Vashem to award the title of Righteous Among the Nations to Oleksii, Motrena, and Oleksandr Slobodianyk. David died in New York in 2021 at the age of 90, and his mother, Dora, lived in the US until her death at the age of 106. The trans-Atlantic communication between the Ukrainian and Jewish families continues to this day between the children and grandchildren of the rescuer and the rescued.

In 2021 President Volodymyr Zelensky of Ukraine signed a decree about special pensions for Righteous Among the Nations, but Oleksandr Oleksiiovych's name was omitted from the list. Ihor Fris, a Ukrainian MP from Ivano-Frankivsk, offered his assistance. Thanks to his efforts, the Cabinet of Ministers of Ukraine added the Slobodianyk surname to the list of recipients of the presidential pensions.

Oleksandr's son-in-law, Serhii, 62, recounts: "Granddad is crying. He wants to go home, but what home? There's only shooting there! They [the Russian soldiers] are going from house to house and seizing cars. I hid mine. There was an explosion in a neighboring garage, then shooting once again. I fell on top of my grandson and covered him. Fear and horror. I see houses and roofs flying into the sky from explosions."

"We cannot break up the family. My mother is bedridden, and a flight will be difficult for my father-in-law. We were invited by Germany, but we can't travel there. We thank Moshe Azman, the Chief Rabbi of Ukraine. Right away, he made a transfer to our bank card. We have enough for food; for the time being, we can buy everything. But we have to resolve the living situation so that we are not dependent," says Serhii, who is taking care of Oleksandr.

In mid-June 2022, Oleksandr Slobodianyk celebrated his 93rd birthday. One of the best moments of his birthday was a phone call and best wishes from Michael Brodsky, Israel's Ambassador to Ukraine.

A few days ago, I received a letter from the elderly Righteous Among the Nations, asking me "to deliver it to the Jewish people," which I am doing. The text was dictated to his daughter and signed by Oleksandr. I deleted the name of the village in the Kherson region so that no harm would befall their house, which is still in the hands of the Russian army.

Appeal to the Jewish People and International Organizations and Foundations

I, Oleksandr Slobodianyk, spent my life in my native land, in the village of […], in the Kherson region, amidst wonderful people, in the circle of my loving family.

Could I have ever thought that at the age of 93, I would be forced to leave a place dear to my heart, a house that I built with my own hands, my property, and travel hundreds of kilometers away from the artillery bombardment of the Russian occupiers? I could not remain under occupation by the Russian army because they are destroying houses, cars, and people in their path, not pitying children, women, or old people.

Did I think that in my life I would have to see fascists in my home a second time?

In 1993 I was awarded the title of Righteous Among the Nations at Yad Vashem. During the Second World War, my parents and I saved the lives of Jews, risking our lives, and at the present time, now that we have left our home, I am obliged to request the help of the Jewish people to obtain living quarters.

I will permit myself to express a hope. Over the dozens of years the influential international Jewish organization Claims Conference has been in operation, their budget for compensating Holocaust victims has topped one billion dollars.

This organization does not usually purchase apartments for Righteous Among the Nations. But we now have before us an extraordinary case that came about because of Russia's barbaric aggression against Ukraine. Perhaps the Claims Conference will find — in this exceptional case — 30,000 dollars for the purchase of a modest little house in the Poltava region for the only homeless Righteous Among the Nations and his family?

Oleksandr Slobodianyk's story is an example of the mutual aid between Ukrainians and Jews in an epoch of bloody tragedies and inhuman tribulations. Thus, there is always the hope that the "boomerang of goodness" will return to this Righteous 80 years after his family's heroic feat during the Holocaust. 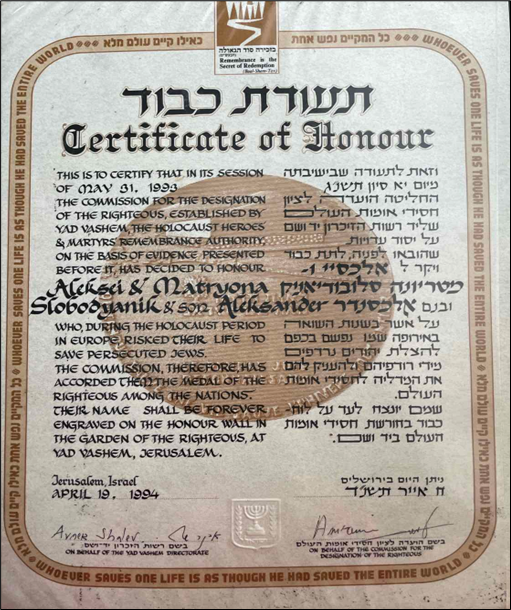 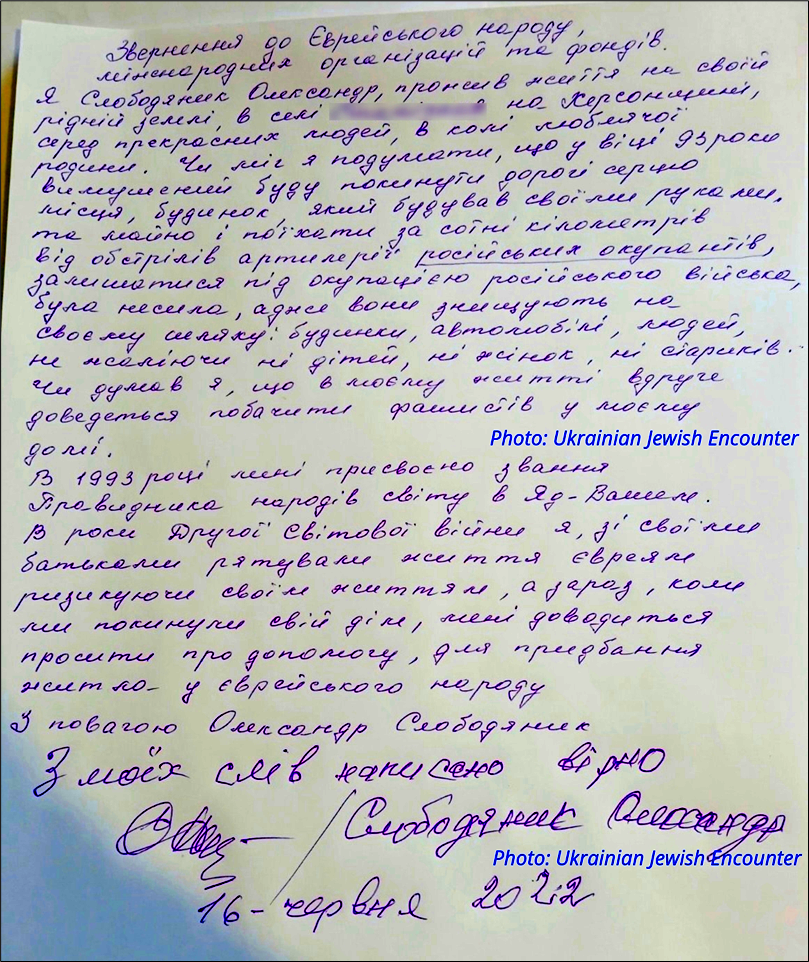