“Besides its presence in biblical texts, classical Hebrew appears on stelae, plaques, and even on cave walls”— Dmytro Tsolin 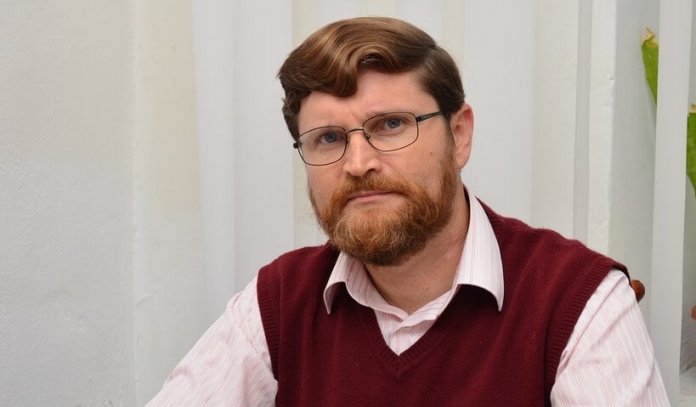 Our guest on the show is Dmytro Tsolin, Doctor of Philology, professor, director of the Center for Jewish Studies at the National University of Ostroh, associate professor at Martin Luther University Halle-Wittenberg, and the author of the book The Aramaic Language of Biblical Texts and Targum Onkelos.

The large corpus of Old Testament texts contains quite a few variations of the language, which differ both chronologically and dialectologically. Some contemporary Hebraists wonder if we can use the term “classical Hebrew” to describe all the books of the Old Testament. This is rather a conditional concept. The language has a common origin, a lot of common features, but it should be noted that there are differences in individual books, and in individual layers. Classical Hebrew includes so-called graphic texts, that is, texts of inscriptions that were found at different times on the territory of modern Israel.

Vasyl Shandro: Which languages do we call classical? Does this depend exclusively on a certain chronology?

Dmytro Tsolin: We use this term when we talk about a written language that has been preserved in written monuments but which is no longer used. As a rule, the term “classical languages” is used in this very sense in relation to which written and literary monuments have been preserved in this language.

Vasyl Shandro: Which texts are written in classical Hebrew?

Dmytro Tsolin: It is believed that the text of the Old Testament, the Tanakh, is the most extensive evidence of classical Hebrew. Apart from its presence in Old Testament texts, this language appears in some epigraphic texts; that is, it is written on various stelae, plaques, and even on cave walls.

Vasyl Shandro: Can we say that classical Hebrew was a spoken language?

Contemporary Hebrew Studies have a debatable theory about what social strata can be seen in the text of the biblical Hebrew language. According to one opinion, in the text of the Old Testament itself, you can find different levels of the literary language.

Vasyl Shandro: To what extent did classical Hebrew intersect with other languages? Is there evidence of translations, word borrowings?

Dmytro Tsolin: European civilization is intricately connected with the text of the Bible. If we are talking historically about the beginning of influence, then we can say that this influence and the Europeans’ familiarity with the biblical text began even before the rise of Christianity.

The Old Testament began to be translated into ancient Greek as early as the third century BCE. At first, the Five Books of Moses were translated, then the rest of the books. It was finally completed some time in the mid-second century BCE.

Vasyl Shandro: Was the need for such a translation purely intellectual or religious?

Dmytro Tsolin: First and foremost, it was a need of the Jewish community itself, seeing as very many Jews lived in Greek-speaking countries, where Greek was the language of daily communication.

According to the legendary Letter of Aristeas, which states that the translation of the Old Testament into ancient Greek was commissioned by the Egyptian pharaoh, it would appear that the ancient world wanted to acquaint itself with Jewish holy writings.

This theory is reliable because the mention of Ptolemy [II], who commissioned this translation, appears not only in the Letter of Aristeas but in other Jewish sources as well.

If we are talking about the history of classical Hebrew, then somewhere on the verge of the Common Era, the localization of its living use as the language of everyday life severely contracted. In fact, this was Judea, perhaps Jerusalem and its vicinities—a bit south of this territory. In the rest of Judea, people spoke the languages of the diaspora, the countries in which they were living. The most common languages spoken by the Jews of that period were Aramaic and Greek. The language did not disappear as a living one, but later we see that it has mostly turned into a literary language. Jews in the diaspora begin speaking Arabic and, eventually, the languages of the European peoples. Thus appear variants of Hebrew that do not have a Semitic base. During the Middle Ages, it exists as a literary language; texts are written in it.

Vasyl Shandro: Can the influence of classical Hebrew be traced in the Ukrainian language?

Dmytro Tsolin: These traces exist; there are very many of them, above all, names. Thanks to the fact that Christianity recognized the Old Testament as a holy book, and the New Testament as well, very many names of Jewish origin entered our everyday life; for example, the name Ivan, which in fact is Yohanan, transformed via the Greek language. This is a Jewish name that means “God is gracious.” The same goes for the names Semén, Tadei, Varfolomii, Maria, Anna, and Marta. At the same time, religious vocabulary gained a firm foothold in our language; thanks to Christianity and thanks to biblical texts, such words as “alleluia” and “amen” entered very strongly.

Vasyl Shandro: If we are talking about Hebrew Studies, is there a certain tradition of researching classical Hebrew texts in Ukraine?

Dmytro Tsolin: The tradition formed in the eighteenth century, mostly at the Kyivan Mohyla College and eventually at the Kyiv Theological Academy. Symon Todorsky may be regarded as the first Ukrainian Hebraist. From the standpoint of contemporary scholarship, his works were rather primitive, but at the time, it was on a fitting level. If we are talking about the current state, we can dream about a renaissance, and I think we will do this.