The photography exhibition Between War and Peace: Ukraine—Israel is an important event in the cultural life of Israel and offers Israelis an opportunity to discover Ukraine from new perspectives.

The exhibition, dedicated to the second anniversary of the Revolution of Dignity and anti-terrorist operations in eastern Ukraine, opened in the Jaffa Art Salon gallery on February 19. The choice of the exhibition venue was a success as the Old Jaffa port is one of the most visited tourist sites in the center of Israel.

Yari Rotman, one of the founders and chairs of the Jaffa Art Salon, shared his impressions about the exhibition. "What we've seen here was really touching. This is one of the highest quality and most professional photography exhibitions during our gallery's six years of activity. It is important to show Israelis that Ukrainians are also suffering, and they are facing the same challenges as Israelis. We were honored to welcome the Ambassador of Ukraine in Israel here at the opening."

Yair Rotman had never before been to Ukraine. His ancestors came to Israel from Bessarabia. "But after seeing the exhibition and talking to the remarkably open-hearted guys and girls from Israeli Friends of Ukraine, I decided to go and see this beautiful country of Ukraine, about which I learned many new facts. I found out the military conflict is only in the east and therefore taking a flight to Kyiv is not dangerous. I decided to go there and see those beautiful landscapes with my own eyes. I've heard the same also from other Israelis who visited this exhibition," Rothman pointed out.

It is important to notice that there were many native Israelis among the public who discovered Ukraine and the dramatic realities of its modern history for the first time. The exhibition was initially planned to close on February 25. The Jaffa Art Salon managers however offered the organizers an opportunity to extend the exhibition until March 1 without extra cost after seeing the great interest of Israelis in the Ukrainian subjects. Shortly afterwards they were once again requested to extend the exhibition until March 6.

Ukraine's Ambassador to Israel Hennady Nadolenko stated at the opening ceremony: "Two years ago, in the center of Kyiv the fiercest battles for freedom broke out, and the Ukrainian people are still struggling for dignity and independence, feeling the solidarity and support of the people of Israel." 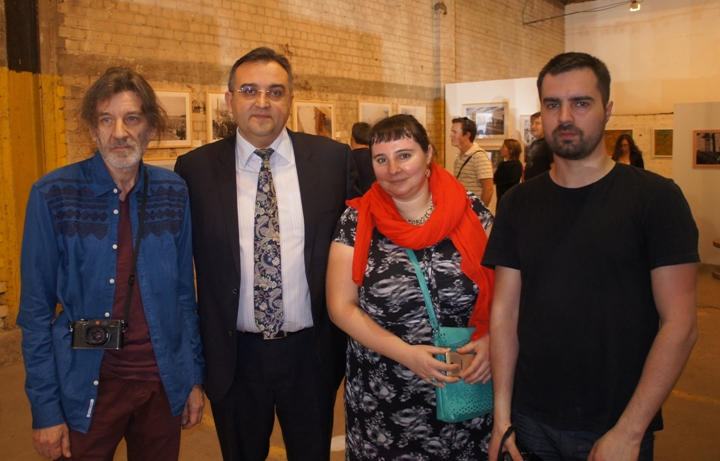 Ukraine's Ambassador in the State of Israel Hennady Nadolenko with Ukrainian photographers at the exhibit in Jaffa.

The visitors of the exhibition had a chance to get acquainted with the works of eminent photographers: Oleksandr Glyadyelov (Ukraine), whose photographs have been exhibited in Paris, America, and other places all over the world; Oleksandr Kozachenko, today a leading photographer at Forbes Ukraine magazine and the chronicler of events on the Maidan; and Margo Ormotsadze (Ukraine), who is also a journalist, writer, and poet.

"Our routine peaceful life is always accompanied by the readiness to 'bury our heads in our hands' as we hear the sound of an air raid siren. This is what our children did last summer abroad, when they heard the sounds of fireworks in the sky—they lay on the ground and buried their heads in their hands. This is our world—the world of Israelis and Ukrainians," noted Mila Margolin, an Israeli Friends of Ukraine activist.

ІThe idea of a simultaneous photography exhibit by Ukrainians and Israelis had a noteworthy effect. In many images, war and the peaceful routines of everyday life overlap, and without a caption one cannot tell whether the shot was taken in Ukraine or in Israel.

Anna Zharova, head of Israeli Friends of Ukraine, emphasized: "There is much in common between Israel and Ukraine today: the struggle for independence, the struggle for their own land, the striving for peace. We increasingly hear about Ukraine being compared to Israel, and it is important for us to introduce to the wider public the artwork of Ukrainian and Israeli photographers where the lives of two nations have intertwined."

Zharova has already started negotiations in Kyiv to show this exhibition in the Ukrainian capital in May 2016, closer to the Independence Day of Israel. This exhibition of the two countries' photographers thus may become a creative bridge connecting the Jewish and Ukrainian peoples.

In the pictures: the participants of the exhibition in Jaffa.