Eighty years later: The tragedy of the Jews through the eyes of a Ukrainian girl

Posted On: August 26th, 2021
Posted In: The Holocaust in Ukraine, History 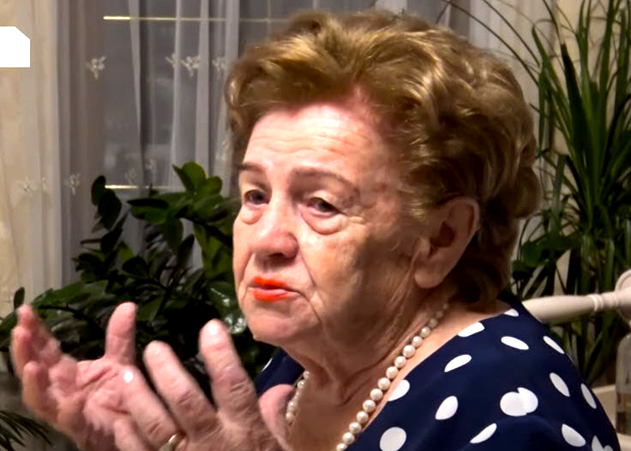 An unexpected encounter took place in August 2021 in the Carpathian Mountain resort town of Truskavets, where Rabbi Moshe Reuben Asman was vacationing. Lev Hrytsak, the general director of the Karpaty Hotel and Resort Complex in Truskavets, suggested the rabbi meet his mother, Khrystyna Yevstakhivna Hrytsak.

Mrs. Hrytsak recounted her childhood memories about the Holocaust to the Kyiv rabbi and about her family’s participation in rescuing some Jewish neighbors.

She was born in Buchach, Ternopil oblast, and at the start of the Nazi occupation of the town, she was a six-year-old girl named Khrystyna Bereza. Her mother was Polish, and her father, who was a first-rate construction foreman, was Ukrainian.

Her Polish grandfather, whose surname was Szczerbaniewicz, owned two large buildings where Jewish families lived. The Jewish neighbor woman’s name was Henia Pohorilie, and Khrystyna played with her son, Moishe.

When the persecution of the Jews began, Henia abandoned her apartment and went into hiding. During a round-up operation, Henia fled to the home of the Bereza-Szczerbaniewicz family to hide and wait it out.

"We had the key to an empty apartment where some Jews had lived earlier, and I am bringing Henia across the street to grandfather’s building. I go downstairs. Mama gives me a black, knitted shawl. I accompanied Henia, brought her to the apartment; she stayed there for the entire duration of the operation. Afterwards, she went to where her relatives were hiding. A woman neighbor who was looking out the window shouts to my mother: "Mrs. Bereza! Are you crazy? You have one child, and you let her go? They could have killed her!" Mrs. Hrytsak said, recounting her role in saving that Jewish woman.

After some time, grandpa Szczerbaniewicz was standing on the balcony, and he saw Germans leading Henia and another Jewish woman along the street near his building. Raising her head, she called to him: “Mr. Szczerbaniewicz! Save me! I want to live!”

Grandpa went to my mother (Maria) and said: "Manusia! I am constantly seeing her eyes. I won’t be able to endure this! Do whatever you can to get her out of jail and save her from death."

Mama went to consult with a Polish lawyer for some advice. At first, he refused to help, but she insisted. Then the lawyer told her to collect a large sum of money to bribe the local policeman and to come in the evening to Sobieski Park, near the prison.

"Mama collected money from our entire family. In the evening, she went to the meeting place designated by the lawyer; the policeman brought Henia out. Mama took her home, heated some water in the round bathtub, and put Henia in it. I was all over the place; I saw everything. I kept quiet and just observed," Mrs. Hrytsak recounted.

After this, my great-uncle, Casimir Szczerbaniewicz, drove Henia to Lviv, dyed her hair, made some new documents, and sent her to Germany along with a group of Ostarbeiter [forced laborers — Ed.] Earlier, Henia left her son with a Pole named Mazurkiewicz. Sadly, he drove the child to a village and, according to rumors, handed little Moishe over to the Germans.

Henia Pohorilie was nonetheless saved. She remained in the West and wrote to Buchach after the war, begging to locate her son, but this was no longer possible.

The family of a Jew named Shlomo Finkelman lived on the lower floor of the Szczerbaniewicz building; his workshop was also located there. Little Khrystyna remembers that Shlomo would visit them after work. She would climb onto a stool and reach into his pocket because he always brought her a chocolate or a piece of candy.

When the round-ups of the Jews began, Finkelman and his family moved to another building. The Nazis came and killed his wife and children, but he managed to jump out and escape. He saved himself, and then he went to the Bereza-Szczerbaniewicz family.

Finkelman was hidden in that same apartment, and Khrystyna brought food to him. Finkelman hid until the arrival of the Red Army. Afterwards, he married a Jewish woman who had also survived the Holocaust, and they went to Israel, where their two sons were born.

A few years later, Finkelman wrote a letter to his rescuers and sent them some mandarin oranges from Israel. Khrystyna’s mother, in fear of the Stalinist state security organs, asked him to stop writing to them directly. So, Shlomo sent his letters and packages through relatives of the Szczerbaniewiczes in Poland.

Mrs. Hrytsak recounted the horrors of the war to Rabbi Asman. In front of her very eyes, a German soldier was escorting a Jewish woman and her little girl. They did not want to go. He shoved her with the butt [of his rifle], then he shot and killed her on the spot, her skull shattered into pieces.

In another incident, Khrystyna saw a large group of Jews being shot. A mother and her daughter fell, and they were covered up with earth. “My sister and I ran over there and heard the Jewish girl speaking from underneath the earth: ‘Mama! Mommy! Get me out of here! It’s so cramped and dark here!’ But a local Polish man by the name of Twardowski came over and finished off both the mother and her daughter with a pickaxe," Khrystyna recounted what she had seen.

Mrs. Hrytsak is ready to point out those places in Buchach where, as she recalls, these murdered Jews are buried. She wants fitting monuments erected at these mass gravesites.

The Kyivan rabbi said in his television interview that the account of this Buchach native touched his heart deeply. “I want to send her testimonies about the terrible years of the Nazi occupation to Yad Vashem, the World Holocaust Remembrance Center, to start the process of granting her and her family the honorific of Righteous Among the Nations. For me, this topic is vital. For the past several years, I have been engaged in the cause of restoring justice so that Yad Vashem will grant the title of Righteous Among the Nations to Metropolitan Andrei Sheptytsky.”

Rabbi Asman wants to locate the relatives or descendants of Henia (Yevheniia) Pohorilie and Shlomo Finkelman in the U.S. and Israel.

"I bless Khrystyna Yevstakhivna and her family. May the Almighty preserve them, so that they will enjoy material and spiritual prosperity," Rabbi Asman emphasized.

Lev Hrytsak, Khrystyna’s son, noted: “I was struck by Rabbi Moshe’s humanity and attentive attitude to my mother’s account. She revealed to him those tragic events that she witnessed during the Second World War. And I am glad that the rabbi appreciated her family’s conduct in those awful years.”

"The biggest lesson that I learned today during this meeting is this: Both Jews and Ukrainians, and everyone else should live in the name of our children’s and grandchildren’s good future, and these terrible events should never happen again," underlined Hrytsak.

The case of Khrystyna Yevstakhivna Hrytsak demonstrates that there may be many more Righteous Among the Nations in Ukraine than the official figure of the nearly 2,700 people who have been recognized by Yad Vashem. Many of these people have not said anything about what they have experienced for decades. Therefore, Yad Vashem did not receive any information about their deeds.