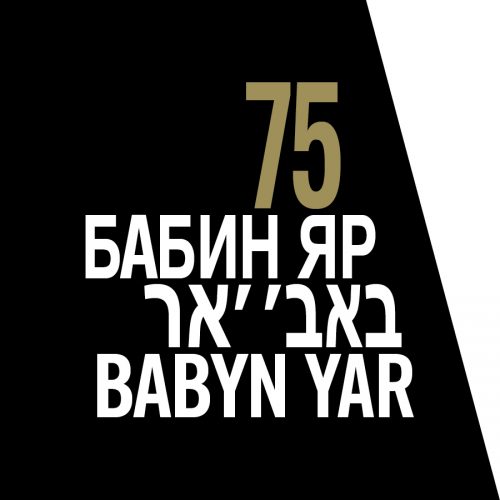 September 29, 2016 will mark the 75th anniversary of the murder of 34,000 Jews that occurred at Babyn Yar, a ravine on the outskirts of Kyiv, the capital of Ukraine. Like Auschwitz in Poland, Babyn Yar in Ukraine has become a major symbol of the destruction of Europe’s Jews during the Holocaust.

The Ukrainian Jewish Encounter, a Canada-based non-governmental organization, working in cooperation with the World Jewish Congress, Ukraine’s government, and other Ukrainian Jewish and diaspora organizations, will sponsor a series of public events in memory of what took place. The events include a youth conference, a public symposium, a memorial space competition, and a commemorative concert.

The youth conference, which will take place from September 24-28, will look at the legacy of Babyn Yar. Young people from Ukraine, North America, Europe, and Israel will participate in a series of town hall meetings. Roundtable discussions and public lectures with questions and comments will address not just historical issues and the Holocaust but also current problems in Ukraine and the world. The Ukrainian poet Serhiy Zhadan will present the final lecture of the youth conference on September 28. The youth program was organized by historian Dr. Igor Shchupak from Dnipro.

The symposium for the academic community and the general public, taking place on September 26-27, will investigate the treatment of Babyn Yar in arts and culture, international law and memory. Key speakers include Timothy Snyder, Karel Berkhoff, Norman Naimark, and Holocaust survivor Shimon Redlich. The public symposium was organized by Dr. Liudmyla Hrynevych.

Also presented at the symposium will be a new book on Babyn Yar in both English and Ukrainian editions, published by Dukh i Litera Publishers. Dr. Vladyslav Hrynevych and Dr. Paul Robert Magocsi from the University of Toronto are the chief editors of the new volume. This collective monograph by a distinguished group of Ukrainian and international scholars investigates Babyn Yar in all its aspects. Beyond the detailed and harrowing accounts of what actually took place in Kyiv in late September 1941, the book covers the Babyn Yar as historical symbol, both before and after the Holocaust,

The third component will be the presentation on September 28 of winning entries of an international landscape design competition to create a potential necropolis at Babyn Yar. The best landscape designs by architects from Slovenia, France and the United States will be exhibited during the conference. Designs will also be on display at the Kyiv History Museum, 7 Bohdana Khmelnytskoho Street, until November 27. Dr. Vitaliy Nakhmanovych is the competition chairperson.

Finally, a memorial concert at the Kyiv Opera House on September 29 will engage artists from all over the world. The Hamburg Symphony Orchestra will perform as will the renowned Ukrainian Dumka Chorus. There will be soloists from Canada, England, Israel, and Germany. The concert will feature the remarkable Ukrainian conductor Oksana Lyniv, who works with the Bavarian State Opera, as well as the British opera singer of Ukrainian descent, Paul Hunka.

The concert’s program will include a form of Jewish prayer by the composer Max Bruch, the Babyn Yar Kaddish Requiem by Yevhen Stankovych, and the famous Requiem by Johannes Brahms.
Registration for media will start September 25 at 10-00 at Ukrainskiy Dim (Ukrainian House, Khreschatyk st, 2)

For media:
The student symposium and public lectures are open to media. No advance accreditation is necessary, although media representatives are asked to register when they arrive and show press credentials. Filming inside the lecture halls is allowed for both the student and public seminars. Please be respectful of speakers and audience members.

The commemorative concert is by invitation only. However, broadcast media will be able to film the dress rehearsal on Thursday, Sept. 28, 2016, which will take place at the National Opera of Ukraine, 50 Volodymyrska St. Cameras must be set up by 16:30, within the first 10 rows of the stalls. The rehearsal is open to all forms of media. Media representatives are asked to register when they arrive and show press credentials. Media will be required to stay through to intermission or through the entire dress rehearsal in order not to disrupt the rehearsal. Media will be able to ask Pavlo Hunka questions when he meets with participants of the student conference during intermission.
For questions, contact Natalia A. Feduschak, UJE’s Director of Communications at  +38066-704-9681.

The conference program is here.