Exploring the legacy of the Holocaust in Ukraine 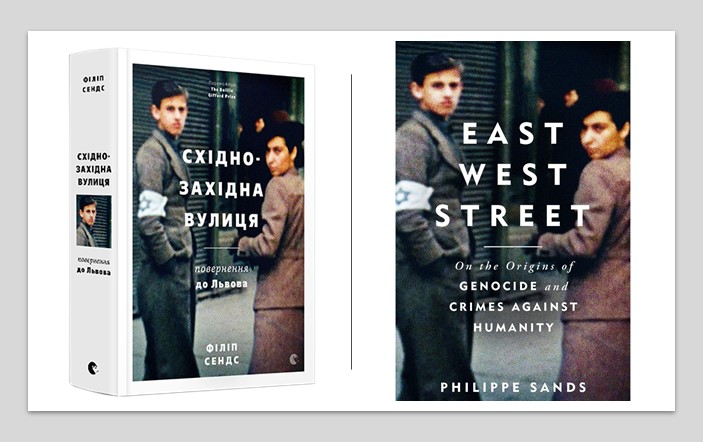 These dramatic themes are recalled today due to the recent publication of the Ukrainian-language edition of East-West Street by Phillip Sands, a book presented by the author at the 2017 Lviv Book Forum.

The Ukrainian publication of the critically acclaimed book by Sands recalls a panel discussion held on the very theme of guilt, justice, and family ties back in 2014 at the Center for Urban History of East Central Europe in Lviv.

Panel moderator Sofia Dyak noted back then that we have many accounts of the Holocaust and other atrocities, but very few of the perpetrators.

Sands was joined at the panel by his two of the subjects of his book. There was Nicklas Frank, the son of Hans Frank, a Nazi war criminal who was convicted of war crimes at Nuremburg and executed in 1945. He was joined by Horst von Wachter, the son of Otto von Wachter, who was the Nazi governor of Galicia and died in hiding in Rome in 1949.

Sands, Frank, and von Wachter all share ties with Lviv, or, as it was known then, Lemberg. Sands’s maternal grandfather was born there before the First World War. Niklas Frank’s father Hans Frank delivered a notorious speech in the great hall of Lviv University in 1942 lauding in a grotesquely humorous manner the extermination of the area’s Jews. Horst’s father Otto von Wachter was instrumental in creating the SS Galicia Division.

As Sands has pointed out in his work, Niklas Frank hates his father. Horst von Wachter loves his, arguing Otto von Wachter was a decent man trapped in an impossible situation. Horst asserts his father spoke up against Nazi plans to make occupied Lviv a completely German city by purging it of all non-Germans.

Sands calls his book an investigation of how a son deals with the legacy of his father. As Sands said, “The usual custom is that one honors his father. But equally there is also a custom that if one’s father has killed people, one should have a degree of recognition of what one’s father has done.” Sands wanted to explore this relationship between responsibility and love. “Frankly,” said Sands, “I think of Horst and Niklas as victims as well.

Sands was surprised by the lack of questions from the Lviv audience to the panel. He was of the opinion this might because of what he called, “the elephant in the room,” which was Ukrainian involvement in the atrocities of the war. He said he felt very much at home in Lviv after numerous visits, but stressed, “nowhere does one see an engagement with what happened. What is your reaction? If you’re engaged, why? Or why not?

A young woman in the audience had one answer. She said, “Most of our relatives, our grandparents, our great-grandparents, were killed. There is nobody to ask about these events.” She went on to say that in her opinion Ukrainian “discomfort is not because of engagement or non-engagement but because we are a country in a war [with Russia].”

The moderator Dyak stepped up in place of the audience silence to offer her take. “How many things can you ask and how many things have relevance in later generations? How many things can you transfer? But we are living here now and can make our decisions about what we think is good or bad, what is relevant and what questions we can ask or we don’t ask. We also think we can ask later, and there won’t be anybody to answer these questions. For difficult questions, there is no good time to ask, because they are difficult. You basically have to be brave and start asking them. Asking privately. Even more importantly, publicly.”

Dyak argued that Ukraine’s challenge is “About having and finding a space—intellectual and even more emotional—about having these different stories together, but them actually not fitting each other. So how do we make room for all of that? Try to know more and more and not hide.”

Sands reflected on the situation in Galicia during the war and what may have driven people to commit massive violence. “The anger must have been very deep,” he said. “Is it about power? Economics? Religion? Tribalism? He pointed out one commonality he found in the Holocaust to contemporary atrocities to be found in Rwanda, Libya, the Congo, or elsewhere. And this was the capacity of one group to treat another as ‘the other.’ As if they don’t share a common element of humanity.”

With the recent publication of the Ukrainian-language edition of the Sands book, perhaps new readers will seek more engagement with the past and ask questions. Sands reminded the audience that it was always necessary to ask questions. As he noted, “we might actually learn something. And improve the human condition.”