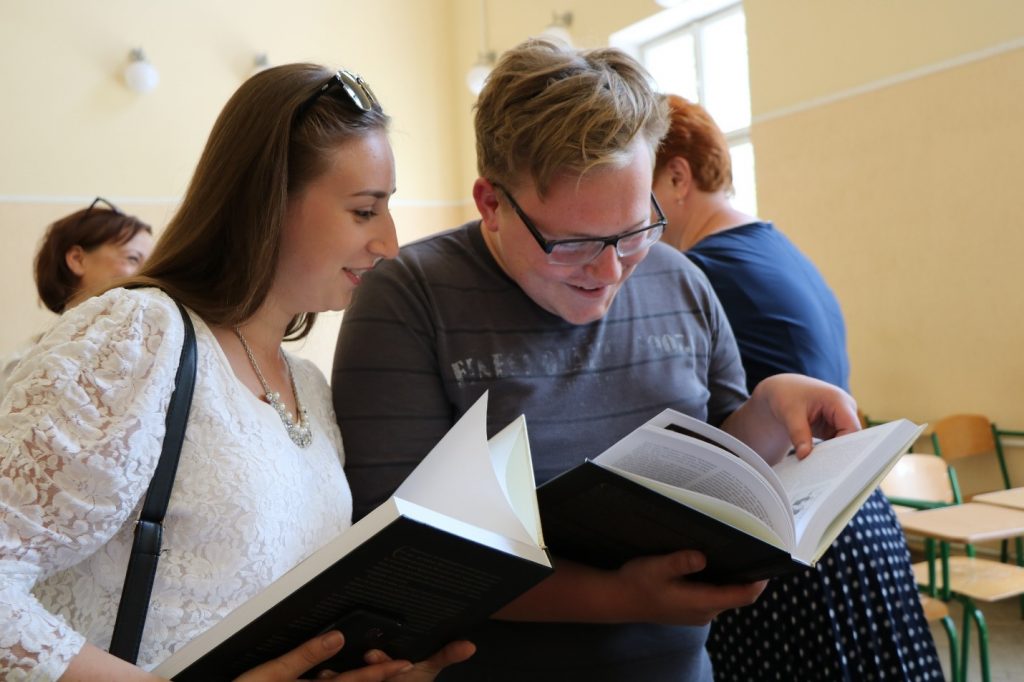 Historical memory and its treatment and interpretation will determine how Ukraine’s various ethnic groups see each other in the future. These were the principle themes at two talks sponsored by the Ukrainian Jewish Encounter (UJE) in western Ukraine this week. The presentations are part of an extended tour the organization has undertaken to discuss books supported financially by the UJE and other institutions.

Speaking to audiences in Mukachevo and Drohobych, Paul Robert Magocsi, co-author of the book Jews and Ukrainians: A Millennium of Co-Existence, underlined the fact that the Ukrainian-Jewish relationship has been marked by stereotypes, misperceptions, and destructive episodes. Yet by looking at the long arch of history over the last millennium, those periods of conflict and destruction for Jews who lived on Ukrainian lands where limited to six timeframes, totaling between sixteen and twenty years.

“Cannot these years of (perhaps boring) normality tell us something about Jewish life in Ukraine as being something other than unmitigated tragedy?” he asked. “Granted, most individuals are likely to feel more comfortable with knowledge they already have, regardless whether or not it may be based on impressions, stereotypes, or simply what they call feelings.”

Vitaliy Nakhmanovych, lead researcher of the Kyiv City Museum, spoke of the interconnectedness of the Ukrainian-Jewish experience and the importance of historic memory in shaping relations between the country’s various ethnic groups and communities.

His volume, Babyn Yar: Memory Against History’s Background, is a catalogue published of an exhibition about Babyn Yar that took place at the Kyiv City Museum in September 2016. The exhibition explored the history of Babyn Yar in its multi-layered complexity, and documented an attempt through an international landscape design competition sponsored by UJE to create a necropolis on the site that would honor the many lives lost there during World War II.

Babyn Yar, a ravine outside Kyiv, witnessed one of the greatest single crimes of the Second World War when on 29-30 September 1941 nearly 34,000 Jews were murdered at the ravine. Over the next several years an estimated 40,000 more Jews, as well as members of other communities, including Roma, Communists, POWs, Ukrainian nationalists, and mentally ill patients were also killed there.

Nakhmanovych noted that because of its complicated past, different groups lay claim to the site, and each community over the years has erected a monument to honor its victims.

He challenged audiences in Mukachevo and Drohobych by stating that it would be fair to ask why people in their locales should care about Babyn Yar.

Transcarpathia remained a relatively safe shelter for Jews until Nazi Germany occupied Hungary in 1944. On 30 May of that year, Mukachevo was deemed “Judenrein” [“free of Jews”] after the city’s Jewish community was sent to ghettos and deported to Auschwitz.

“We have to know what happened,” the participant said. “We have to build relations so this doesn’t happen again.”

When asked if Transcarpathia was addressed separately in the volume, Magocsi remarked that he and his co-author Yohanan Petrovsky-Shtern made the decision when writing the book to “take a whole approach to Jews in Ukraine rather than looking at separate regions.”

“Transcarpathia is part of Ukraine,” he said.

References to this and other particular regions, however, are evident in chapters that investigate religion, culture, art, and literature in the Ukrainian-Jewish dialogue. During the presentation it was noted that a Ukrainian-language translation of The Ukrainian-Jewish Encounter: Cultural Dimensions, will be published this fall. One of the essays in that volume looks at Ukrainian-Jewish relations in narrative accounts of former Carpatho-Rusyn Jews.

In a lively exchange, audience members in Drohobych said they noted a difference in how the country’s generations see the relationship between Ukrainians and Jews. Ukraine’s younger generation tend not see their peers through the lens of stereotypes and ethnicity, but rather simply as people, a view that bodes well for their country’s future.

Photos and video from the presentation in Drohobych, which took place at the historical faculty of the Drohobych State Pedagogical University, which was once a Jewish orphanage.