How a young woman from Ukraine protected religious Jews from terrorists

Recently I decided to visit a unique site in the Holy Land for the first time in my life: the grave of the biblical Yosef (Joseph). The Book of Genesis recounts how Joseph, the son of Jacob’s forefather, after his conflict with his brothers, ended up in Egypt, where he saved the country from starvation and became the second most important person after the pharaoh. Joseph was buried in Shkhem.

From the standpoint of Jewish mysticism, Joseph is the symbol of material success. The soul of a righteous person is connected to the resting place of his body, which explains why Jews have prayed at Joseph’s grave throughout the centuries, asking the Creator for well-being, a good income, and health.

But in recent decades the prayers of Jewish pilgrims at this gravesite have been greatly complicated by the fact that Israel transferred Shkhem to the control of the Palestine National Authority. Whereas in ancient times the grave was located on a solitary hill, today the complex surrounding the grave is smack in the middle of residential neighborhoods of an Arab town, whose residents are quite hostile toward Jews.

Thus, excursions to Joseph’s grave take place only a few times a year by advance booking, with every passenger vetted and under the protection of Israeli soldiers. In fact, every pilgrimage turns into a military operation conducted by the Israeli Defense Forces and special units of the border police.

The Israeli press occasionally reports that Breslov Hasidim, who are known in Ukraine for their pilgrimages to Uman to the grave of Rabbi Nachman, try to reach Joseph’s grave, individually or in groups, without the army’s protection (even though military orders forbid this). They walk through Arab villages and forests, cultivating courage in themselves and hope for the Almighty’s help. Local Arabs practically never harass the “Breslovites,” knowing that these fellows fear nothing and no one, but God. After such risky marches to Shkhem, a flight to Uman is an easy trip for them.

But Ukraine “found” me on this trip to Shkhem not just because of the Breslov Hasidim. I was sitting on one of twenty buses that were carrying over a thousand pilgrims. At 11:00 p.m. we arrived in the Israeli city of Ariel. At this point, Israeli soldiers armed with submachine guns and wearing helmets and body armor boarded each of the buses.

Two boarded our bus, and one of them was a young blonde woman, who, I guessed, was from a Slavic country. She protected our bus, issued commands to the driver, and communicated with her commander by radio.

Army jeeps mounted with machine guns drove in front of and behind the column of buses. As we approached Shkhem and in the Arab city itself I saw that all the side streets leading to our highway were blocked by posts of Israeli machine gunners and spike strips to prevent cars carrying terrorists from getting through. When we reached our destination at midnight, there was no one on the streets of Shkhem; its residents had been requested earlier not to go outside for a period of two hours until the pilgrims finished their prayers and left.

The prayer at Joseph’s grave took place in a rich and even joyous fashion. One of the participants of the trip was an engaged man awaiting his wedding, and after prayer, his friends performed merry songs and dances, after which they offered treats.

At 1:30 in the morning, we boarded the bus for the return trip. The same female soldier also boarded our bus. The only free spot on the bus was next to me, and I invited her to sit down, under the critical gaze of ultra-Orthodox yeshiva students, who do not approve of women sitting next to men.

The bus gained speed, leaving behind deserted Shkhem. A scene flashed in the darkness outside the window: Two men are kneeling on the roadside with their hands behind their heads, and a few Israeli soldiers are aiming submachine guns at them (in the morning I read a report in the news about the arrest on the outskirts of Shkhem of two terrorists who were planning an attack on pilgrims).

I spoke to the young woman and asked her what country she was from. “From Ukraine,” she said. It turns out that her family was from Sloviansk, in Donetsk oblast. We began talking. I told her that I had visited Sloviansk a couple of times during my childhood; we were vacationing there at the Siversky Donets River and the local mineral waters.

These were surrealistic sensations: We were speeding through dangerous areas of the Palestine National Authority, recalling the beaches, forests, and spas of Siversky Donets. It turns out that we had childhood impressions and recollections of Sloviansk in common.

“My grandmother and grandfather still live there. In the summer of 2014, they hid in the cellar from the shooting,” said the female soldier with a submachine gun.

I asked her, “There are 50 young yeshibotniks here, many of whom are unlikely to have served in the army, but you, a young woman, have to protect them. How does that situation strike you?" She replied: “I have gotten used to it, but sometimes I am offended that they don’t value this and often treat me disrespectfully. I generally serve in Hebron. We were transferred especially to provide protection for your trip to Shkhem. My name is Berta.”

We were now flying past Jewish settlements. And I was thinking about strange coincidences of names. In my childhood, I was “protected” by my great-grandmother, Berta Volynska, and this night I was being protected by Berta with roots in Ukrainian Sloviansk (at left in below photo). 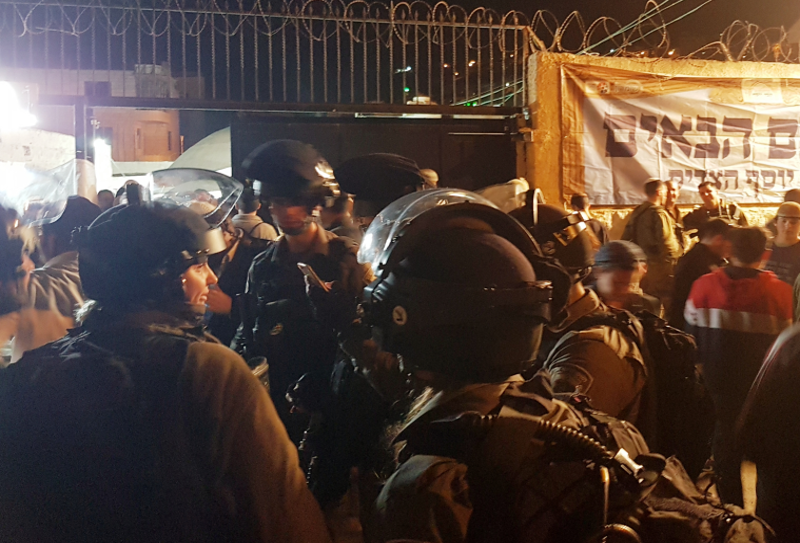