As the winter season accelerates into its darkest moments, many cultures have developed holiday rituals to mark the passage of time and to place hope in the return of brighter days. A remarkable concert at the University of California, Berkeley on 9 December 2015 offered a unique opportunity to incorporate several ensembles into this celebration. What is even more remarkable is that this concert, entitled Rizdvo! A Celebration of Ukrainian Winter Songs and Carols, featured for the most part a multi-ethnic cast of singers who have no background or knowledge of Ukrainian and yet presented a stunning performance of complex Ukrainian musical compositions.

Marika Kuzma, who has directed the choral program in the UC Berkeley Music Department for twenty-five years, was spectacularly successful in teaching and bringing together her students with the music of her Ukrainian cultural heritage. Her collaborators in this special performance included five touring koliadnyky, or carolers, from the village of Kryvorivnia high in the Carpathian Mountains of western Ukraine and the third-generation American bandurist Julian Kytasty, whose mastery of the traditional styles of playing the Ukrainian national string instrument of the bandura is combined with a distinctly contemporary sensibility. The start of the concert was dramatically announced by two koliadnyky on the trembita, or mountain horn, which is made of a hollowed pine tree that has been struck by lightning and wrapped in birch bark. The Chamber Chorus, the university’s premier concert choir of thirty-eight voices, entered in a procession with Ukrainian folk carol melodies. They were followed by Carpathian folk carols by the koliadnyky and the eighty-voice University Chorus in a “greeting.” Every year in January during the Christmas season, the holiday celebrated according to the old Julian calendar, these very koliadnyky who visited California travel through the deep snows of their native region to visit neighbors in their village to deliver musical messages of joy, encouragement, and gratitude in their pre-Christian winter solstice and Epiphany songs. 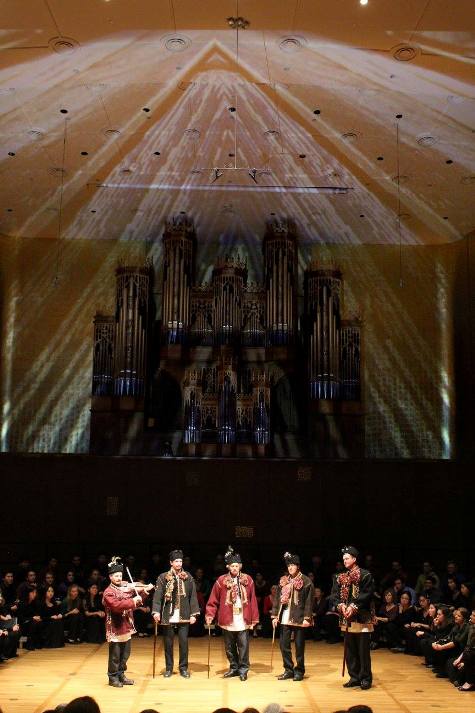 The concert’s “Music for the City” section included classical works by Dmitry Bortniansky and Alexander Koshetz. The Ukrainian-born Bortniansky, a contemporary of Mozart and Beethoven, composed choral concertos for the Russian Imperial Chapel in St. Petersburg and his music is highly influenced by the style of Italian composers with whom he studied. Koshetz studied choral directing and composition in Kyiv and worked with sacred Slavic chant melodies. 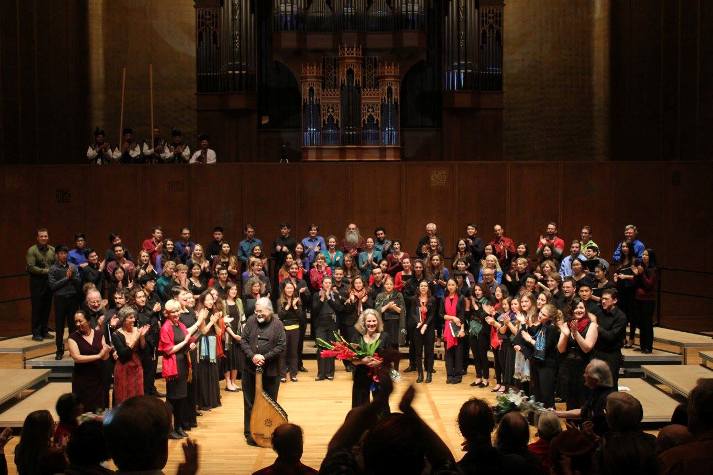 A folk instrument interlude with Kytasty on bandura and the koliadnyky on the tsymbaly, or hammer dulcimer, was followed by traditional carols arrangements for concert choir by the composers Vasyl Barvinsky, Yakiv Yatsynevych, and Bohdan Hanushevsky and concluded with the beloved favorite shchedryk, or Epiphany Carol, now known as the “Carol of the Bells” by Mykola Leontovych.

The True Life Trio, all non-Ukrainians, joined the second half of the concert with a selection of Epiphany and New Year’s carols sang in what is known as the traditional “hard voice” heard in various regions of Ukraine, some of them conveying a mix of dialects and languages. The trio’s specialization is to delve deeply into folk music that lends itself to three-part vocal harmony and to expand the boundaries of these traditional styles. 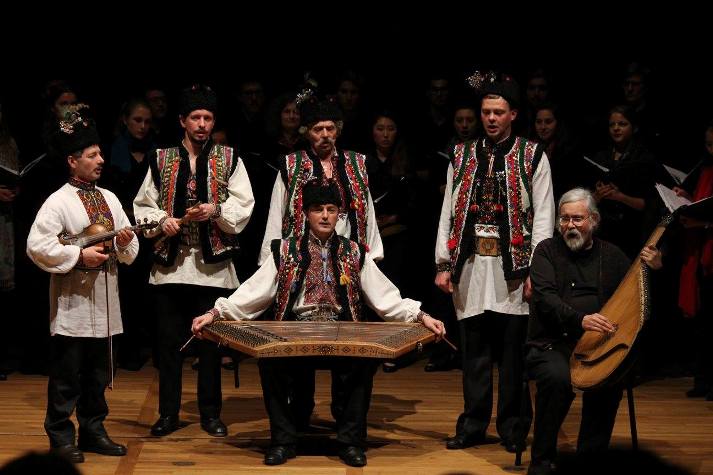 The cryptic and mystical lyrics of many Ukrainian Epiphany carols hail from the pre-Christian era and have no equivalent in the West. In the spare but evocative texts falcons fly onto windowsills or swallows onto fence posts, and young men saddle up their horses. Epiphany Eve (Shchedriy Vechir) in Ukraine differs from the Roman Catholic feast day of the Epiphany in the West and its legends of the Star in the East or the visit of the Three Kings to the manger. In Ukraine Epiphany is celebrated twelve days after Christmas and is related to the story of Christ’s baptism in the Jordan River. The manifestation of the divine in that story is the arrival of the Holy Spirit in the form of a dove and the sound of God’s voice calling to Christ. Ukrainian rituals for Epiphany include water and villages often construct crosses from the frozen waters of rivers or ponds.

The concert paid homage to new creative trends and contemporary Ukrainian Epiphany music was represented by pieces created by Lesia Dychko, a professor of composition at the Kyiv Conservatory, and the Kharkiv theater director Yuriy Alzhniev. 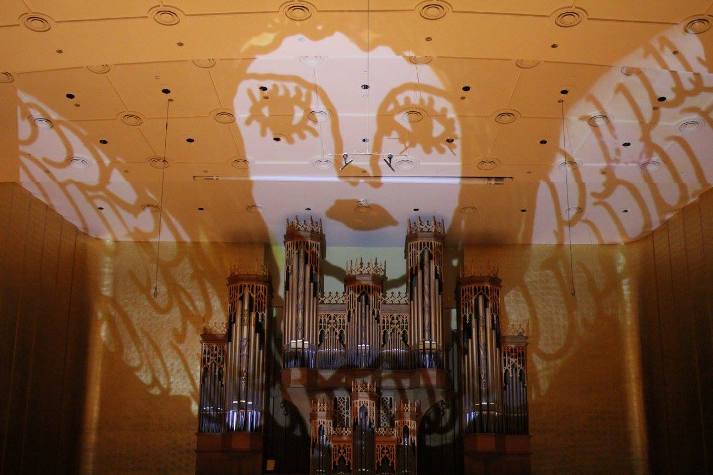 After additional folk instrumentals by the koliadnyky and Kytasty, all the performers gathered to offer a dynamic montage of music to address “Heaven and Earth” and to offer a final blessing from Dychko’s “Winter” to proclaim “Let our song resound: a song of peace, joy, and good fortune.”

The trembita horns sounded once again to mark the conclusion of this extraordinary musical journey. The visiting koliadnyky would be soon heading back to their Carpathian village to perform the ritual that is now part of Christmas but is much older in its origin, traditions, and symbolism. They will visit every household to play and sing a specially chosen song to each member of the family, both living and recently deceased. These ancient songs hold magical powers. Spring will not arrive until they are sung.

And on this day, to all those who celebrate—or don’t celebrate—the various festivities at this time of year, we would like to express the Winter Season’s Blessings to our readers.