“It is important to re-evaluate Ukraine as a territory of freedom and patronage, a defender of minorities”— Oles Kulchynsky 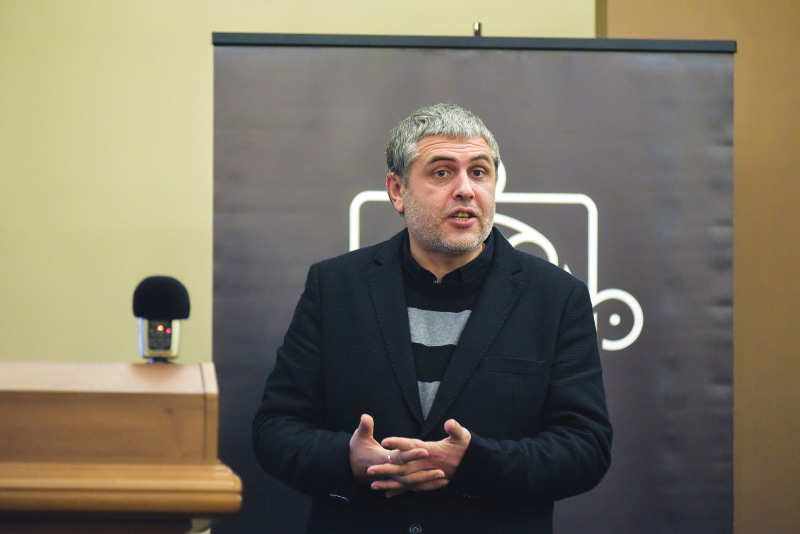 We are talking about the South of Ukraine, the intersection of cultures and civilizations.

Our guest on today’s show is the Orientalist and translator Oles Kulchynsky.

Oles Kulchynsky: The Black Sea Lowland [Prychornomoria] is an organic continuation of the Mediterranean region; historically, it belongs to the Mediterranean civilization. The more southerly territories—the Ottoman Empire—are a constant symbiosis of various cultures, where Armenians, Greeks, and Jews lived. In terms of the composition of its population, the Ottoman Empire was more Christian than Muslim.

If we look today at the Ukrainian South, which was settled in the nineteenth century by Jews, German colonists, remnants of the Nogay and Crimean Tatars, then the naked eye can spot a certain tribute to maritime traditions; it is reborn again; you can see multicultural diversity.

If we look back to the history of the Ottoman Empire, there is an immensely popular idea circulating throughout Turkey, according to which the Ottomans have nothing in common with Turks; they too oppressed the Turks. There is also a phenomenon that very much resembles what we are seeing in Moscow today. In Turkey today, there are attempts to apply the term “Ottomans” to all the subjects of this empire. A similar phenomenon—a fusion from Syria to Egypt—was characteristic of the Mediterranean world until then.

Vasyl Shandro: Your article “The Dead of the Steppe: A Jewish Cemetery on the Banks of the Inhul River, a German Church alongside, and Fear after the Holodomor,” prompted me to talk about the Ukrainian South. In it, you write about a cemetery. Where is it and what is it?

Oles Kulchynsky: It is in Bashtan raion, Mykolaiv oblast. If you look at the geography connected with the colonization of the steppe, then within a radius of twenty to thirty kilometers you will see settlements of Jews, Old Believers, Germans. This also demonstrates the structure that is formed in the seventeenth to nineteenth centuries. At first, you will find places associated with Old Believer weavers and Cossack settlers, just like in the village of Pryvilne.

Vasyl Shandro: What evidence points to this history? Does it prove something?

Oles Kulchynsky: As an Orientalist, I am interested in the extent to which these ancient forms can still be seen to this day. It is easy to observe how some ethnic groups disappear and in place of them appear Armenians, who fled from Nagorno-Karabakh; or Roma settlements. We are discussing the fact that one cannot treat such phenomena categorically, as though everything belongs only to Ukrainians.

At that cemetery in Pryvilne, you will suddenly notice that even contemporary graves are marked by the Old Believer cross. In people’s everyday lives, in their models of behavior, something economic will be established. This is not bad at all. Moreover, it will also be reflected in language. Some things are exceedingly difficult to research because during the Soviet period there was a policy of forgetting and erasing memory.

Again, this is something that is inherent in the steppe part of Ukraine: It is a tumbleweed, when everything disappears, starting from the Pechenegs, few traces of whom remain.

We have a partial lack of understanding of the people of the North, the people of the South. It is truly awful to observe how people forget. They seem to remember that someone died during the genocide, during the Holodomor, but in general, everything turns into “Who cares?” for some reason.

Vasyl Shandro: Are Jewish settlements typical for that part of Ukraine?

Oles Kulchynsky: For that period—yes. It is precisely in the nineteenth century that a special reverence for the land emerges in the Jewish milieu; these are the prototypes of contemporary Jewish kibbutzim. We see the spread of philosophical teachings which state that land will be the salvation of the Jewish people; settlers rush there. What is interesting is that already by the second half of the nineteenth century Lutheran Protestants are sent there as special overseers. A large Lutheran village is established next to them.

The Russian Empire allots the worst lands to both of these groups of colonizers. Traditionally, both the Germans and the Jews turn these lands into the best. During the Soviet era, cemeteries were dismantled and covered up with soil.

Alongside stood a German village, where German colonists once lived. It is exceptionally beautiful and sophisticated there, with a dilapidated old, nineteenth-century, Lutheran-style kirche [church] that is not even recorded in the Monuments of Ukraine Register. This is not a one-off example; there are many such churches in our South, but they have all tumbled down. Later, there were settlers from Western Ukraine.

Four or five years ago people dismantled one wall of the church and its wooden doors. On the one hand, this is the burdensome “Soviet” legacy, but on the other, this is truly a humanitarian catastrophe.

Vasyl Shandro: Were cemeteries filled in artificially, or is this something that happens over time?

Oles Kulchynsky: We did not question residents closely, but they were ruined sometime after the Second World War. Over time they were covered over. People grazed cows there peacefully; below, there is a water pump. We did not even approach the other place.

We also know about a place where Jews were shot in this large village—Pliushchivka, formerly known as Yaffe Nahar, which means “Beautiful River” in Hebrew. Long ago, the Inhul River rushed ahead. Right now there is a huge problem with water.

Vasyl Shandro: Were there Cossack settlements?

Oles Kulchynsky: Without a doubt. This is a borderland, the intersection of the territory of the Crimean Khanate and Zaporozhian freedoms and privileges, where people’s characters had to be kept in check so that conflicts did not erupt. This is the village of Pryvilne. It is interesting to see how it was divided. On one side were Cossack settlers, Cossacks; on the other were Old Believers. One part of the village christened the other part of the village the “Rus′ land.”

Vasyl Shandro: What is interesting about this coexistence?

Oles Kulchynsky: I think that in the context of the current Ukrainian-Russian War, it is important to re-evaluate the territories of Ukraine; above all, to develop awareness of them as territories of freedom, a kind of patronage, a defender of minorities, which gives them the right to develop freely.

Again, we automatically take the patron-states of these minorities as our allies in the Ukrainian-Russian War. This is something similar to the Ottoman principle whereby Orthodox and Protestants were protected from Catholicism. This is a model that could be suitable for Ukraine. In the Mykolaiv and Kherson regions after the annexation of the Crimea, this model is clearly visible where there are Crimean Tatar settlements. It is strange that the state has not taken them under its protection.

Ukraine could be a unique moderator of various cultures. One should not be afraid of this.

We are destined to seek some forms that will protect us ourselves. One of these forms—attraction based on the right to choose—can be quite effective. When we talk about the South of Ukraine, Ukrainians with a broken national memory will often be a problem there. It is terrible to see people promoting pobedonosie [mania for victory at any cost]. An extraordinarily complex set of questions arises: Will such multiculturalism, which in and of itself traditionally hangs over this part of Ukraine, be a salvation for Ukrainians themselves to a great extent?