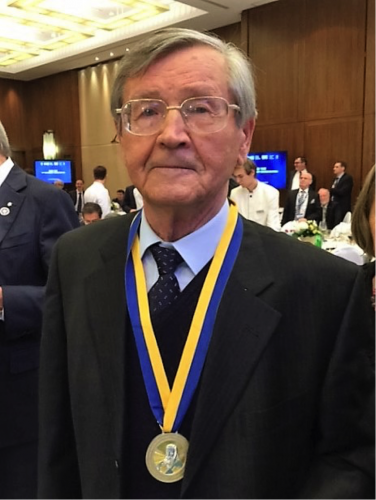 Ivan Dziuba, writer and former dissident received the Metropolitan Andrei Sheptytsky Medal for 2016. The award, conferred by the Jewish Confederation of Ukraine and the Ukrainian Jewish Encounter, was presented at a dinner on September 28, 2016 in Kyiv, Ukraine in commemoration of the 75th anniversary of Babyn Yar.

Mr. Dziuba was recognized for his decades-long commitment to human rights and fostering dialogue between nations. He was an authoritative voice during the repressive Soviet period, speaking out against xenophobia and antisemitism and working for national reconciliation.

“The Third Metropolitan Andrei Sheptytsky Medal is conferred upon Ivan Dziuba, who fifty years ago spoke before a group of brave Jews and Ukrainians courageously gathered at Babyn Yar to remember the 34,000 Jewish victims of the 1941 mass murders, risking persecution of the Soviet state,” James C. Temerty, board chairman of the Ukrainian Jewish Encounter said before conferring the medal on Mr. Dziuba. “Through his heroism, humanism, and moral clarity, he exemplified the spirit of Metropolitan Andrei.”

The dinner was co-sponsored by the World Jewish Congress, the Jewish Confederation of Ukraine and the Ukrainian Jewish Encounter.

In 1966, during an impassioned speech at a non-sanctioned gathering to commemorate the 25th anniversary of Babyn Yar, Dziuba, then 35, spoke of the dangers of silence—which he called “the accomplice of lies and captivity”—by a Soviet regime that manipulated or ignored the historical truths of the tragic fate of Jewish victims.

In that speech Dziuba also forthrightly condemned the official and popular antisemitism he saw among some of his own people. “As a Ukrainian, I am ashamed that in the midst of my nation—as among other nations—there is antisemitism, and there are those shameful, despicable human manifestations that bear the name of antisemitism.”

Ivan Dziuba was born in 1931in the Donetsk region of Ukraine. He came to prominence during the emergence of a postwar generation of writers who revitalized Ukrainian literature. He was active in the dissident movement of the 1960s against the persecution of the Ukrainian intelligentsia and Internationalism or Russification?, a widely-translated critique of Soviet policies published in the West in 1968 that led to his arrest, imprisonment, and enforced professional isolation.

Dziuba re-emerged as an important public figure after Ukrainian independence and served as Ukraine’s Minister of Culture from 1992 to 1994. He is a member of the National Academy of Sciences of Ukraine, where he has been a prolific contributor to Ukrainian literary criticism.

The Ukrainian Jewish Encounter has dedicated efforts to advance the global recognition of the legacy of the legendary Ukrainian Greek Catholic Church Leader Metropolitan Andrei Sheptytsky, one of the towering Ukrainian leaders of the twentieth century. UJE’s efforts were advanced when the Jewish Confederation of Ukraine created the Andrei Sheptytsky Medal. The award was established for contributions to the cause of Ukrainian-Jewish understanding and cooperation and is awarded to people who have dedicated themselves to fostering relations between the Ukrainian and Jewish peoples.

Born in 1865 to a prominent aristocratic family, Metropolitan Andrei Sheptytsky was the spiritual leader of the Ukrainian Greek Catholic Church from 1901 until his death in 1944. During World War II, he helped save more than the 150 Jewish lives. The Metropolitan sheltered Jews in his own residence at great personal risk, and arranged for Church monasteries to protect well over one hundred Jewish children. Not one of them was betrayed or lost. Metropolitan Sheptytsky also publicly protested against Nazi Germany’s murderous policies towards Jews, alerted Pope Pius XII in personal reports about the mass murders taking place, and issued the pastoral letter Thou Shalt Not Kill in November 1942, urging his parishioners not to participate in Nazi atrocities. The Metropolitan is a model worthy of celebration and emulation, providing a basis for building trust and bridges between communities.