The Living Museum: How to Present the Cultural Traditions and Heritage of European Jews 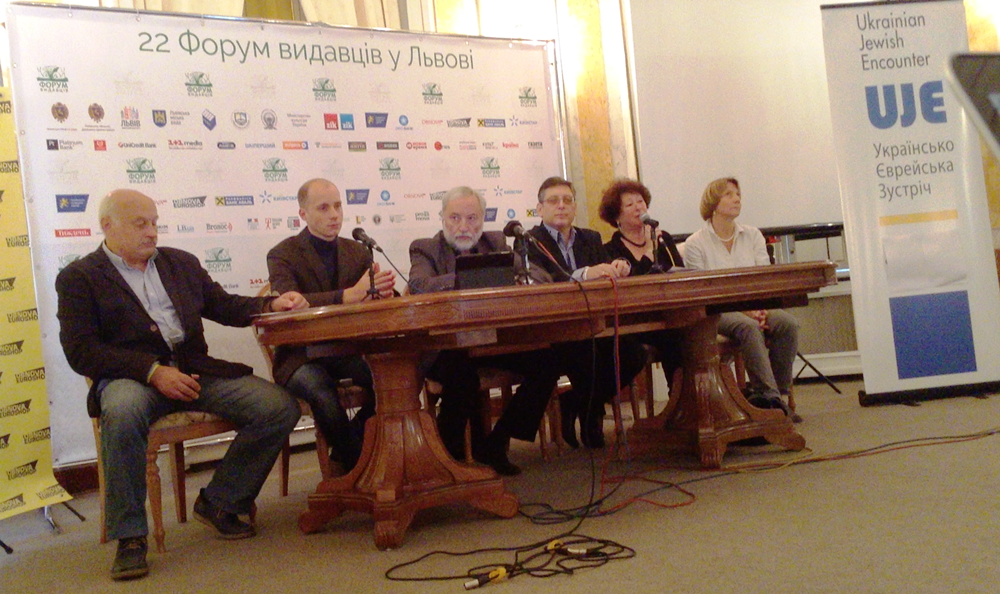 A very lively discussion on the once and future role of Jewish museums in Ukraine and their place in the greater European context, as well as how best to honor the Jewish past of Lviv, took place on 13 September 2015 during the Ukrainian Jewish Encounter-sponsored series of events at the Lviv Book Forum.

Adele Dianova, director of the Ukrainian Jewish charitable foundation Hesed-Arieh, underlined the poignancy of much of the current work of Jewish organizations seeking to preserve memory in Ukraine—and indeed in all of Europe—and the need to celebrate the vitality of current communities. “We didn’t know our past, we wanted to gather our shattered remnants. We can do monuments to the dead, renew cemeteries.” However, she pointed out her organization has also other life-affirming approaches, especially during the annual musical KlezFest held in Lviv. “This year we had five to six thousand people on Market Square. We sang [the renowned Ukrainian folk-pop song—ed.] “Chervona Ruta” with the visiting New York City rock-klezmer band Golem. It warmed the soul.”

The art historian Vita Susak, director of the department of European Art at the Lviv National Art Gallery, looked at both the national and pan-European perspective.  “We need a Jewish museum in Lviv but we are late,” she pointed out. She did note however that Warsaw just opened its Jewish museum in 2013 and that the role of Jewish museums in Europe is undergoing a reevaluation. “I was at a museum conference in Munich two years ago and the question was posed: should a Jewish museum be in a ghetto among museums or deal with the problems of society in which it operates? What kind of Jewish museum should we have in Lviv? We have to think where, and for whom, and how it will function. How should it operate in the contemporary cultural space of Lviv?”

Josef Zissels, vice-president of the World Jewish Congress and chair of the Euro-Asian Jewish Congress, was forthright and challenging. “I’m not a historian, or a museum specialist,” he drily noted. Zissels however pointed out he was instrumental in helping to establish the highly regarded Chernivtsi Museum of the History and Culture of Bukovinian Jews, which opened in 2008.  “I can be a generator but I haven’t been able to find a colleague here who can carry the load. It’s very important for Galicia to have a museum—a museum that talks with the visitor. In a museum you should feel the time in which the people lived. You should feel the history.”

In the discussion as to whether Ukraine would be better served by one large major Jewish museum as in Warsaw, or many regional museums, Zissels stressed one very important factor. “There is no history of the Jews, but many histories. There is a common European identity, but the form of Jewish identity varies. Over the course of 200 to 300 years Bukovynian and Galician Jews began to differentiate. In Bukovyna it was very important to talk about this differentiation. We have a debt to these previous generations who built this world.” He also praised the Jewish museum established in Odessa.

Ihor Shchupak, from the Tkuma Ukrainian Institute for Holocaust Studies and director of the Jewish Memory and Holocaust in Ukraine Museum, proudly noted that Dnipro has one of the biggest Jewish museums in Eastern Europe. “Of course there is a saying when you have two Ukrainians you have three hetmans and if you have two Jews you have three synagogues,” he joked.  “We want to show that Jews lived among other people,” he said. “We should show Jews in the context of their societies and countries. Yes, there was the Holocaust, death, and destruction, but Jews created a civilization, a part of Ukrainian and European civilization.”

Public outreach is a very important element in the activities of the Dnipropetrovsk Jewish Museum. “Once a month we have a specialist guest who provides a historical narrative,” said Shchupak. “We have fifty to three hundred people who come for a dialogue. The museum is alive when society operates around it. We have had events on the Armenian Genocide, the Crimean Tatars, the Revolution of Dignity, and the anti-terrorist operation [in Donbas—ed.].  A museum should operate in the Ukrainian context. We were the first in Ukraine to have an exhibit on [Ukrainian Greek Catholic Metropolitan] Sheptytsky. A museum is alive when it deals with the most sensitive topics and society revolves around it.”

Dianova pointed out that Lviv had a wonderful Jewish museum up to the Second World War. The collection was distributed among four other Lviv museums to safeguard the artifacts. She noted the Ukrainian state now owns these items and “will never give them up.”

Zissels in response noted that the four Lviv museums—the History Museum, the Museum of Religion, the Ethnographic Museum, and the Lviv Picture Gallery—do not display most of their collections but put in long work to catalog them. “We can create one of the best Jewish museums in Europe from these artifacts, which can be loaned on the basis of branch exhibits from the other museums. But we need a leader, a generator.”
A voice from the audience cried out, “It will never happen!”

In response to the impassioned outburst Shchupak calmly asked, “Then how was it done in Odessa and Chernivtsi?”

Zissels, in a concluding remark referring to comments that a state-sponsored museum is necessary, reminded the audience, “I never counted on state money.”

The issues are complex and vexing and the panel discussion starkly outlined the challenges ahead for the Jewish community of Lviv in finally establishing a proper presence in the museum sphere.