"Memory Wars" and the Ukrainian-Jewish dialogue in Israel

The international seminar "Above and around the Ravine: Memory Wars in Ukrainian-Jewish History, the Traumas of the Holocaust and the Holodomor" took place on 11–13 November 2021 in the city of Netanya, Israel.

The nongovernmental organization Israeli Friends of Ukraine, with the support of the Canadian charitable non-profit organization Ukrainian Jewish Encounter (UJE) and the Embassy of Ukraine in Israel, held its sixth seminar discussion (since 2016) on the most acute problems of Ukrainian-Jewish history.

The 2021 seminar was dedicated to the eightieth anniversary of the shootings of Kyivan Jews in Babyn Yar, and generally to the Holocaust in Ukraine. The participants examined this tragedy within the broad context of Ukrainian-Jewish relations and discussed how the problems of history and memory affect us today.

A key part of the seminar was devoted to discussions of memory wars: how they emerge and how they are fueled. Ukrainian and Jewish memories of the past, of the Holodomor and the Holocaust, are universes that do not intersect. Is a shared memory therefore possible? The question of how problems of history and memory affect Israeli-Ukrainian relations was also discussed.

Israeli participants and their Ukrainian guests discussed these and other topics in an atmosphere of openness and honest dialogue, which have defined all the previous seminars that have taken place between 2016 and 2020.

By fortunate happenstance, the seminar coincided with the brief period when Israel opened its borders to foreign visitors between 1 and 28 November. Thanks to this, Ukrainian historians were thus able to attend. Judging by the reaction of the Israeli audience, it was obvious how tired people were from communicating online and how much they had longed for in-person dialogue. 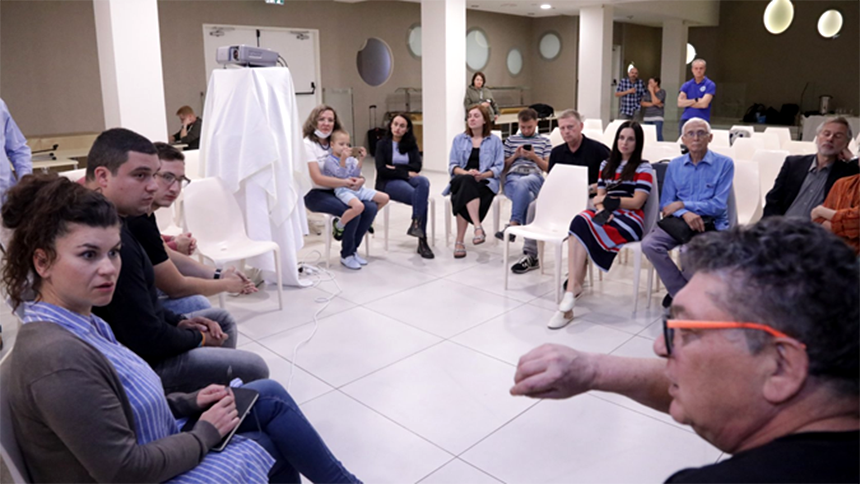 On the Ukrainian side, the forum guests included historians who have been studying issues relating to the Holocaust, the Holodomor, and historical memory for many years: Dr. Vasyl Rasevych (Lviv); Dr. Artem Kharchenko (Kharkiv); and Dr. Marta Havryshko (Lviv/Munich). The latter brought to light the women's theme in the twentieth-century tragedies that unfolded on the territory of Ukraine.

Andriy Usach and Hanna Yatsenko from Lviv screened their documentary films and videos from the Voicelessness series showcasing Ukrainians' recollections about the Holocaust and Soviet repressions.

Professor Wolf Moskovich (Hebrew University of Jerusalem), a member of UJE's Board of Directors, talked about the little-known memoirs of a Jew from Uman who survived the Holocaust.

At the seminar's first roundtable, the guest of honor was Evgeny Sova, Member of the Knesset and the co-chair of the Israel-Ukraine group in the Israeli parliament.

Evgeny Sova is a native of Ukraine. He is actively interested in topics relating to Jewish-Ukrainian history. In 2018, when he was a television journalist, he delivered a speech at a similar seminar. In 2021 he spoke in his capacity as a politician who deals with topics relating to Israel and Ukraine. Sova emphasized that he would do his best to ensure that the Holodomor topic is included in Israeli school textbooks.

The Ukrainian view of problems connected with "memory wars" was presented via Zoom by Dr. Anton Drobovych, director of the Ukrainian Institute of National Remembrance.

The final roundtable at the seminar was devoted searching for ways to reconcile the historical memory of Jews and Ukrainians.

Among the more than fifty Israeli participants of the seminar were highly qualified professionals. The feedback from two participants is cited below:

Mila Vaisman, Coordinator of Social Projects for the Shikmona state company in the city of Nof HaGalil
"We would like to thank our Ukrainian friends for the interesting dialogue, disputes, and lessons. Mr. Vasyl Rasevych, your position, which is courageous and genuine, elicits immense trust! Artem Kharchenko, Marta Havryshko, Andriy Usach, and Hanna Yatsenko — thank you! Many thanks to Prof. Wolf Moskovich and all the organizers of the forum.

You are declaring courageously and openly that Ukraine and Israel can and should stand together; our peoples are united in their past and present; we have a lot in common! We can and should support one another, correct mistakes, and continue to love one another!

As a sequel to the project, in the city of Nof HaGalil, Alexander Vaisman and I told the participants of our programs about these seminars that take place every year, and they sparked a lot of interest because there are many natives of Ukraine among our listeners. There are also families in which Jewish and Ukrainian roots have become intertwined. Their family stories may be of great historical and sociological interest, and they can be used in further research and future projects."

Olena Holtzman, practicing psychotherapist, Tel Aviv
"People in Israel are sometimes zombified by Russian television, and they think that Ukraine today is run by a crazy nationalist junta. I spent three days at the seminar organized by Israeli Friends of Ukraine. Along with Ukrainian and Israeli historians, we discussed the problems regarding perception of the Jewish tragedy in Babyn Yar; we talked about violence against Jewish women during the Holocaust, and about executioners and Righteous.

Today, unfortunately, we often observe an ideological battle between two memories, Ukrainian and Jewish, about the Holocaust and the Holodomor. The easiest path is the mutual settling of accounts and accusations, a comprehensive search for Jewish surnames among the individuals who were involved in the Holodomor, and a tally of the Nazis' Ukrainian accomplices. There is no doubt that both of our peoples are deeply traumatized.

I would like to add the view of Israeli psychologists on this issue that has affected many generations. In our psychotherapeutic community, this is called national trauma, that is, the suffering caused by belonging to a particular nation. Over the course of centuries until the present day, we have been persecuted only because we are Jews. Deportations, expulsions, pogroms, the Holocaust, the wars in which Israel was compelled to take part since 1948, terrorist acts, the shelling of peaceful cities — all this triggers an array of psychological disorders known under the general term of national trauma.

NATAL, the Israel Trauma and Resiliency Center, which offers psychological support to such victims, has been in operation since 1998. It has developed methods for treating traumas and Post-Traumatic Stress Disorder. Our specialists teach their colleagues all over the world. Their expertise was even sought by the U.S. after 9/11.

If we are talking about people who are living on the territory of contemporary Ukraine, we can trace parallels connected with the Holodomor, the forcible Sovietization of the western oblasts, repressions, deportations, and the displacement of Poles and Ukrainians from their areas of compact settlement to new areas in their countries. Trauma disorders have been amplified by the annexation of Crimea and the military actions in the Donetsk region, where civilian lives have been lost.

As for national trauma, we must understand that it cannot be overcome, but it must be treated. We are human; we will always retain our memory and our pain, but at the same time, we can build a life for ourselves, love and raise our children, and draw conclusions from our own personal and national histories. We, Jews and Ukrainians, can help one another."