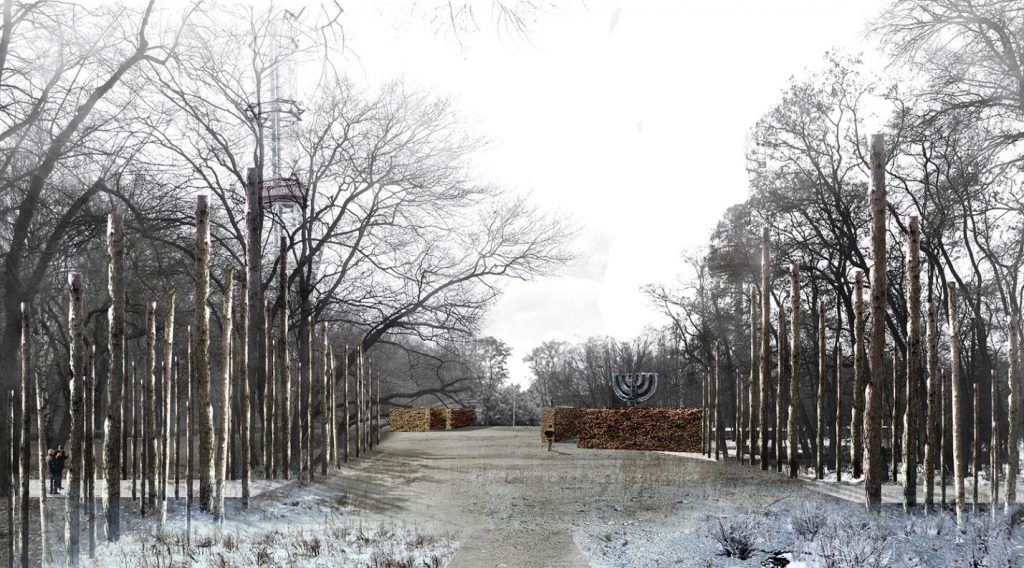 Babyn Yar, the ravine on the outskirts of Kyiv, Ukraine, is a multi-ethnic and multi-faith necropolis. A city of the dead.

In September 1941, nearly thirty-four thousand Kyivan Jews were shot over two days in one of the largest single Nazi massacres during the Second World War. More massacres followed during the German occupation. The victims included even more Jews, as well as Ukrainians, Soviet prisoners of war, communists, Roma, and others. Some estimates of those killed at the site total up to one hundred and fifty thousand dead.

After the war the Soviet regime tried for decades to destroy the ravine itself, as well as the national and ethnic identity of its victims. The Soviet authorities manipulated the memory politics of Babyn Yar.

The controversies continued after Ukrainian independence in 1991. There was a jumbled and uncoordinated proliferation of competing monuments to the various victims. There was an overall physical neglect of the site. Babyn Yar turned into a chaotic space. A space that does not properly reflect the significance of the tragic events that took place there.

Support for the competition was provided by the National Organizing Committee on preparation and holding of events in connection with the 75th anniversary of the Babyn Yar tragedy, as well as the Ukrainian Institute of National Remembrance and the Department for Urban Planning and Architecture of the Kyiv City State Administration.

The objective is to create a space of reflection and acknowledgement of the tragic events that occurred at this site in the past. The idea is to unite contemporary citizens of Ukraine of all ethnic backgrounds in the spirit of mutual empathy for past sufferings. To affirm the value of every individual human life. And to encourage aspirations for a just and humane society.

The principal goal is to create a comprehensive memory site—the “Babyn Yar—Dorohozhychi Necropolis” memorial park. The park will transform the area into a site conducive to reflection and respect for the victims that lie here. At the same time, this site must remain open to memorial efforts down the road. And these efforts should result from dialogue and the cooperation of different communities in Ukrainian society.

An international and Ukrainian jury of architects and historians discussed the results of the competition in Kyiv in late June. The Jury congratulated the candidates for addressing such a complex site in their submissions. The Jury did not feel that any one entry answered the issues raised in the competition. All the winning projects left unanswered questions. The jury decided by unanimous vote to award two second prizes to the two entries that best addressed the main issues.

Prize-winners included the Slovenian architects Jana Petkovic, Nejc Lebar, Maja Valentic, and Milos Kosec. For them, topography became a weapon of extermination at Babyn Yar. The leveled ravine was the linking element of the massacres. The physical destruction of the topography was directly linked to the need to erase the memory of the events that took place here. To commemorate the events therefore requires a topographical act of resistance to erasure. In their plan, a new layer is inscribed on the existing topography. A layer that makes the erasure perceptible.

This layer takes on the form of measurement devices. The devices are stainless steel markers on the level of the current terrain. The markers are engraved with measurements indicating the difference between the current and erased topography, enabling the individual to virtually see the erased ravine.

The memorial design is both discreet and everywhere. The markers cover all surfaces of the once existing ravine. The markers always remain the uppermost layer of the site regardless of the way the site is changed or developed. The design is infinitely adaptable and can be implemented in stages. The design can fit into future land developments while preventing suppression of past events.

The architects Connatural + Glenn Pouliquen from France and Colombia were also second prize winners. The spatial system on which their project is based addresses the problem of preserving coherence between the different memorial forms, and allows the memorial park to evolve in time with new forms of commemoration.

Part of the Project is based on the design of new infrastructure meant to unify the fragmented parts of the memorial, linking the site to the city by two different paths. One connects the different recreational spaces already present on the site. The other one is the path of remembrance.

The paths help to distinguish the memorial zones from recreational areas.

And the memory path connects the different monuments located all over the site, marking their unity. Hedges are planted around them, thus creating smaller and intimate spots, unifying the fragmented spaces of remembrance.

The competition brought forth interesting concepts from around the world. It is up to the landowners and authorized land users, as well other stakeholders and the wider public, to see these ideas put into action. The competition is seen as a first step in that direction.

The 4th prize winners, Danish architects Ieva Baranauskaite and Yang Wang, concisely articulated the challenges and moral imperative of this Babyn Yar competition. In their submission they quoted the words of the French philosopher Paul Ricoeur.

“History is about “truth,” they noted. “Whereas memory is about “faithfulness. Faithfulness to what ought to be remembered, what can be forgotten, what might be forgiven”