This collection of essays by a distinguished group of global academics presents an intriguing premise. Namely, a focus on culture illuminates crucial aspects of the Ukrainian-Jewish relationship often missed in standard historical accounts that only leap from crisis to crisis.

In other words, cultural interaction between Jews and Ukrainians that unfolded over centuries through diverse and daily encounters had a profound impact on both communities. 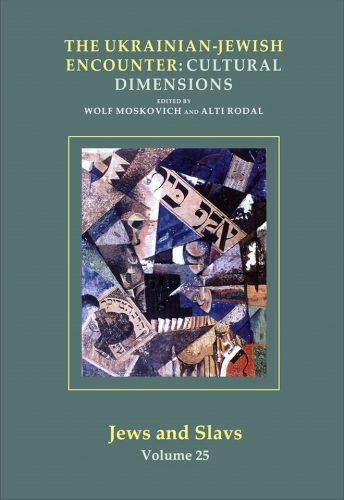 Culture shapes so many key aspects of life. The cultural history of Ukraine reflects long periods of normal coexistence between Jews and Ukrainians. This cultural history also set the broader context in which the Ukrainian and Jewish peoples developed. Cultural links also reflected the complex nature of their relationship.

The book emerged from a pioneering conference held by the Ukrainian Jewish Encounter in conjunction with the Israel Museum and the Hebrew University in Jerusalem. The conference, entitled: “The Ukrainian-Jewish Encounter: Cultural Interaction, Representation, and Memory,” brought together scholars from Israel, Ukraine, North America, and elsewhere.

The book, co-edited by Alti Rodal of the Ukrainian Jewish Encounter and Wolf Moskowitz of Hebrew University, addresses three major questions in the rich and varied history of cultural relations between Jews and Ukrainians.

First of all, in what ways did the Ukrainian and Jewish cultures influence each other? More specifically, what evidence is there of parallels or cross-cultural influences in specific cultural domains? These domains include folklore, folk art, music, and language.

Secondly, what were the prevailing perceptions or images of the “Other” as depicted in the respective cultures? In other words, how did each group view the other group, specifically in artistic representation, folklore, and literature?

And lastly, what approaches have been adopted by Jewish and Ukrainian ethnographers and art historians? How have these approaches, both in the past and in the present, apply to the study and preservation of the Ukrainian-Jewish cultural heritage? And how do they apply to the remembrance and revival of this heritage?

But the book is not only an investigation of the past. The collection of essays in this volume open doors for new research. There has been very little focused research on Ukrainian-Jewish cultural interaction. And this new research can help create a joint narrative for Jews and Ukrainians.

The richly illustrated book appears within the series Jews and Slavs published by the Hebrew University of Jerusalem. The book was introduced internationally at the Jerusalem International Book Fair on June 12, 2017.  A Ukrainian-language translation is forthcoming.

Listeners can find information on how to order a copy here.