The beautiful Western Ukrainian city of Lviv has over the past few years blossomed as an artistic and cultural center, a center that is increasingly featured in the itinerary of European and global artists. 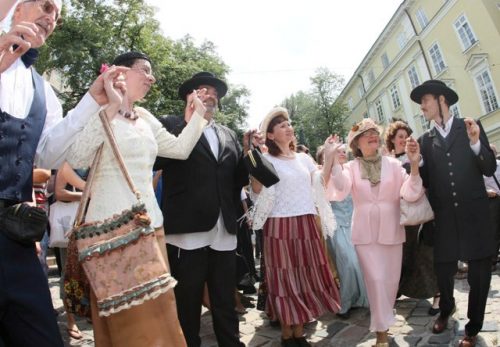 The city now holds numerous festivals of national cultures. They present a full menu of events in cuisine, literature, theatre, music, as well as the visual and decorative arts.

A major goal of such events is the rediscovery and appreciation of national traditions. Lviv has a long, honored, and rich history of various ethnicities. And they all have contributed to Lviv’s cultural mosaic.

Jewish culture is without a doubt a fundamental element to the city’s common cultural heritage. A lively and yearly celebration of Jewish culture is now one of the highpoints of Lviv’s summer calendar.

LvivKlezFest, the international festival of Jewish music, was started in 2009 to reconnect with the lost Klezmer musical culture of Jews living in Galicia.

Klezmer music has enjoyed a dynamic revival and popularity in many countries hosting the Jewish Diaspora. The Lviv festival has in turn grown in scope, attracting an increasing number of international musicians who have returned to perform in one of the historic homelands of Klezmer.

The Lviv festival was organized by an initiative of the All-Ukrainian Jewish Charitable Foundation “Hesed-Arieh.” The American Jewish Joint Distribution Committee, the Lviv city and regional governments, foreign embassies, and many public and private organizations have co-sponsored and partnered with the festival.

Throughout August, Lviv was an open-air stage for Klezmer music, dancing, singing, as well as exhibitions, lectures, tours, workshops, and Jewish cooking shows.

Major highlights of the festival included the opening concert in Lviv’s Philharmonic Hall with world-renowned jazz pianist Vadim Neselovsky, who was born in Odessa. He performed with the Youth Symphony Orchestra.

Other crowning moments included performances and a master class on the crossroads of Jewish and Ukrainian musical heritage presented by the American musicians Michael Alpert and Julian Kytasty.

The violinist Alpert is a pioneer in the renaissance of Klezmer music and Yiddish culture. Kytasty is one of the world’s premier players of the Ukrainian lute-harp, or bandura. Together they have explored two musical traditions that have co-existed and interacted for centuries.

Ukraine has faced many daunting security and political challenges when it finally embarked on a path to European and global integration.

The emerging strength of a diverse civil society, solidarity, and an appreciation of all cultural heritages have proved decisive in meeting these challenges.

And so it is with LvivKlezFest.

The rallying theme for the festival this year was “Jews for Peace and a United Ukraine.” Ada Dianova, the chairperson of the organizing committee of the festival, underlined this positive and inspiring message. She told the Lviv newspaperHigh Castle, “We want to show everyone that life here continues and that we will not be defeated. We will flourish and grow and no one can break us.”