A difficult maneuver between politics and memory: The President of Ukraine at the Holocaust Forum in Jerusalem 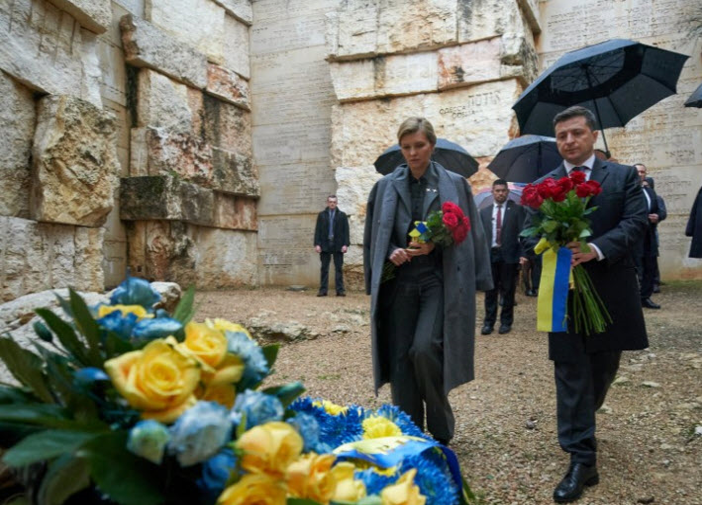 Ukraine could well have been lost among the four dozen countries at the global forum in Jerusalem dedicated to the 75th anniversary of the liberation of the Auschwitz death camp. In addition, there was a political trap awaiting the President of Ukraine. Volodymyr Zelensky however not only did not fall into the trap, but thanks to a creative decision also brought Ukraine to the center of Israel’s public attention.

On one hand, the World Holocaust Remembrance Forum 2020 was extremely important to the reputation and image of the State of Israel as a “collective Jew” who emerged from the ashes of destruction and transformed into a strong and prosperous national home for the Jewish people.

The arrival of four dozen presidents and kings on 23 January 2020 signaled that the preservation of the memory of the Holocaust tragedy, in which sixty-five percent of Europe’s Jews perished, is a worldwide task.

It was important for Israeli President Reuven Rivlin and Prime Minister Benjamin Netanyahu to unite world leaders on the base of the Holocaust in order to create a united global front against Iran, a country which, like the Third Reich eighty years ago, has declared its desire to destroy Jews and their state.

On the other hand, this World Forum did not initially imply equality among the guests. Unfortunately, political games have left their mark on the commemoration of Holocaust memory as well. Russian chemical magnate Vyacheslav Kantor, the initiator and one of the main sponsors of this forum, did everything to make Russian President Vladimir Putin the main speaker. U.S. Vice President Michael Pence, Prince Charles, as well as the Presidents of France, Germany, and Israel were seen as an “addition” to the “Chief Guest.” The other dozens of heads of state had to mourn silently without being able to speak.

Ukrainian President Zelensky faced a dilemma. Declining to attend the forum would mean offending not only Israel and the leading world powers, but also the memory of the one and a half million Jews of Ukraine who died during the Holocaust. But to go and sit in silence while listening to Putin’s speech would be a losing option within Ukrainian politics.

Arriving in Israel late on the evening of 22 January, Zelensky saw in the headlines of Israeli newspapers criticism of the organizers of the forum, who gave only five percent of the seats in the hall to Holocaust survivors. Early in the morning of 23 January, the Israeli media intensified their criticism. They raised the issue of why were there so many seats for presidents and kings in the hall while very few places were allocated for those who were actually saved in the Holocaust and for whom the event was intended.

At that moment, on the morning of 23 January, Zelensky made a brilliant gesture in terms of public relations and public morality. He declared that he would give up his seat and those of the delegation of Ukraine to elderly survivors of the Holocaust. In one stroke, his noble act eliminated the need to listen to Putin’s speech.

Leading Israeli media outlets immediately reported on Zelensky’s unusual move, commenting with sympathy for the young president. At the same time, Ukraine suddenly stood out among the dozens of other countries participating in the forum.

Instead of attending the Forum, President Zelensky went to pray at the Wailing Wall with Kyivan Rabbi Moshe Azman, who blessed the President and the people of Ukraine for peace and prosperity. It was fascinating to watch the president’s personal bodyguard very carefully scrutinize the actions of the rabbi when he raised his hands over Zelensky’s head for blessing.

Zelensky did not have his yarmulke, so he took the simplest and cheapest white yarmulke, intended for tourists on the square in front of the Wailing Wall. 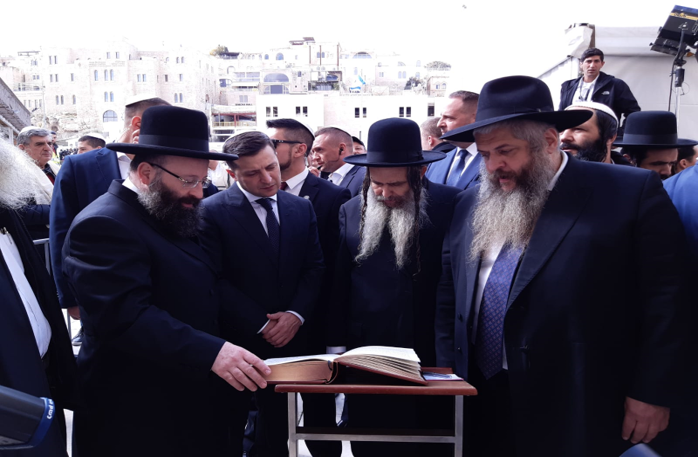 It is interesting that immediately after Zelensky’s decision to give up his place in the forum, the Russian and Ukrainian opposition press quoted unnamed “sources in Yad Vashem” which allegedly criticized the President of Ukraine. In reality, nothing like this happened because  President Zelensky agreed to visit the museum complex the next day.

On Friday January 24 Zelensky and his wife examined in detail the exhibits of the Holocaust Museum and placed flowers in The Valley of the Communities next to a stone with the inscription “Babyn Yar.” Israeli Ambassador to Ukraine Joel Lyon showed the presidential couple the inscription “Krivoy Rog” on a commemorative wall. 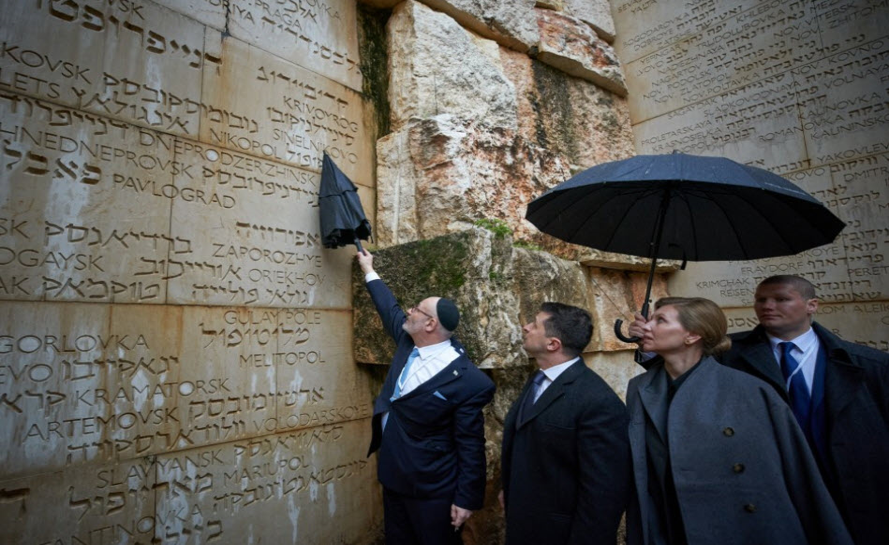 On the same Friday, Zelensky met with Rivlin and Netanyahu.

At the meeting with the Prime Minister of Israel, there were two points of discussion—one remarkable but the other problematic. The story of Zelensky’s relatives was remarkable: three of his grandfather’s brothers were killed in the Holocaust, and his grandfather fought at the front in the Red Army.

However, in citing examples of people who rescued Jews from genocide, Zelensky briefed Netanyahu about Crimean Tatar Sayide Arifova and the Greek-Catholic priest Omelyan Kovch from Western Ukraine. The problem is that both of them are not recognized as “Righteous Among the Nations” in Israel’s Yad Vashem.

The fact is that Sayide Arifova’s rescue story of more than eighty Jewish children does not have documentary evidence. Omelyan Kovch did not receive recognition from Yad Vashem because from the Israeli Institute’s point of view his purpose as a missionary priest was the mass baptism of Jews, which he practiced in the name of saving Jews during the Holocaust.

Zelensky could have briefed the Israeli PM on any of the stories of the more than 2,600 Righteous Among the Nations from the territory of Ukraine that are recognized by Yad Vashem. Instead, the President of Ukraine mentioned two people who have provoked serious questions from historians. 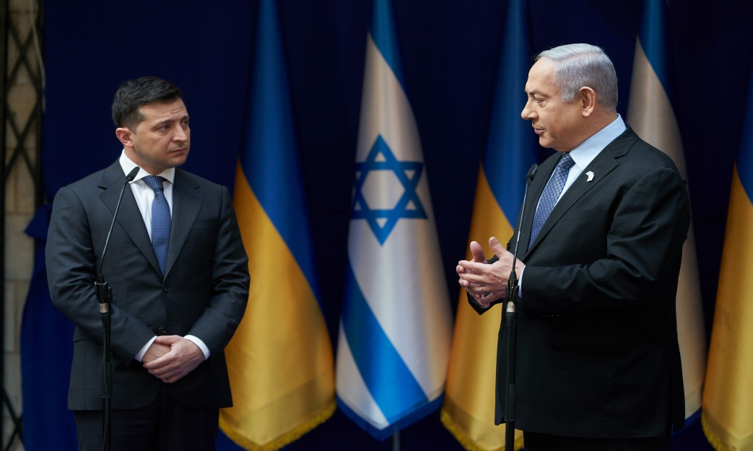 After a private meeting with Netanyahu behind closed doors, Zelensky also met with Israeli business representatives on 24 January. The two-day working visit of the President of Ukraine to Israel turned out to be quite intense.

Zelensky showed more attention to the Holocaust and to those who survived it than many other presidents, who silently attended the official forum. Standing out clearly against the backdrop of dozens of other leaders, he left a positive mark on Israel’s public consciousness.

Text and photo near the Wailing Wall: Shimon Briman (Israel)
Other photos: official site of the President of Ukraine.
Edited by Peter Bejger.