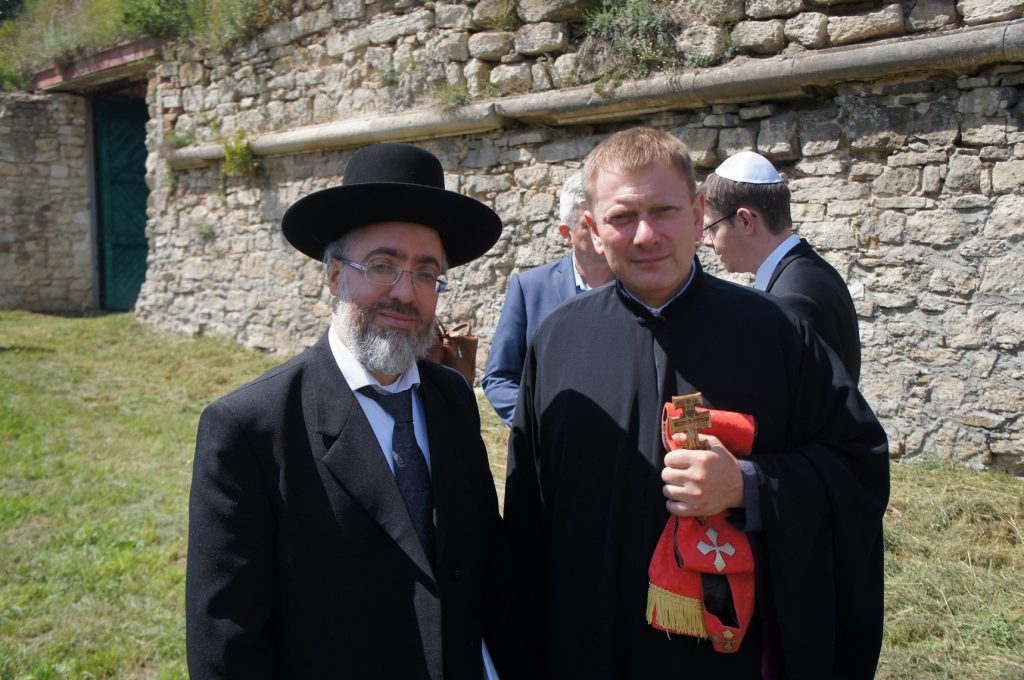 Events took place at the Great Palace of Zolochiv Castle on July 3, 2018 in memory of the Jews who were killed in a pogrom 77 years ago.

Among the participants and speakers were Mayor Ihor Hrynkiv, director of the Economic Lyceum Andriy Zabrotsky, director of Zolochiv’s castle Victor Mykulyshyn and musicians of the Zolochiv Music School.

Dr. Nicolas Dreyer (Germany), along with historian and journalist Shimon Briman (Israel), presented the first Ukrainian edition of the Holocaust in Zolochiv, a brochure published in Lviv based on Shlomo Mayer’s book Death of Zloczow (1947).

The preface was written by Holocaust survivor and Nobel laureate Prof. Roald Hoffmann of the United States.

According to 1941 estimates and postwar witnesses, between 3,000-3,500 Jews from Zolochiv were killed in a pogrom on July 3-5, 1941. Many were shot near the walls of the castle, while others were killed in various places throughout the city and on the way to the castle. Of the 9,000 Jews who comprised Zolochiv’s community, only 90 people survived the Holocaust.

Zolochiv’s pogrom still forces historians to discuss poignant and unpleasant questions about collaboration and the degree of complicity on the part of the local population in the Nazi genocide against their Jewish neighbors.

Recalling the heroism of the best representatives of the Ukrainian people, Ihor and Lyuba Dyuk from the village of Univ recalled their parents, Mykola and Maria Dyuk, who saved a Jewish family from Zolochiv during the Nazi occupation. Among those rescued by the Ukrainian Dyuk family was the future Nobel laureate, Prof. Hoffmann.

Mykola and Maria Dyuk have been named Righteous Among the Nations, an honor bestowed by the State of Israel to describe non-Jews who risked their lives during the Holocaust to save Jews from extermination by the Nazis.

In a ceremony that was the first of its kind held in 77 years, the military chaplain and dean of the Zolochiv Ukrainian Greek Catholic Church Mykhaylo Sukmanovsky, Protestant pastor Vasyl Bobko from the Lviv church “Bozhiy Pokrov” and the chief rabbi of Lviv Mordechai-Shlomo Bald, read memorial prayers at the mass grave of the city’s perished Jews near the outer wall of the castle.

Religious leaders, together with the city’s mayor, talked about the need to remember the tragedies of the past, the desire for reconciliation for the future and cooperation between the Ukrainian and Jewish peoples.

Mykhaylo Sukmanovsky said his grandfather in the village of Torhiv near Zolochiv saved two Jewish girls during World War II. They left for Canada after 1945.

At the end of the memorial event, the participants carried a matzeva, a Jewish tombstone, which had been found in a private garden, to a monument at the Jewish Cemetery.

The memorial event in Zolochiv and the Ukrainian edition of the brochure about the Holocaust in this Galician city were made possible by donations from private individuals. They included Christians from Germany as well as activists from the Christian organization “Seek the Peace of the City” from Nuremberg.

Zolochiv’s city administration and the leadership of the Zolochiv Castle expressed their strong commitment to continue and expand their activities in memory of the city’s destroyed Jewish community. They said they will try to find sponsors for the four top priority projects of 2019-2020:

For the first time in decades, Zolochiv residents are beginning to realize Holocaust victims were a huge loss for their city and a tragedy for the whole of Ukraine.

“The participants were imbued with a memorial atmosphere, even the castle’s hall aided in this. The main thing is that there were people who worried about it, and they are still worried about it. Now the city and the castle are obliged to establish a memorial sign at the place of the mass grave,” said the director of the Economic Lyceum Andriy Zabrotsky, who was also a participant of Ukraine-Israel Conference on Education, which was supported by the Ukrainian Jewish Encounter in April 2018.

“Innocent people must be remembered, the present generation must be aware of these terrible events. I know about the ideas and projects that are being developed in 2019 in order to immortalize the memory of the victims at the time of the Holocaust in Zolochiv. Unconditionally and completely I support them, ” said Ihor Muryn, a local activist and advisor to Zolochiv’s mayor.

The violinist Pavel Darmytz at the mass gravesite

Author of text, photos and video: Shimon Briman.
Edited by: Natalia A. Feduschak