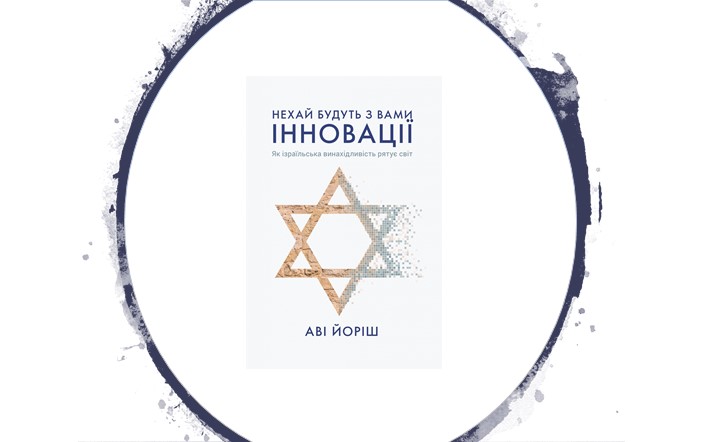 Iryna Slavinska:  Today’s program is devoted to an unusual topic. We will be talking about Israel and innovations. Our focus is Avi Jorisch’s book Thou Shalt Innovate, subtitled How Israeli Ingenuity Repairs the World, issued [in Ukraine] by Yakaboo Publishing. The publisher Iryna Forostyna is in our studio. Hello!

Iryna Slavinska:  First, I have to acquaint our listeners a bit with the introduction to the book. It is incredibly moving, and from it we learn that this is the book that was started under the conditions of combat operations.

Oksana Forostyna:  Yes. Here I must say that the author, Avi Jorisch, is not only an Israeli but an American as well; he spent his childhood in the U.S. At the age of seven he moved to Israel, then returned to America for his studies. Eventually, he went back and lived in Egypt as well. That’s why the enthusiasm of a neophyte is still present in him. He recounts how in adulthood he lived in Israel with his family, and during the bombardment he hid in a shelter with his child. This is an occasion for him to reflect on Israel’s air defense system. Thus, thread by thread he, a neophyte, begins to uncover these stories and examine them both as a resident of Israel and a newcomer.

Iryna Slavinska:  Like a pioneer. As far as I understand, this is a good opportunity for the author himself to grasp what Israel is and what it can offer the world, correct??

Oksana Forostyna:  He has preserved distance, and I think that the fact that he lived not just in Israel gives him a global perspective. In other words, in each invention that he studied, he tries to perceive its global impact. And he sees how these inventions and innovations are helping people thousands of kilometers from Israel.

Iryna Slavinska:  Let’s acquaint our listeners with the inventions and heroes that are encountered in this book. Of course, I won’t recapitulate the entire book, but maybe we can shed some light on the stories that affected at least Oksana Forostyna as a reader.

Oksana Forostyna:  I was most moved by the story about birds; about an ornithologist—we would call him a nerd in our country—who disappointed his Jewish mother, who really wanted him to be a doctor or lawyer. At play here, too, is the specific feature of the English language, because those who observe birds have an additional image of an impractical person detached from the world. This is a person who does something as unprofitable and unpractical as possible. It borders on laziness. And there is a story in it about how, thanks to his knowledge and profession, he saved many lives and over a billion dollars. Because a phenomenal number of birds heading to their winter quarters fly through the territory of Israel. Birds have caused more damage to planes, especially military ones, than enemy armies. More people have died, not in battle but because birds hit planes. And this is a story about how a person, whose head is supposedly in the clouds, encounters this military industry and how he develops this fantastic project for monitoring flocks of birds, and thus protects aircraft. The scale of this story appeals to me a lot.

Iryna Slavinska:  What does he do? Corrects the trajectory of the planes?

Iryna Slavinska:  A very clever and not so obvious idea. Could anyone not working in this field have imagined that there might be a connection between airplanes and birds, apart from the metaphor of the “iron bird”?

When I was reading this book, I was also struck by the fact that it also talks about Arabs who live in Israel; at the very least, about an IT couple that developed something very useful.

Oksana Forostyna:  Yes, I recall several topics, and there definitely was a story about the Israeli bandage.

Iryna Slavinska:  This is something for which at one time we donated money for the Ukrainian front.

Oksana Forostyna:  The sewing was done by Arabs who live in Israel. The author describes this very complex context; how they develop from purely business relations to practically familial ones.

Iryna Slavinska:  To what extent is the interethnic context present in Avi Jorisch’s book Thou Shalt Innovate? The book is subtitled How Israeli Ingenuity Repairs the World, but Israel, together with all contexts, is a big country, where various religious and national identities have to interact with each other.

Oksana Forostyna:  Yes. But I think that what is also important for Avi Jorisch is the religious and worldview aspect. In this sense, inclusivity emerges from the stories and subjects, but the general fabric of the account has a worldview theme. He links each topic to a quotation from the Old Testament, the Torah, or some religious thinker. In this sense, the book differs from Start-up Nation, although the latter was an inspiration for Avi Jorisch to some degree.

Iryna Slavinska:  He mentions it in the introduction as a book that was devoted to Israel, an “innovative country.”

Oksana Forostyna:  Start-up Nation is a book about economic history, and it deals more with Israel’s secular history. Avi Jorisch tries to dig down to the very worldview essence and roots. What moves people when they take up impossible goals and overwhelming challenges? I think that this will not be unpleasant to hear, but he sees this precisely in religion and world perception. I think that there are a lot of nuances there that are inclusive in the sphere of religion because there are various branches of Judaism. And he cites these different branches there.

Iryna Slavinska:  What is the book’s central message? How can innovations be linked with religion?

Oksana Forostyna:  There is a phrase in this book that appealed to me most of all. It is not one of Avi Jorisch’s, it’s a quotation: “The world stands upon three things—upon Torah, upon divine service, and upon acts of kindness.” One can say that the Torah is books and education. He decodes this in the book. As is generally known, Jews are also called the “people of the Book.” When we speak about the Book, we have the Torah specifically in mind. And he actually says that this is a striving to do good deeds and “repair” the world.

When we were doing the translation, we didn’t use this word too much. But “repair” is truly apt. The translator, Zoryna Timmerman, insisted that we use this word more often. There is some messianism to it, but I think that it’s a good messianism. To make the world a better place as a necessity that is implanted with upbringing, and is not part of pragmatic calculations, even though there is a rather honest explanation there, too. The great assistance that Israel gave to African countries at one time was connected with the embargo and international isolation experienced by Israel. So, in order to escape isolation, this state did much for impoverished countries, even at a time when it, too, was still very poor.

Iryna Slavinska:  If we’re talking right now about relations with other countries, can one see in this book, Thou Shalt Innovate, some kind of connection with Ukraine or the countries of the former USSR? After all, aliyah from these countries is very significant. And judging purely by statistics, one can assume that there are people of Ukrainian background among [Israeli] inventors.

Oksana Forostyna:  Avi Jorisch himself has ancestors from Chernivtsi. He concentrates more on the impact of inventors and on how they disperse throughout the world in waves. We already mentioned the Israeli bandage, which we needed five years ago. The book contains stories about inventors and mentions of parents who come from Eastern Europe are very typical for Israel.

Iryna Slavinska:  In Israel I first heard the thesis about the “golden million,” people who emigrated from Ukraine, Russia, and Belarus, comprise a significant part of Israel, and who have turned out to be a very productive part of this society.

Oksana Forostyna:  This is discussed in Start-up Nation. The innovation boom is connected with the fact that in the 1980s and 1990s new emigrants were arriving from the USSR with technical specialties. This coincided very aptly with the development of technologies.

Iryna Slavinska:  And, of course, the book’s [Ukrainian] title has a very intriguing reference to Star Wars: May Innovations Be with You. As a reader, I was instantly reminded of the phrase, “May the force be with you.” Is that just my impression or is it really present? Is this a translator’s joke?

Oksana Forostyna:   No, in the original it sounds like an allusion to the language of the Old Testament.

Iryna Slavinska:  If we’re talking about the translation in Ukraine of books relating to Jews and Israel, these books are historical or are devoted to other humanist contexts, and they concern new things that are happening in this state. According to your observations, to what extent are these books relevant to our audience?

Oksana Forostyna:  This book came out in our country before the Book Arsenal, and it became one of our Top-5 most popular books. I connect this with the fact that Israel is a country that appeals to Ukraine in a certain way. First of all, it’s closer than a country, say, in Latin America. The context is much closer for us. Secondly, there is a certain saturation that has emerged in the last five or six years.

Iryna Slavinska:  The possibility of recognizing “our Other” where Israeli experience is concerned—is this about family histories and the fact that many of us have relatives, neighbors, and friends there? Is there something else?

Oksana Forostyna:  On the everyday level, this are friends and relatives, especially among the older generation, which remembers how people were immigrating. And it is impossible that people live next to each other and certain markers disappear. It is all still with us. We are still very close on the everyday level. In terms of context and intonation, the language is close.

Iryna Slavinska:  Can Ukraine be seen as an innovative country?

Oksana Forostyna:  Not yet. The numbers show that we haven’t caught up to Israel yet. Although it’s quite possible that we don’t know everything. As far as I know, we don’t have collated information, for example, about all the scientists who are involved in large international projects.

Iryna Slavinska:  In other words, this means that people find out about start-ups that have become super-successful, like Pet Cube or Grammarly, only once everyone is writing about them.

Oksana Forostyna:  Yes. When we talk about start-ups, there are specialized media that monitor these things. But scientists are not as visible to society as start-ups.

Iryna Slavinska:  If we’re talking about myth creation, how realistic is it to create, inside and outside, a myth about Ukraine as an innovative country? Is our country more about archaism and conservatism at the moment?

Oksana Forostyna:  I would not say that it’s about tradition or archaism. The hunger for such a myth exists. The fact that it is not filled with content is something else altogether. But the need is already there.

Iryna Slavinska:  Where does this hunger come from?

Oksana Forostyna:  I think that Ukraine has its own traumatic, tattered, but very interesting history of modernization. And this is an incomplete history. It is coming back to us reinterpreted. For example, the interest in the architecture of modernism and Constructivism. The visual is grasped better than complex narratives about scientists. A tattered history will somehow be picked up.