The Ukrainian Jewish Encounter sponsored a lively panel discussion entitled "Taras Shevchenko: Ukrainian Nationalism, Poetry and the Jews" at the YIVO Institute for Jewish Research in New York on September 30, 2014.

Chaired by Gennady Estraikh, Associate Professor of Yiddish Studies at New York University and currently Visiting Scholar in East European Jewish Literature at YIVO, the panel brought together Ukrainian and Jewish scholars in an enlightening discussion that provoked a spirited participation during the question and answer period from the nearly one hundred people in attendance. 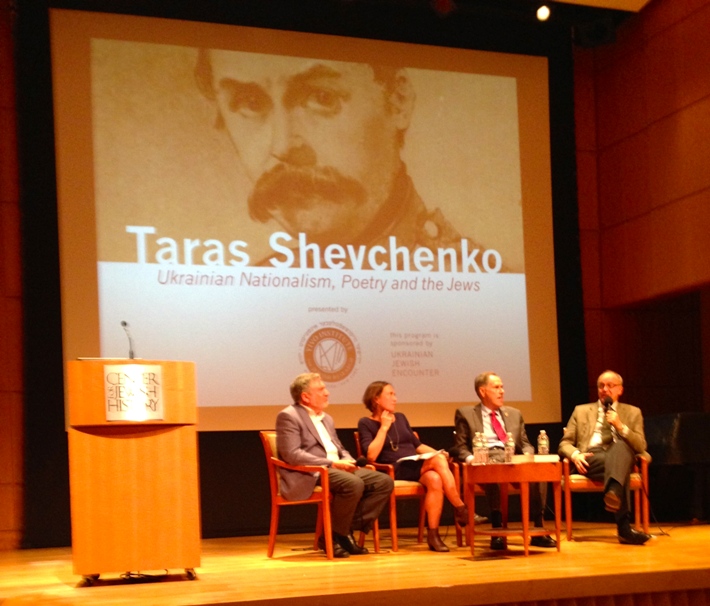 Peter Fedynsky, the translator of the first complete English edition of Shevchenko's Kobzar, a foundational text of Ukrainian literature, began with an illustrated overview presentation on the life and works of Shevchenko. Fedynsky’s recently published translation provided the occasion and inspiration for organizing the panel at YIVO.

Amelia Glazer, Associate Professor of Russian and Comparative Literature at the University of California, San Diego and author of Jews and Ukrainians in Russia's Literary Borderlands, spoke in detail about Yiddish translations of Shevchenko's works, in particular those of Dovid Hofshteyn, a leading modernist Yiddish poet of the 1920s and 1930s, which were directed at a Soviet Yiddish readership. Though regarded as a "good Soviet poet", Hofshteyn was imprisoned for “anti-Soviet activities” in 1948 and executed along with other Jewish writers in 1952. Professor Glazer emphasized the striking aesthetic kinship between Shevchenko and Hofshteyn, as both were masters of wordplay and innovators with rhythm. She also discussed how Soviet Jewish translators and Shevchenko scholars had integrated Shevchenko's work into the Soviet "literary friendship of nations" project.

Myroslav Shkandrij, Professor of Slavic Studies at the University of Manitoba and author of Jews in Ukrainian Literature, stressed the need to see Shevchenko in his entirety rather than in discrete selections or voices. He acknowledged that it is possible to see antisemitic elements in Shevchenko's poem The Haidamaks, but that a careful reading shows a more complex picture, with the presence of different voices that give expression to both stereotypical and empathetic depictions of Jews. Professor Shkandrij considered that in other works Shevchenko placed greater emphasis on the spirit of forgiveness as opposed to vengeance and bloodshed, and showed a deep appreciation of the intimacy and complexity of Ukrainian-Jewish relations, of the shared history of suffering and oppression, of being both victims and accomplices. Professor Estraikh noted that Jewish writers have not accused Shevchenko of antisemitism.

With excellent presentations that complemented each other very well, the panel’s exploration of aspects of Ukrainian-Jewish relations was an invaluable contribution to the festivities marking the bicentennial of the Ukrainian poet’s birth.

An audio file of the event is available here