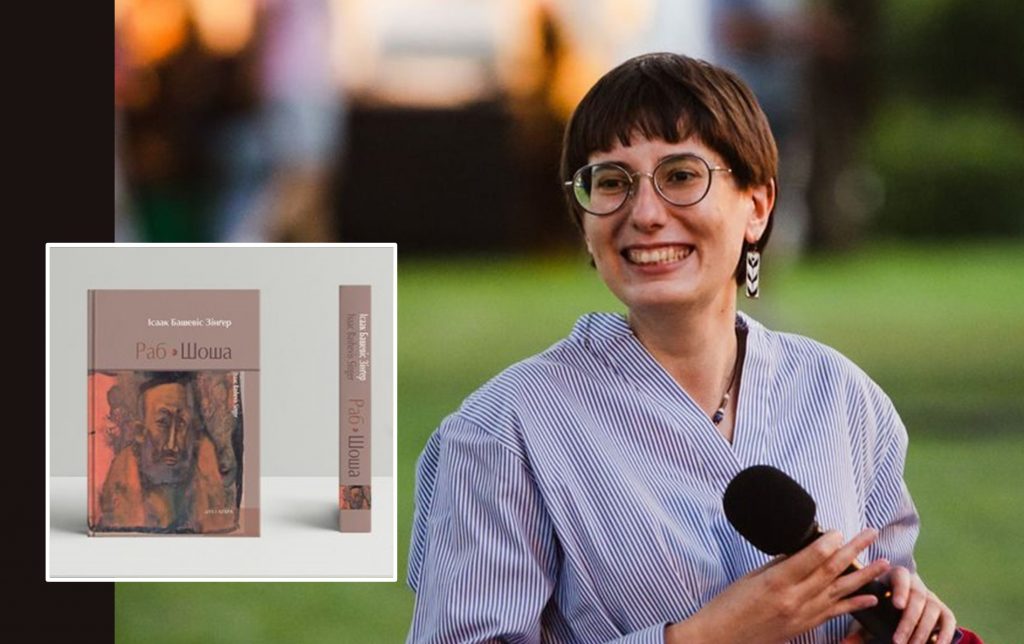 We are discussing the much-awaited [Ukrainian-language] publication of the texts Shosha and The Slave, by Isaac Bashevis Singer, winner of the Nobel Prize in Literature.

More details about these texts will be provided by the translator Yaroslava Strikha.

Yaroslava Strikha: Isaac Bashevis Singer won the Nobel Prize in 1978. He is the only Nobel laureate who wrote in Yiddish. It is the language of mostly Eastern European Jews, and it is now practically on the verge of dying out. Singer is one of the greatest masters of Yiddish literature to those who stand outside this culture. He was a very controversial figure for his fellow writers. I think that this is a very interesting phenomenon: How a person from a minority culture tries to adapt to the demands of surrounding cultures. He insisted that his books be translated, not from the Yiddish original, but from an adapted English-language version.

Iryna Slavinska: A writer who insists that he not be translated from his native language—that doesn’t happen very often.

Yaroslava Strikha: Without a doubt, this is a rare phenomenon. Initially, he wrote his novels in Yiddish for a daily newspaper at a furious pace: six pages per hour. He would bring this late at night to the editorial offices and throw it down on the doorstep. He recounted later that even after so many years he could recall how furiously he wrote. Due to this inhuman pace, there were repetitions of some motifs. In some places, it was possible to expand descriptions; elsewhere, develop a dialogue. He often turned a manuscript into a final book during the translation process, not for the Yiddish-language publication itself.

Singer said that in his youth he dreamed of a harem of women, and now he dreams of a harem of female translators. His official female biographer states that each of his female English translators told her in confidence that he had embarked on romantic relations with all of his female translators, except her. His female translators often did not know Yiddish. He would dictate the general contents to them, and they would provide a literary edit. He often smoothed out discordant moments. This was partly a deliberate construction of different images for various audiences, and partly the product of his complex relationship with tradition and language.

Singer comes from a Hasidic family; this is a mystical current of Judaism, which shuns modernity. He chooses a secular path, not a religious one. He has a complicated relationship with Yiddish. After the war, it became clear that the majority of the audience had been killed, and the audience that was in the U.S. or South America was assimilating.

He recounted that writing in Yiddish meant being unheard, invisible; being a specter. He said that this literature would never again leave the bounds of the ghetto. As soon as he enters the English-language market, he begins to talk about the literary advantages of writing in this not-very-formed language; about the fact that those who write in Yiddish have significantly greater possibilities. He also considered Hebrew a dead language—and nothing.

Iryna Slavinska: What countries, what territories are we talking about?

Yaroslava Strikha: He was born in Warsaw and spent part of his childhood in small Polish towns. In 1935 he immigrated to New York, where he lived for the rest of his life. After the Holocaust, he returned to Europe ten times, one of those times to receive the Nobel Prize. His mother and younger brother survived the Holocaust, but later, for religious reasons, they ended up in Soviet camps, where they perished.

Iryna Slavinska: What can you say about the texts that will be published this fall?

Yaroslava Strikha: One of them deals with the more distant past, the seventeenth century. The other deals with the present, with the same dilemmas that the author encountered as a writer who wants to write in Yiddish, as a person at the crossroads between modernization and openness to various cultures, and loyalty to his tradition.

The novel Shosha was written in 1974. It never came out as a separate book in Yiddish; only journal publications exist. The action of the novel unfolds in Warsaw in the 1930s. The main hero is a writer, in whom we recognize Singer himself.

On the one hand, the novel portrays practically the medieval world from which he had come and which guards its borders and its learning very closely. On the other hand, you have all the temptations of modernism. He goes to a neighboring street to the Union of Yiddish Writers. He becomes acquainted with an actress who performs in Yiddish and has come from New York to find a director and writer of the play that will make her into a star. He is given carte blanche; he can write the most modern play, but something stops him.

Instead of choosing this story of success, essentially, he chooses his female childhood friend; a little girl with some developmental defects who safeguards this entire ancient world, everything that is disappearing into the past. This is a metaphor of the writer, who had an ambiguous attitude to Yiddish: to help keep alive that which no longer exists, however imperfect it may be. After all, it is still interesting, and you are made up of this whole story.

Iryna Slavinska: Is this a statement about tradition being better?

Yaroslava Strikha: This is a statement about modernity not being the only path; that modernity can coexist alongside tradition. Singer is a modernist writer in his aesthetics, in his choice of themes, in his emphasis on aesthetics, not the commemorative dimension of literature. His colleagues viewed the awarding of the Nobel Prize to Singer as a slap in the face because a poet who writes in Yiddish is a poet who is writing for dead people.

Iryna Slavinska: The historical novel The Slave will be interesting to discuss. Many readers can discover the fact that in Jewish memory the exploits and valor of Bohdan Khmelnytsky are not quite straightforward.

Yaroslava Strikha: Readers should take into consideration that figures who left a large mark on history within the confines of various traditions will be perceived in a variety of ways. Khmelnytsky is a vivid example.

The action of The Slave takes place a few years after the Khmelnytsky uprising. The main hero, Yakov, is sold into virtual slavery to peasants in the Polish part of the Carpathians, and his family was massacred during the pogroms that took place during the Khmelnytsky period. He falls in love with his owner’s daughter. He does not know if his first wife is alive. There is an additional obstacle: His new beloved cannot convert to Judaism.

I think that this is a story about an impossible love, with all the obstacles you can think of standing in its way. This novel was written after the Holocaust. Singer tries to understand in this work how one can justify God if He allows so much bloodshed. In this situation, how can one continue to believe?