"The Anti-Imperial Choice: The Making of the Ukrainian Jew" wins the 2021 'Encounter' prize 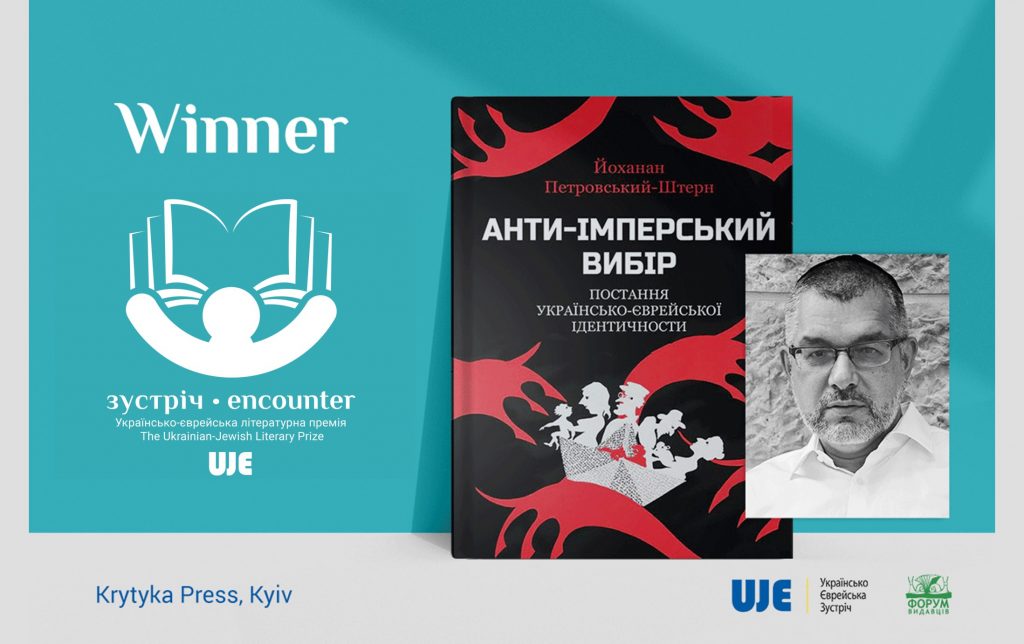 Ukrainian Jewish Encounter (UJE), a Canadian charitable non-profit organization, and Ukraine's NGO "Publishers Forum" (Lviv, Ukraine) are pleased to announce that the Ukrainian-language translation of The Anti-Imperial Choice: The Making of the Ukrainian Jew by Yohanan Petrovsky-Shtern, published by Krytyka Press in 2018, is the second winner of "Encounter: The Ukrainian-Jewish Literary Prize" ™.

Petrovsky-Shtern was named winner during the opening ceremony of the 28th Lviv International BookForum on 15 September 2021.

The book explores the Jewish contribution to and integration with Ukrainian culture through five writers and poets of Jewish descent whose literary activities span the 1880s to the 1990s. Unlike their East European contemporaries who disparaged the culture of Ukraine as second-rate, stateless, and colonial, these individuals embraced the Russian- and Soviet-dominated Ukrainian community, incorporating their Jewish concerns in their Ukrainian-language writings.

"We were extremely impressed with the quality of books submitted for the 'Encounter' prize from Ukrainian publishers, large and small, in the non-fiction category," said Natalia A. Feduschak, UJE's communications director. "The works reflect a wide array of subjects that explore the Ukrainian-Jewish experience. As comments from the jury members show, the submitted works are an important contribution to the understanding of Ukraine as a multiethnic state, and the relationship between Ukrainians and Jews in particular."

Petrovsky-Shtern is a historian, literary critic, philologist, essayist, translator, and artist. He is Professor of Jewish History at Northwestern University; a Corresponding Member of the Ukrainian Research Institute at Harvard University (2010); an Honorary Doctor of NaUKMA (2013); and Professor at the Ukrainian Free University in Munich. He has authored more than a hundred articles and several books, including the award-winning tome The Golden Age Shtetl: A New History of Jewish Life in East Europe.

Members of the international jury commented on the books submitted for the 2021 'Encounter' prize:

Mykola Riabchuk (Ukraine, Jury Head)
Frankly, I was impressed by the number of high-quality books submitted to the UJE award competition. The downside of my excitement was, however, some bitterness, since І was not just a reader but also a jury member assigned to select both the finalists and the winner. We had really to agonize with colleagues as the selection of the best of the best was an extremely challenging and painstaking process. Five books were chosen — to our common delight — and five equally excellent, were abandoned — to our common regret.

Two of the five books that were ultimately shortlisted are memoirs, and three books represent scholarly works. It is a problem not only to juxtapose these two kinds of non-fiction, but also to compare the books within the same genre. Soma Morgenstern, a "Jewish-Ukrainian writer and journalist," as the English version of Wikipedia defines him, published most of his work in German, the language of his university education (in Vienna) and of the interwar literary activity — before his life-saving emigration to the U.S. His memoirs were published posthumously, uncompleted, and are focused primarily on his adolescent years in Podilia, where he attended the Ukrainian school initially at the beginning of the 20th century. Shlomo Adler recollects a much more traumatic experience of the Holocaust survivor who eventually emigrated to Israel. What they have in common, however, is a vivid, detailed and complex description of Jewish-Ukrainian relations in Western Ukraine that included both confrontation and cooperation and should neither be demonized nor idealized. They were primarily interpersonal rather than interethnic; they were driven by personal attitudes and were determined, in each case, by personal choice and moral responsibility.

The scholarly books include a pioneering study of the history of Jewish theater in Ukraine by Iryna Meleshkina that regretfully omits the West Ukrainian developments but provides a detailed, well-documented and illustrated story of Yiddish theater in the Russian/Soviet part of Ukraine — from its early traditional roots and the 19th-century institutionalization — to the brief 20th-century boom in the 1920s and dramatic decline under the repressive antisemitic policies of Stalinism.

Another impressive work is Yuri Skira's diligent study of the policies and activity of the Greek-Catholic Church and, in particular, the monks of the Studite Order during the Holocaust. Even though the book does not pursue any apparent political agenda — as it actually should be in scholarship — it lays the ground for the ultimate recognition of the prominent role that the Church and its hierarchs, Metropolitan Andrey Sheptytsky in particular, played in rescuing Jews during the war.

The third scholarly monograph that entered the shortlist was Yohanan Petrovsky-Shtern's scrutiny of life and work of five Jewish writers who made a rather unusual choice: they opted for the Ukrainian language and Ukrainian cultural identity against the dominant Russian. The author rightly defines that choice as "anti-imperial." It was really unusual and really courageous — like the "dancing with wolves," taking the side of the weaker, despised and oppressed against the stronger, dominant, and prestigious. These rare cases, however exceptional, prefigured today's developments that got a boost since Ukraine's independence and accelerated dramatically since Russia's 2014 military invasion.

All the ethnic minorities who lived in Ukraine for centuries had been rather reluctant, for obvious reasons, to take the Ukrainian side and preferred typically to sit on the fence during Ukraine's national liberation struggles. It seems the years of mutual mistrust and alienation are passing away. It is not only minorities who recognize Ukraine as their primary homeland and subject of political loyalty; it is also Ukrainians who recognize — not only rationally but also emotionally — that there are "our" Jews, "our" Russians, and "our" Tatars insofar as all of them, regardless of ethnicity, are politically Ukrainian.

All the shortlisted (as well as longlisted) books contribute to these new feelings and new understanding of what it means to be a Ukrainian and how to define the Ukrainian multiethnic and multicultural nation in the modern world.

Liliana Hentosh (Ukraine, Jury Member)
I saw my participation in the jury as a very responsible job. In general, choosing one book as the best of ten quality and interesting longlisted books, including memoirs, manuals, a guide and scientific monographs, was a difficult task. According to the joint and unanimous decision of the jury, the winner was the book The Anti-Imperial Choice: The Making of the Ukrainian Jew, authored by Yohanan Petrovsky-Stern. Prof. Petrovsky-Stern's monograph demonstrates a very high quality of scientific research. The author explores a phenomenon that was not widespread, but rather marginal, and before the appearance of his work was not articulated in the scientific space as a separate important problem. Through an analysis of the life and work of five writers of Jewish descent who wrote in Ukrainian, the author shows how such a choice influenced their own identity and challenged the dominant imperial discourse. This book deserves distinction because it reveals a very important page of Ukrainian-Jewish common history, especially in such an important area as literature. He also demonstrates on the example of the life and work of five creative personalities how important the two cultures, the two peoples, were for each other and how important Ukrainian-Jewish understanding is for building our future. Because in such a broad and globalized world, only mutual understanding and mutual respect of our differences will help understand the other as different, but not as a stranger. Therefore, in my opinion, the book by Prof. Petrovsky-Shtern, drawing examples from the past, helps us to understand the tasks of the future.

Marko Robert Stech (Canada, Jury Member)
Yohanan Petrovsky-Shtern's book The Anti-Imperial Choice: The Making of the Ukrainian Jew is the first major attempt to study and scientifically substantiate the very complex and subtle process of the origin, formation, and crystallization of a certain type of cultural identity: the Ukrainian Jew. This process is difficult to describe and conceptualize because at almost all stages of its evolution, it emerges, it would seem, from purely individual-specific choices approved by one person: a given creative personality. At the same time, however, these individual choices of certain cultural codes and values are deeply rooted in general historical and social contexts and reflect much broader processes that go far beyond the private life of the creator. Over time, the individual choices of leading creative figures radically affect the collective consciousness of the entire surrounding community. In the multifaceted study of biographies and literary achievements of five Ukrainian writers of Jewish origin, whose personal lives and the development of creative talents took place in different historical contexts of Ukraine, especially in the twentieth century, Yohanan Petrovsky-Shtern was able to very thoughtfully consider these complex — personal, and at the same time collective — dimensions of the processes of formation of the anti-imperial Ukrainian-Jewish identity from several key perspectives and complementary points of view. This monograph, written at the intersection of a number of academic disciplines, lays a solid foundation for future research in this complex and important aspect of the history of Ukrainian culture."

The prize money is divided between the author and publisher: the author will receive 4,000 Euros and the publisher 2,000 Euros. Four (4) incentive awards of 250 Euros each will be awarded to shortlisted authors.

In 2021, 20 Ukrainian publishers submitted 30 books in the competition. The long list featured ten books, five of which ended up on the shortlist.

Along with the Ukrainian-language translation of The Anti-Imperial Choice: The Making of the Ukrainian Jew, the following books were shortlisted:

They Were Called Upon: The Monks of the Studite Order and the Holocaust by Yuri Skira, 2019 (Dukh i Litera, Kyiv)

Wandering Stars in Ukraine: Pages from the History of Jewish Theater by Iryna Meleshkina, 2019 (Dukh i Litera, Kyiv)

Again: From Bolechow to Communist Poland to the Jewish State by Shlomo Adler, 2020 (Kameniar, Lviv)