The fate of a Jewish artist: from Galicia to the USA with love and pain 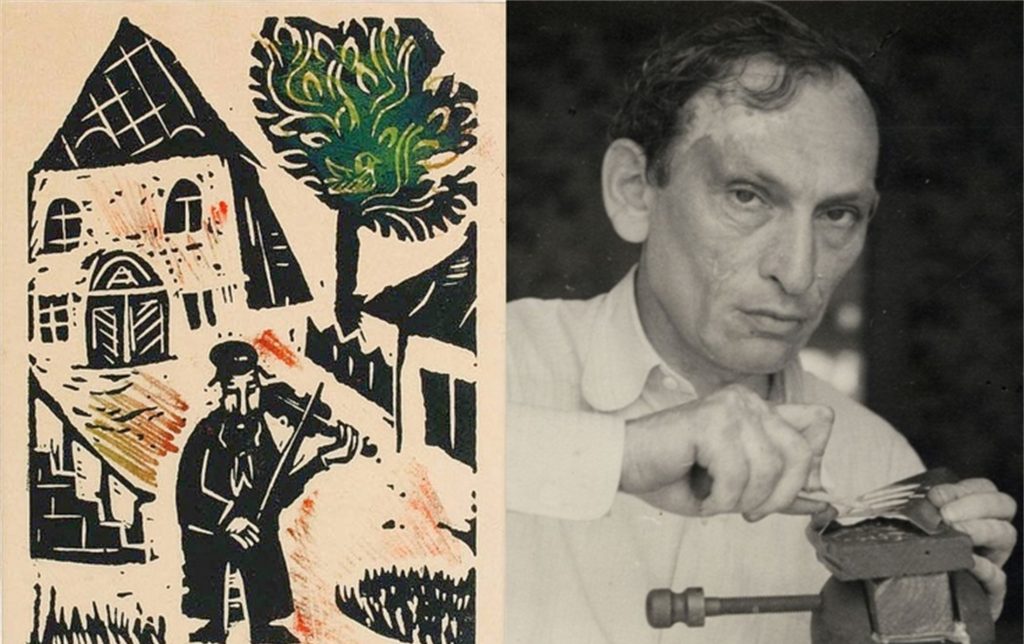 Ilya Schor, a native of Galicia who was a talented painter, jeweller, engraver and book illustrator, became one of the founders and most renowned representative of the "Jewish style" in American art. His works are in the collections of the Metropolitan Museum of Art (New York), the Great Synagogue (Jerusalem), the Australian Museum (Sydney), and in various private museums all over the world.

Ilya (Israel) Schor was born into a religious family in the city of Zolochiv in 1904. His father, Naphtali Schor (1847–1933), was a self-taught folk artist who painted colorful signs for shops in Zolochiv and surrounding towns. The atmosphere of the city's Jewish community was suffused with the Hasidic traditions that were established by the famous mystic and sage Yeḥi'el Mikhl of Zolochiv in the late eighteenth century.

Schor's family lived near the Great Synagogue, and they owned another modest building near a small river and fields. 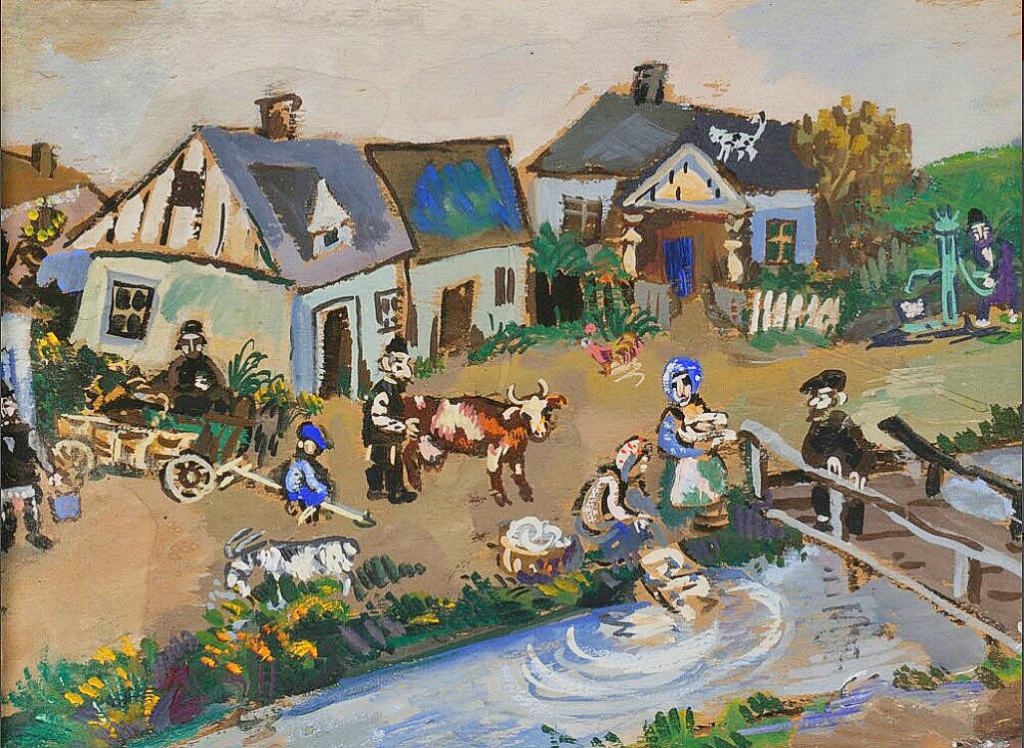 A childhood spent near the Great Synagogue made a huge impact on the future artist; the old synagogue later appeared in many of his paintings. 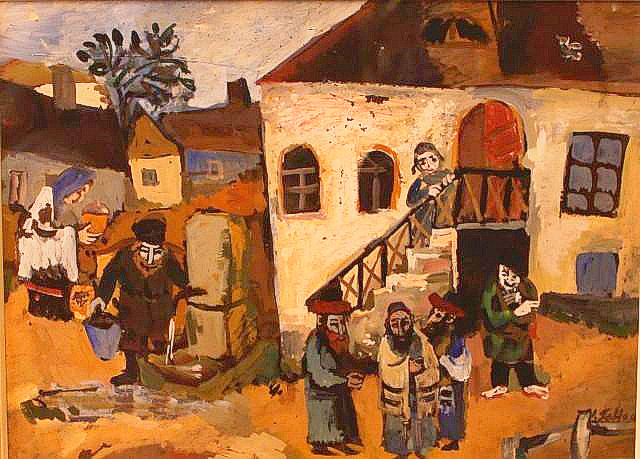 In his early years, Schor mastered his silversmith's skills and worked with other metals, and also studied engraving techniques. In 1930 he enrolled in the Academy of Fine Arts in Warsaw, where he studied painting. While at the Academy, he fell in love with the young artist Resia Ainstein (1910–2006). In 1937, when he received a grant to study in Paris, Ilya and Resia moved to the French capital already as a couple. He had a successful exhibition at the Fall Salon in 1938. 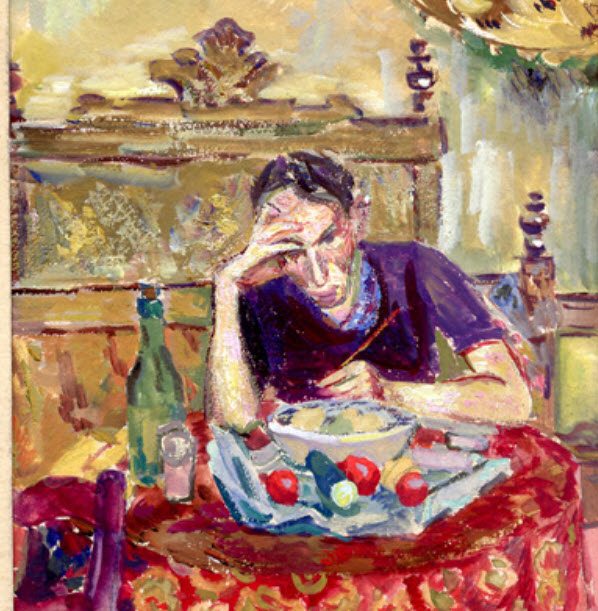 Ilya and Resia married in 1939, on the eve of the Second World War. In May 1940, they fled Paris to Marseille in the hope of leaving France and escaping from Hitler's advancing troops.

In 1940–1941, thousands of Jewish refugees awaiting visas to the U.S. were stranded in Marseille, the largest port city of unoccupied France. However, the American State Department ordered its diplomats to delay issuing entry visas to the States. Thanks only to Harry Bingham, Vice-Consul of the U.S. in Marseille, and the American journalist Varian Fry, more than two thousand Jewish refugees obtained visas to the U.S. and were saved from being killed. Among those who were rescued from Marseille included Marc Chagall, Hannah Arendt, Leon Feuchtwanger, and hundreds of other members of Europe's intellectual and artistic elite.

The painful wait for a visa against the backdrop of escalating Nazi persecutions and the antisemitic laws passed by French collaborators is reflected in Schor's self-portrait, painted in mid-1941 in Marseille.

Ilya and Resia obtained their visas literally at the last minute, thanks to the guarantees made by Schor's brother, Abram, who had emigrated from Zolochiv before Ilya was born and had become a successful restaurateur in Los Angeles. The steamship carrying the young couple crossed the Atlantic and arrived in New York City on 3 December 1941, a few days before Pearl Harbor and Germany's declaration of war against the United States. Nearly all the Jewish refugees who could not make it out of Marseille by that point were killed during the Holocaust, despite having visas to the U.S. 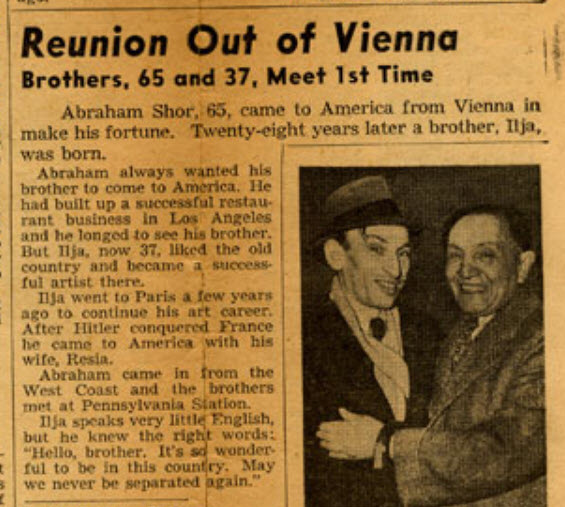 In the U.S., Schor opened a studio in his own apartment in New York, and his wife helped him in his work. After Ilya's premature death in 1961, Resia spent more than forty years working as an artist and jeweller in their studio, continuing her husband's life work. 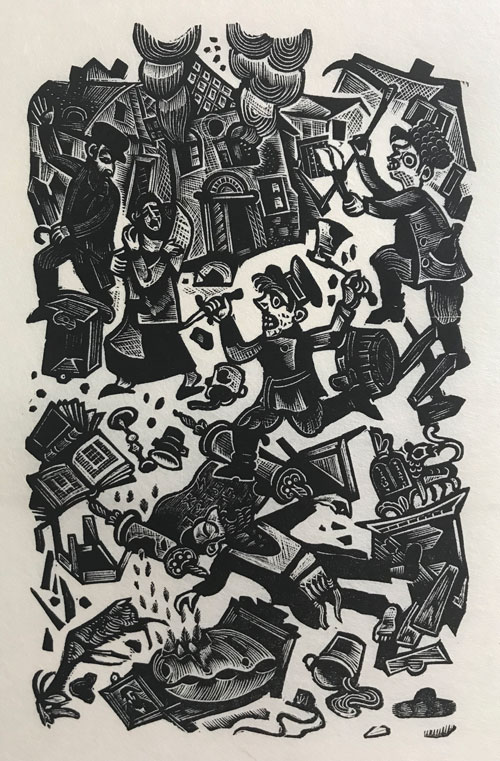 The two decades that Schor spent in the U.S. were a period of creative flourishing. Among his works is a series of illustrations for the books of Sholem Aleichem. The collection about the little boy Motl shows the route Jewish emigrants took from the Ukrainian Kasrylivka to New York. It is interesting that in the scene in which a Jewish pogrom is being explained to Motl, Schor depicts the pogromists wearing Russian clothing dating to the early nineteenth century.

Dr. Sergey Kravtsov of the Center for Jewish Art at the Hebrew University of Jerusalem calls Schor's creativity a search for a "Jewish style" within the framework of expressionism. "It's closer to 'Chagallism,' and if we are speaking about Ukraine—to Yissakhar Ber Ribak," noted the expert for the Ukrainian Jewish Encounter.

Schor's ornaments are rooted in eighteenth-century Jewish decorative motifs, which are evident in the synagogue paintings and on gravestones found in Podillia, Volyn, and Galicia. "I think that these works of Schor's are strongly influenced by the engraver Solomon Yudovin, who took part in ethnographic expeditions throughout the small towns of southwestern Ukraine in 1912–1914, which were led by S. An-ski," says the specialist from Hebrew University.

"Galician-Jewish artists of the time were more apt to run away from the small town than be touched by it. Ilya Schor's nostalgic view is turned away from the post-Holocaust world toward the past," Dr. Kravtsov emphasized.

This is true: With all his paintings, engravings, and Judaic jewelry items, Schor appeared to be reviving the destroyed world of his childhood and youth.

In Zolochiv, where fewer than ninety people of the nine-thousand-strong Jewish community survived, all his relatives and friends were killed. The Great Synagogue and the Beit-Midrash (Jewish study hall) were wiped from the face of the earth, as was the entire Jewish cemetery, including his father's gravestone. That is why, in his scenes of Jewish life in small towns, Schor conveyed with great warmth his nostalgia and pain for what was lost.

Schor's daughter Mira Schor, an American artist, culturologist, and art historian mentioned in one of her blogs how, in 1957, her father once had to prepare her lunch all by himself. "He made me some fried flour and potato soup, which, as he told me, he remembered from his childhood in Zolochiv. The soup was black, mostly boiled potatoes in a broth made with burnt flour and water, I remember this aroma and taste, which struck me as interesting at the time. It took me years to realize that this was the soup of poverty."

Marc Chagall once said: "No matter what I paint, I always paint Vitebsk." Ilya Schor might say that he always painted Zolochiv and the lost world of the civilization of Galician Jews. It is precisely these Galician impressions and images of Ilya Schor that became one of the pillars of the "Jewish style" in American art, which has been perceived over the decades as an authentically folk incarnation of the spirit and symbology of Eastern European Jewry. 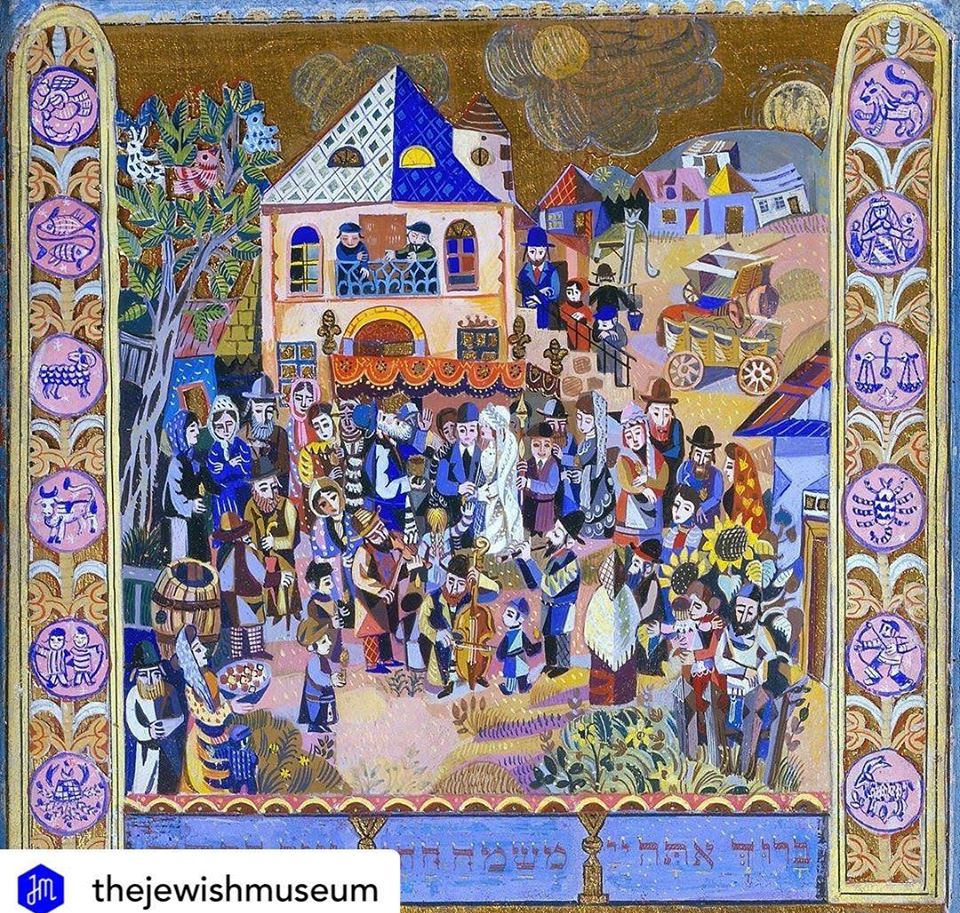