The title of the book, Amadoka, is derived from the name of the largest lake in Europe, situated on the territory of contemporary Ukraine. The novel is not about the lake but about its disappearance, the disappearance of entire worlds and cultures and about what remains in its place. Is there a link between the Jewish Catastrophe of Eastern Europe and the destruction of the Ukrainian intelligentsia during the Stalinist repressions?

In this program of "Encounters," we speak with the writer, translator, and journalist Sofia Andrukhovych about her novel Amadoka. 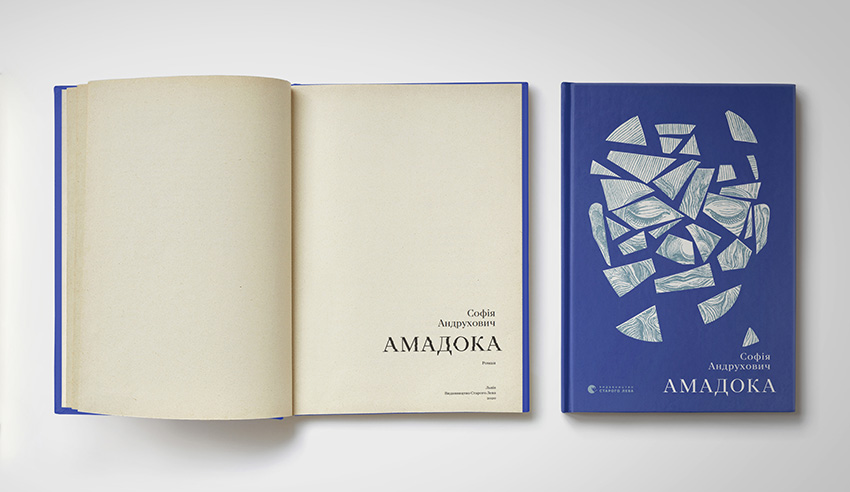 Iryna Slavinska: Amadoka is a lake that does not exist or perhaps never existed. What does this say to us as a metaphor for what we can read in the novel?

Sofia Andrukhovych: The moment I learned about Amadoka was interesting and important to me. Information about this lake exists in ancient sources, but no one knows for sure whether there was such a lake or not. There is a simultaneous existence and non-existence, outlines on ancient maps, and verbal accounts in Herodotus or Ptolemy that seemingly offer grounds for us to imagine it quite clearly. This lake was situated somewhere on the border between today's Podilia and Volyn or Galicia, somewhere close to Kamianets-Podilsky. Today practically no traces point to the existence of the largest lake in Europe, which was located on the territory of Ukraine. This is a tremendous amount of material for fantasies, metaphors, and various meanings that can be embedded in this image.

Among these meanings concerning the novel, I embedded a memory feature and various slices of memory, points of view, and phenomena linked to memory. How memory functions, what a person does with memory, reminiscences that serve as a certain protection. The feature that is intricately connected with memory is a large layer of history, of what we know about ourselves, the history of our families, the history of the country in which we live, the various parts of this country. It is what is known to us from various sources to which we refer independently, or various treatments that were proposed to us during our studies. One of the themes of my creative and artistic research was how one can deal with this theme.

Sofia Andrukhovych: In my view, a narrator can almost never be reliable. Even when we imagine scholars, historians who deal professionally with some serious topic and whom we trust as much as possible, we remember that a person has personal subjective traits on which s/he relies. Even when great efforts are applied in order to be objective, a person embeds themselves, their perception of the world, and some complexes and fantasies in the most precise scholarly work.

Iryna Slavinska: In Amadoka, is the writer Sofia Andrukhovych a "reliable narrator"?

Sofia Andrukhovych: I think not. I consider myself one of those female narrators who say honestly that they are "unreliable," and I use this as an instrument in my creativity.

Iryna Slavinska: This is probably not with the intention to mislead readers?

Sofia Andrukhovych: No, although it is kind of a mutual game. By no means do I wish to harm those for whom I am writing, but I am counting on the reader who is ready and willing to set out on this journey to which I am inviting him or her. That is why an author communicates with readers who meet him or her halfway and are ready to discover the meanings of the story, the meanings of the narrative.

Iryna Slavinska: Is there a place for truth in the novel Amadoka and in literature in general?

Sofia Andrukhovych: Yes, I think there's a lot of it there. What matters is how I feel about the truth. Facts are important, but there are things that are much more interesting to me. These things concern subjective truth and all those motivations that I listed—why a certain untruth can become a truth for one person or another. People often believe something for which they have certain grounds. I am interested in these grounds. I am not saying that everyone has their own truth, but I would like to understand why a person can regard an untruth as his or her truth.

Iryna Slavinska: How do you work with historical material, knowing that the narrator is unreliable?

Sofia Andrukhovych: This was very complicated, but I found a solution for myself in various approaches to a variety of themes. Amadoka stemmed from a theme that is connected with the Neoclassicists, with the Stalinist repressions, with the central part of Ukraine, with the persecution and destruction of the Ukrainian intelligentsia in the 1930s. This is not obvious, but in reality, the whole idea sprang from my interest in Viktor Petrov and other heroes and personalities that are mentioned in that section. This theme fascinated me, but I did not have such an intimate connection to it as I have to the theme of the Holocaust.

When I was researching the stories of the writers Viktor Petrov, Mykola Zerov, and others, I realized that I simply could not dare to fantasize so boldly. I did not even feel the intonation with which I could talk about them. One narrative method that came in handy was one where the narrator moves a certain distance away, which allows him or her to attain some form of higher sensitivity in analyzing or sorting themes that emerge. These include betrayal, loyalty, human relations, deaths, and the loss of loved ones. The narrator leading this story makes it clear that some kinds of speculations or others belong to him/her—these are his or her fantasies, his or her suppositions.

Iryna Slavinska: During the writing of the novel, there was also work in archives, regular visits to St. Sophia's in Kyiv, where these documents are stored.

Sofia Andrukhovych: There are simply incredible riches in this archive. I know that at least one author, Maryna Hrymych, constantly works in these archives. Her second novel is written on the basis of documents from the archive held at St. Sophia of Kyiv. There are very many documents, diaries, and letters of extraordinary importance. For me, these are simply gems, treasures from which you can learn much and do much.

When you arrive at a certain idea and begin to pull on the little threads, it turns out that everything that is taking place, any step of yours is part of this writing process. You cannot predict how this will affect the structure; some things are absolutely unanticipated in this process.

What happened with my archive was that initially I became interested in the topic of Viktor Petrov, and his relations with Sophia Zerova. I read works by Vera Ageeva, Viacheslav Briukhovetsky, and other literary specialists. I tried to approach this topic of Viktor Petrov's letters to Sophia Zerova from one side then another. A thread was constantly popping up, around which I felt intuitively that it is possible to build many subjects and treatments, to find the key to understanding what happened.

I found out that the letters are stored in an archive, but I thought that it is extremely difficult to gain access to it. I had never dealt with anything like this before; that's why I procrastinated. But finally, the moment came when I realized that I have to try out this variant, in order to push through. As soon as I began working with these letters, I was told right away that I could make copies of all the letters that are available. It was as though nothing special was happening there in the archive, but I simply wanted to be there. I did experience some not entirely comfortable moments, but they charmed me somehow and spurred me toward certain ideas connected with the text that I had jotted down. I decided simply to come and read the letters there in the archive.

I sensed and saw how various elements were dictating a narrative line of my novel, about which I had never suspected earlier. I began to see that my heroine had to be an archivist. I began to outline for myself what she lives and exists in; what this work in the archive gives her; how she delves into these documents; what her traits may be—what this seclusion of the setting means, the age of these walls, the deep silence that reigns there. What all this can say in the case of a person who spends a great deal of time among the fragments of the lives of people who no longer exist today but who can recount quite a lot about us ourselves.