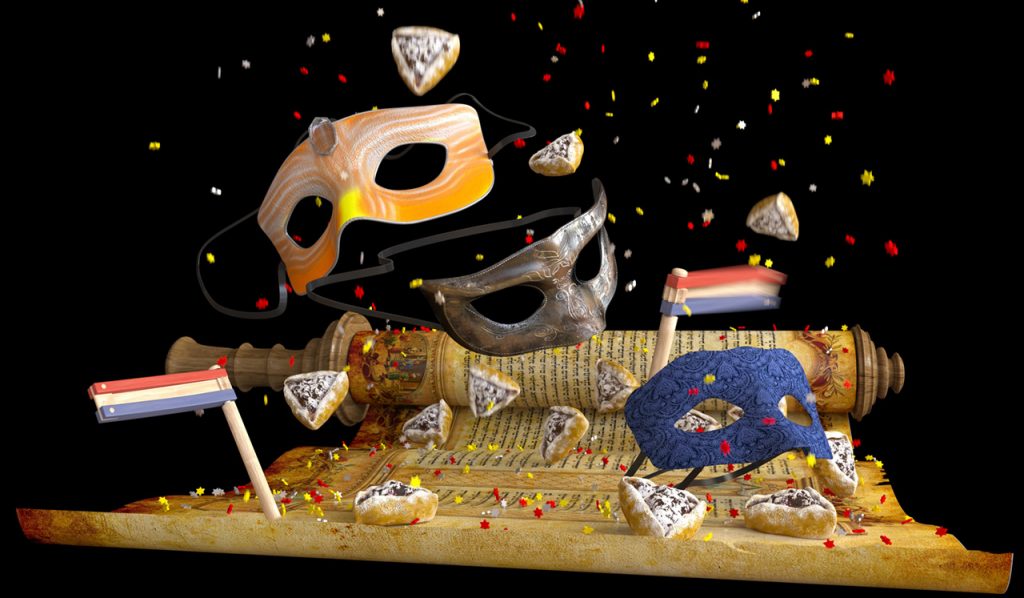 Purim is a holiday Jews observe in memory of an ancient Jewish victory. The story of Purim is recounted in the Book of Esther in the Bible. It’s a story of treachery and warfare in ancient Israel, but it has eerie parallels with the bloody 20th century in Europe.

About 2,500 years ago, the Holy Temple in Jerusalem was destroyed by the Babylonian king Nebuchadnezzar. He banished the Jewish people from Israel to Babylonia.

Fifty years later, Babylonia was defeated by Persia, the most powerful kingdom in the world at that time.

Achashverosh was the second Persian king, also known as Xerxes the Great. One day he threw a lavish party and ordered his queen, Vashti, to dance at the extravagant feast. She refused, which infuriated the king. On the advice of his counselors he deposed and banished her, as an example to other women who might be emboldened to disobey their husbands.

The king now needed a new queen. So he sent his men in search for someone even more beautiful than Vashti.

In the capital city, Shushan, a Jewish orphan named Hadassah lived with her uncle Mordechai, the leader of the Jews. She was kind and gentle … and very beautiful. When the king’s men came for Hadassah, Mordechai said to his niece: “Don’t be afraid. Go. But don’t tell them you are Jewish. Use your Persian name, Esther. God will watch over you!”

As soon as the king saw her, he was struck by her beauty, and promptly chose her as his new queen. Esther kept her secret … but did not forget her Jewish faith. To help her keep track of the days, and remember which day the Sabbath was, she appointed seven maidservants—one for each day of the week.

Every day, Mordechai sat outside the palace gate, waiting for a visit and news from Esther. One day he overheard two men plotting to kill the king. He told Esther, who revealed the plot to the king and saved his life. Mordecai’s act of kindness was preserved in the chronicles of the king.

Soon after, Xerxes appointed Haman — the richest man in the kingdom — as his prime minister. Haman wore a large medallion, engraved with the picture of an idol.

Since Jews are forbidden to worship or honor idols, Mordechai refused to bow down to Haman. When Haman found out Mordechai was not bowing down to him, and why, in revenge, he devised a scheme to annihilate every Jew in the empire.

Meanwhile, Mordecai learned of the plot and shared it with Esther. Risking her own life, she revealed her Jewish heritage to the king, along with Haman’s diabolical plot to have her and her people killed. In a rage, the king ordered Haman to be hanged on the very same gallows Haman had built for Mordechai.

Mordecai was promoted to Haman’s high position and Jews were granted protection throughout the land. The king also allowed Mordechai and Esther to write a decree allowing the Jews to defend themselves from attacks. On the 13 day of the Hebrew month Adar, the Jews defeated five hundred of their enemies, including Haman’s ten sons … who were hanged in Shushan.

Purim is celebrated on the 14th of Adar, the day after the Jews emerged victorious against Haman. Mordecai and Esther called the holiday Purim, which literally means “lots.” Haman cast lots to determine the date he would carry out his genocidal plan.

The Jewish community of Ukraine celebrates Purim by remembering the Hamans of the 20th century — Stalin and Hitler.

Like Haman’s ten sons, in 1946, ten of Hitler’s top associates were put to death by hanging. An 11th Nazi, Hermann Göring, committed suicide the night before the execution, a parallel to the suicide of Haman’s daughter. There are rumors that Göring was a transvestite, making that an even more accurate parallel.

In 1953, Stalin was planning to deport most of the Jews in the Soviet Union to Siberia. But before he gave the order, he suffered a stroke and died a few days later.

According to a popular story, the Lubavich Hasidic Rebbe Menachem Mendel Schneerson was asked to give a special blessing on Purim for the Jews of the Soviet Union. It was in 1953, and the Jews were facing grave danger. Instead of giving a blessing, the Rebbe told a story. A Jewish man was out voting in the Soviet Union one day. He heard people cheering for the candidate, who was of course hand-picked by the state. The man didn’t want to join the crowd in cheering but was afraid not to. So while out loud he was cheering Hoorah! Hoorah!, in his heart he was thinking in Hebrew the words “hu ra,” which mean, in translation, “he is evil!” So with Stalin in mind, the 1953 gathering began chanting “hu ra!” That very night, Purim in 1953, Stalin suffered his fatal stroke.

Despite its tragic aspects, the holiday of Purim is for Jews a jolly celebration of victory and survival. Across Ukraine today, even in war-torn areas, Jews observe and celebrate Purim. They hold performances depicting the history of the holiday and the unity of the Jewish people, throw raucous costume parties, and of course enjoy delicious traditional Jewish food. Traditional dishes include “kreplekh” (meat-filled dumplings) often served in soup, and triangular cookies filled with poppy seeds or jam called “umentashn” … meaning “Haman’s Ears.” Charitable giving also plays an important role in the celebration of Purim.