The mysterious fate of a Jewish hero of Ukraine 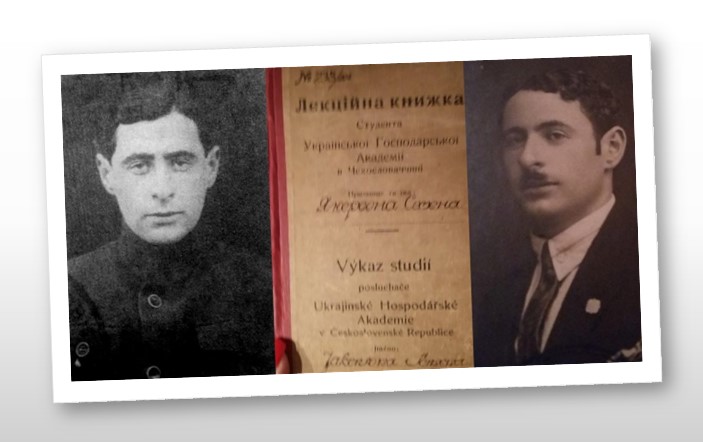 In December 2017, a memorial plaque was dedicated in Vinnytsia in honor of Semen Yakerson, a Jewish officer of the Ukrainian National Republic Army. But his life in exile in Czechoslovakia and the circumstances of his death were covered with a fog of suspense.

Dozens of members of the Ukrainian mass media covering the opening of the memorial plaque reported the same information: "Yakerson Semen Samiylovich (November, 30, 1897 - 1944) – sotnyk (officer) of the Ukrainian Army of the People's Republic of Ukraine. He was a volunteer from May 1918 in the Ukrainian army, serving in different military units: the Odessan Haidamak brigade, the First Regiment named after Vynnychenko, the Third Iron Division, and the artillery unit of the First Machine Gun Division. Participated in many battles and wounded. Lived in emigration in Czechoslovakia. Died in the Prague ghetto."

It was also known that in the late 1920s Yakerson graduated from the Hydrotechnical Department of the Ukrainian Academy of Economics in Podebrady, Czechoslovakia and worked as an engineer in Prague.

The name Yakerson is derived from the Jewish masculine name Yakir, which means "dear, sweet" and the ending "son" in Yiddish means a son. Thus, Yakerson is translated as "the son of Yakir".

In starting my own investigation of the unknown pages of the life of a Ukrainian Jewish officer, I turned to Irina Fleishmanova, an activist of the Jewish community in Prague. She helped me gather important information in the Czech archives.

It turned out that after graduating from the Ukrainian Academy in Podebrady, Semen Yakerson worked as an engineer for the construction of bridges. A knowledge of the Ukrainian language helped Semen find employment. The Lanna company sent him to work in Transcarpathia ("Subcarpathian Rus"), which was then part of Czechoslovakia.

Before leaving for Transcarpathia in 1930, Semen Yakerson married in Prague a girl named Anna. Their descendants do not even know if she was a Czech or Ukrainian by birth.

In 1934, the couple had a son, Jiri, who in the future would also become a civil engineer. Semen Yakerson designed and built roads and bridges in Uzhhorod, Rakhiv, and near the Ukrainian village of Kvasy—a resort with mineral waters.

In 1938, after the dissolution of Czechoslovakia and the Hungarian occupation of Transcarpathia, the Yakerson family returned to Prague. They were overtaken by the Second World War and the German occupation.

The only victim of the Holocaust in the Yakerson family was Semen's mother Elizabeth (Leah). Jiri recalled that in 1943 he came home from school and saw that people in long black Gestapo coats thrust his grandmother into a car.

Exactly the same archival riddles concerned the fate of Semen Yakerson. His name did not appear anywhere—neither in German documents and deportation lists, nor in the Czech "Register of the Dead in Prague for 1940-1949."

It turned out that the non-Jewish wife shielded Semen from death. Mixed married pairs by German rules could remain temporarily living in their homes. In 1941-1943, only Jewish families were concentrated in the Terezin ghetto near Prague. By November 1944, this ghetto was practically deserted as all the Jews were deported for destruction to Auschwitz and other death camps.

In the winter of 1944/1945, the Nazis began to deport Jews from mixed families from Prague to Terezin, and their non-Jewish spouses were sent to labor camps. Huge pressure was put on the couples to divorce.

Anna exhibited heroism and hid her husband. They stayed together in Prague and waited for release in May 1945.

After the war, Semen Yakerson worked again as a civil engineer. From August 1945, they lived in the Vinohrady area (now Praha II) on Manesova Street 1649/86.

In the Prague list of permanent residence of citizens (Přihláška trvalého pobytu občana), the recorded date of Semen Yakerson's death is 27 March 1951. He died in hospital at the age of 53, after a heart attack. His body was cremated and buried in the Strašnice cemetery in Prague.

We must note that Semen Yakerson, who escaped Nazi persecution, could have become a victim of persecution by the Communists. A couple of months before his death, the arrests of those people which in 1948-1949 on Stalin's order sent weapons and aircraft from Czechoslovakia to Israel began. In November 1951, the communist leader Rudolf Slansky (a Jew) and a dozen other major functionaries of the government of Jewish origin were arrested.

The antisemitic campaign of 1951-1952 against "cosmopolitans and Zionists," conducted from Moscow, resulted in executions and prison terms. The press was filled with articles against "Jewish traitors to Czechoslovakia." Perhaps Semen felt the atmosphere of the beginning of this anti-Jewish persecution, and this caused a heart attack.

In addition, his heart could not withstand the repentance and sorrow for the death of his mother, which Semen could not save.

I suppose that a concern for his mother is the reason for the total silence of Semen Yakerson in 1926-1927 during the trial of Sholom Schwartzbard, the murderer of Simon Petliura.

This murder and trial caused a storm and heated discussions in Jewish and Ukrainian circles. The Ukrainian diaspora, inside which Yakerson was at the time of study at the Ukrainian Academy, could ask Semen to speak at the trial. But he made no statements—neither in support of Petliura, nor against him.

His mother Elizabeth had remained in Vinnytsia. In fact, she was a hostage in the hands of the Bolsheviks. Yakerson probably chose silence, so as not to expose his mother to danger. Elizabeth was released from the USSR to Czechoslovakia to her son only in 1928.

When Anna died in 1978, she was buried next to the ashes of her husband. After the death of their son Jiri in 1995, no one took care of extending the payment of the grave of his parents for the next ten years. Therefore, the urns with the ashes of Semen and Anna Yakerson were transferred to a common grave, and their place in the cemetery was sold to other people.

Therefore, the brief results of our investigation include the following conclusions:

- Semen Yakerson was not only a Ukrainian officer, but also contributed to the development of Ukrainian Transcarpathian infrastructure.

- The Jewish-Ukrainian hero Semen Yakerson survived the Holocaust. He was not in the ghetto and died in 1951. The information on the memorial plaque in Vinnytsia needs to be corrected.

- The name of his mother, Elizaveta Yakerson, a native of Vinnytsia, needs to be added to the database of Holocaust victims at the Yad Vashem Institute in Israel.