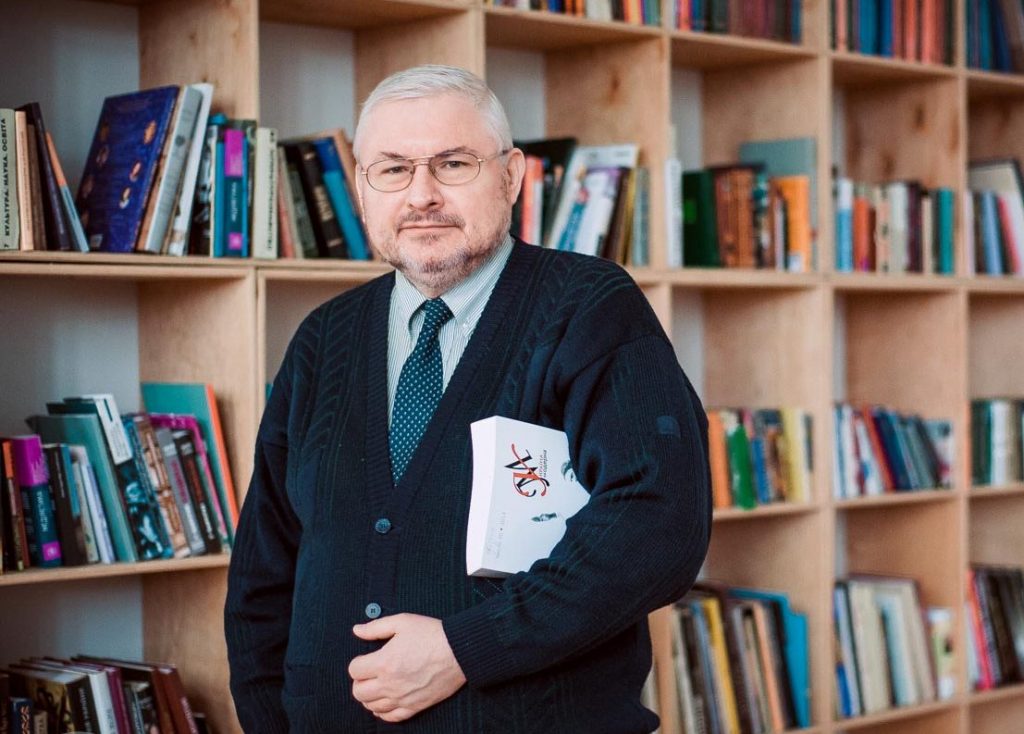 The first part of our conversation with the translator Andriy Pavlyshyn about Grzegorz Gauden’s book Lviv: The End of Illusions; The Story of the November 1918 Pogrom

Iryna Slavinska: Who is Grzegorz Gauden?

Andriy Pavlyshyn: Gauden is a fantastic personality who is familiar to many Poles and translators from the Polish language. For many years Gauden was the director of key Polish institutes that are very important for the country’s cultural and political life. Both times after the Law and Justice Party (Prawo i Sprawiedliwość, [PiS]) came to office, he was removed from these posts — political revenge on the part of the populists who had come to power in the person of Jarosław Kaczyński.

Grzegorz Gauden was born in Poznań; he is a journalist and lawyer by training. In the late 1970s–early 1980s, he was an activist of the Solidarity movement; for this, he was hounded and forced to immigrate to Sweden, where he obtained Swedish citizenship and learned a number of European languages.

In 1989 a revolution took place in Poland, and the government changed. He returned to Poland, where he began working energetically. For several years he was the editor-in-chief of the newspaper Rzeczpospolita. Grzegorz took the liberty of expressing many truths; he wrote openly. The newspaper was truly an interesting one, but he ended up having to leave.

After comparatively liberal European forces came to power, he became the head of the Polish Book Institute. This institution is responsible for libraries, publishing, and translators. The Polish Book Institute has a large center in Cracow, where translators can live, supported by grants. Large-scale international congresses of translators take place every four years. After the Law and Justice Party came to power, he was forced once again to leave his government post and return to private life. 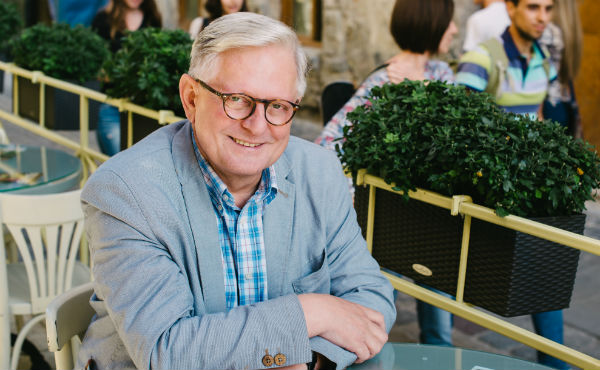 He visited Lviv often and became interested in the topic of pogroms. Grzegorz was always a free-thinker; he wrote what he deemed necessary. He belongs to the milieu of Polish intellectuals, and they are very circumspect about interpreting the crises and problems of Polish history and Polish culture. They say what they think, but cautiously, abiding by all the norms of political correctness.

Before publishing this book, he had doubts for a very long time. The motive for writing it was not an attempt to bid goodbye to the past or to free himself, but a situation that Stanisław Jerzy Lec described very succinctly at one time: “When a decent person’s eyes open, his mouth no longer closes.” He visited Lviv often; he loves our city. For many hours at a time, we walked through the city, and he talked about it and about his life. One day we had a conversation about a certain photograph showing the ruins of the Beit Hasidim Synagogue that was burned down in 1918. He asked: “From 1941?” “No, 1918. This pogrom was organized by the Poles,” I said. At this point, his internal intellectual work began. He wanted to make sure that this was not a myth or slander. 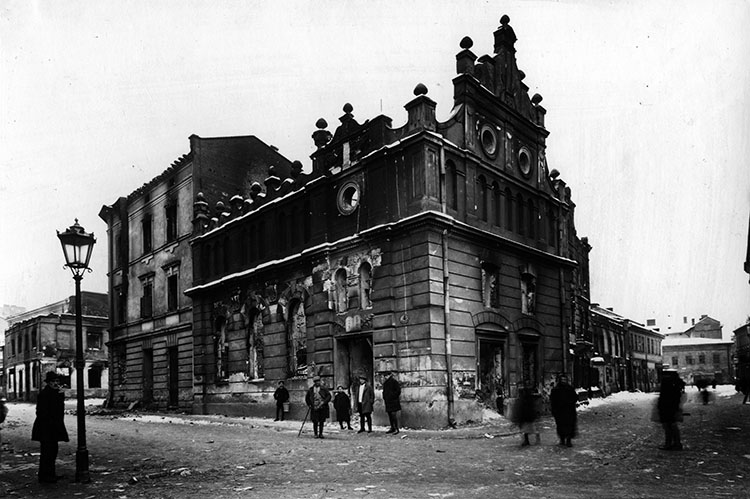 Iryna Slavinska: Did he have to rid himself of some of his own stereotypes about Ukrainians? How does this internal work take place?

Andriy Pavlyshyn: Grzegorz is a person of delicate sensibilities, very educated, with the immense experience of living in Sweden, which has a very advanced notion of national and gender minorities. The first and greatest problem that he had to deal with was not the problem of Ukrainians and stereotypes about them. He had to shatter a significantly bigger stereotype: the internal stereotype about the Polish nation. His book, I would say, is a “political pamphlet” against the nationalist myth of Endecja [Polish right-wing] Lviv, the sacred Lviv “Eaglets,” the celebrated view of the Kresy [eastern borderlands], where imperialist circles of Poland considered they carried the light of civilization, education, and culture and Ukrainians were an impediment. Like all educated people, Grzegorz knows about the pogroms that took place in Lviv in June and July 1941. At the time, the situation was very complex; many multidirectional factors were involved in the process. Owing to the significant lack of documents, it was very difficult to disentangle this situation. In the meantime, this is still an open question, and sooner or later, Ukrainians will have to re-evaluate their role, as well as the role of others.

Grzegorz realized that after the Ukrainian army left Lviv [22 November 1918—Ed.], the Poles comprised a total, dominant majority. They were in full control of all structures. They were not foreign occupiers, like the Germans in Lviv in 1941. These were people who had a perfect grasp of the situation, they knew the topography of the city, its residents, and they sensed the mood in the city. The pogrom took place over three days; in other words, it was completely controlled—this was no spontaneous outburst, although the Lviv “street” emerged and took part in the pogrom. Furthermore, very many documents about this pogrom are extant. The problem was that these documents were stored in the archives of Lviv and Warsaw and are now in poor shape. 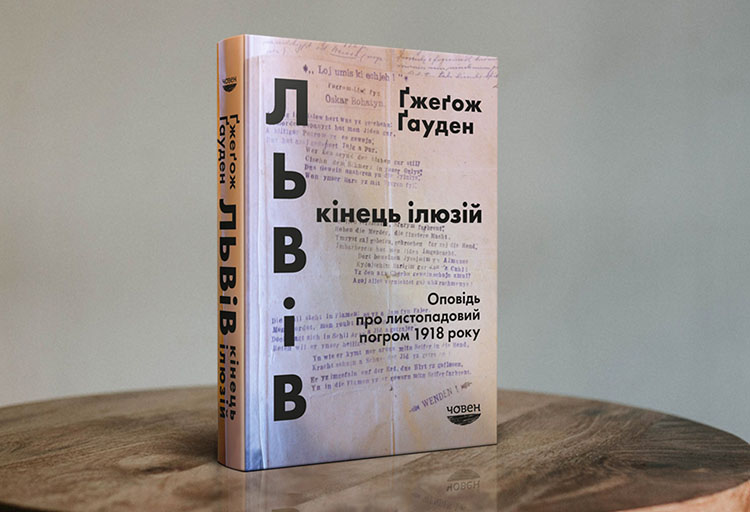 Iryna Slavinska: How did it happen that this tragic and outrageous story was not well known earlier?  Is this a matter of collective amnesia? How should we properly view this?

Andriy Pavlyshyn: I don’t claim to have a definitive answer. Grzegorz and I had our own version; he set it out completely, consistently, and comprehensively in his book. After the pogrom, the police arrived in Lviv and wrote up a report. In addition, a two-man commission of Polish lawyers was working in Lviv; it, too, prepared a separate report for the Polish government, the Ministry of Foreign Affairs. British and American missions were also working in Lviv, including a mission led by Henry Morgenthau, Sr. from the United States. Four reports were prepared by foreigners; at least two of them by Poles. All of them were carefully hidden away in the archives of the respective services. The Polish [foreign affairs] ministry and the government did everything possible to ensure that the truth about this pogrom would be forever hidden in the archives; that the word “pogrom” would not be heard on the international stage. This was needed to be done to justify the 1918-1919 annexation of Halychna [Eastern Galicia] to Poland, which was recognized formally [by the international community] in 1923. The foreign supporters of the Polish government accepted this, as they were informed that the Jews were sympathetic to the Soviet Union and that there were many communists in that community. Only the British Lord Samuel dissented and openly wrote that this event was a pogrom in the Russian style. Thus, a myth was formed during the interwar period in Poland about the “defenders of Lviv” and how the city was a citadel of the spirit of Polish nationalists such as Roman Dmowski, racists, and antisemites. Lviv was one of the most antisemitic cities in [interwar] Poland.

After the Second World War, this myth was preserved in Polish consciousness. It was difficult for Poles to challenge this myth as Poland during the Second World War experienced huge losses of territory and population. In independent [post-communist] Poland, this issue started to be explored in scholarly journals with a limited circulation. But only with Gauden’s book was this problem presented front and center. He consulted with many influential public figures for prefaces, and eventually, his book was published in 2019. Within a year, it had three print runs and became a popular read in Poland. It is important to note Polish nationalists are not able to challenge this book as an entire brigade of scholars and editors from the publisher in Cracow worked closely with the archival material for almost half a year and verified every word. Everything is documented, and the book presents every viewpoint. The book is written in a lively manner in the Annales school of history style. Gauden’s book is a wonderful novelistic essay, a novelistic reportage. His wife worked very closely with him on the book, and he sent drafts to many readers for review, including me.

Irina Slavinska: Is the history of the November 1918 pogrom equally unknown in Poland and Ukraine?

Andriy Pavlyshyn: This history, like the history of Lviv in general, is widely known in narrow circles. The fact of the November pogrom was no secret to historians, or to regional historians. For those who are interested in Lviv’s and Galicia’s past, it is impossible to avoid it. Nineteen-eighteen was a turning point for the Zionist community of Lviv. There were two very large groups in the Jewish community in Lviv. There was the assimilationist group, those Jews who advocated joining Polish society and fully accepted the Polish language and culture and considered themselves Poles of the Jewish faith. Their opponents included an influential group of Zionists, who fought fiercely to be considered a separate national group. They sought government support to educate their children in their native language of Yiddish. They wanted Jewish high schools to be officially granted the right to issue diplomas to enable university admission and the removal of quotas for Jews in higher education.  The Lviv pogrom of 1918 was a disaster for the assimilationists, who yearned to be accepted on an equal basis in Polish society but who, like similar Jews in Germany later, encountered attitudes that considered them an inferior racial group. The assimilationists pleaded with Polish military authorities to stop the pogrom, but the Lviv commandant ignored their entreaties, and only pressure from a general higher up put a stop to it on the third day.

This history was known to Ukrainians, but Ukrainian historiography is still weakly developed and does not have as many opportunities and resources yet as the Poles, whose historiography has evolved almost without interruption—with the exception of a narrow period in the second half of the 1940s during Stalinism. After 1956 Polish historiography emerged once again, and historians knew the story of the pogrom, but they kept quiet as they didn’t want to disturb the idealistic image of the Kresy.

Irina Slavinska: It’s hard to understand the concept of the Kresy when you are a former colony. This view is perhaps more of an imperial view of these territories.

Andriy Pavlyshyn: This is a very masked view. This is the view of a white person who carries civilization to the natives, cannibals.

Irina Slavinska: And later, it’s puzzling for them why the cannibals don’t understand the concept of Kresy.

Andriy Pavlyshyn: Yes. And then other myths about Lviv emerge, such as those about the batiars [the urban street subculture of petty hooligans].

Listen to the audiophile for the complete program.