The tragedies of Ukrainian and Jewish history and the present day: An open dialogue in Israel

Posted On: December 21st, 2022
Posted In: Israeli Friends of Ukraine, Sponsored Projects, The Holocaust in Ukraine, Other Programs, History 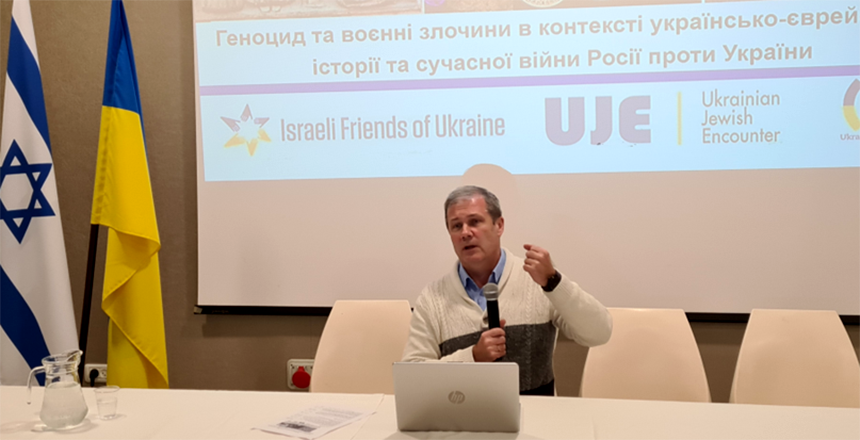 The international seminar "Genocide and War Crimes in the Context of Ukrainian and Jewish History and Russia's War against Ukraine" has opened up new horizons for understanding questions related to the joint history of Ukrainians and Jews.

For the eighth consecutive year, this year's event took place on 8–10 December 2022 in the Israeli city of Netanya. This scholarly-educational and discussion platform, initiated by the civic organization Israeli Friends of Ukraine, was supported by the Canadian charitable non-profit organization Ukrainian Jewish Encounter (UJE).

A key attraction of the seminar has always been the frank discussions of the most difficult and painful topics pertaining to Ukrainian-Jewish history — a serious dialogue in which leading historians take part.

The topic of the 2022 seminar was prompted by the realities of Russia's criminal war against Ukraine and its people. Compounding the blood that was abundantly shed in the lands of Ukraine in past centuries are the tragedies being caused today by Russia's barbaric aggression.

The Israeli organizers of this year's seminar decided that conducting a dispassionate and purely academic conversation about questions relating to the Ukrainian-Jewish legacy was not possible without taking into account the terrible facts that have burst into contemporary history with words from Bucha, Irpin, Borodianka, Izium, and many other places in Ukraine.

The seminar speakers were:

Dr. Kharchenko opened the seminar with a synopsis of how the discussion of genocide is taking place in Ukrainian society and the academic milieu.

Different voices are being heard in the search for a definition of Russia's war against Ukraine. The main arguments being put forward by specialists are focused on the question of whether the actions committed by the Russian army against the people of Ukraine fall under the definition of genocide adopted by the UN. Other scholars suggest that these actions may be characterized only as war crimes and violations of the law of war.

Prof. Wolf Moskovich outlined how Israelis perceive the Holodomor and other tragic events in the shared history of Ukrainians and Jews. He called the willingness of the municipal authorities of the Israeli capital to erect a monument to the victims of the Holodomor in 2023 a "radical change."

Prof. Moskovich also expressed his fears that the uncritical publication of a Ukrainian translation of a book about the Holodomor that was issued in the late 1930s by the Reich Ministry of Propaganda headed by Goebbels might trigger a wave of antisemitism in Ukraine and play into the hands of Russian propagandists, in order to blacken Ukraine's name in the eyes of the West.

Prof. Oleksandr Zaitsev's lecture, entitled "Jews in the Ukrainian Nationalist Discourse of the 1920s and 1930s: How Discursive Aggression Preceded Physical Violence in Wartime," was thorough and fundamental. The Lviv-based historian presented a wide array of ideas put forward by various ideologists and activists who belonged to the nationalist movement during the interwar period. He outlined the development and strengthening of the antisemitic element on the eve of the Second World War and the influence of the ideology of German Nazism on the radicalization of attitudes toward the Jews within the OUN milieu.

This topic was continued in Prof. Zaitsev's lecture on "Ukrainian Nationalists and the Holocaust: Truth and Inventions." The speaker divided information on the participation of the two OUN currents in the genocide against the Jews into three categories: 1) documented facts, 2) facts that spark discussions and require substantiation, and 3) fabricated information. For example, in the second category, he includes the confirmation by a number of historians of the participation of OUN activists and soldiers of the Nachtigall Battalion in the Lviv pogrom in the summer of 1941.

The UK-based historian of the Holodomor, Dr. Daria Mattingly, talked about the fate of Jews during the Holodomor who were both perpetrators and victims of this tragedy. By way of illustrating the multidimensionality of the whole picture of those horrific events, the speaker recounted events in the spring of 1933, when Jews from starving Ukrainian towns gathered at railway stations in anticipation of gaining permission to leave for Birobidzhan, but the Soviet authorities — officials of Jewish origin — did not issue the permits to leave Ukraine. As a result, these Jews were left starving at the stations, where they were robbed.

Dr. Mattingly drew parallels between the confiscation of Ukrainian grain in the 1930s and Moscow's exploitation of the grain problem, including the threat of global starvation, as part of the Russian Federation's current war against Ukraine.

In his presentation about the kidnapping and deportation of Ukrainian children, Dr. Kharchenko also pointed to the similarity between the methods that the communist government of the USSR implemented during the Holodomor and current operations to transport Ukrainian children to Russia, which have been happening during the current war.

The author of these lines recounted the multifaceted tragedy of the Proskuriv pogrom, which took place on 15 February 1919. In terms of the scale and methods of the cold-blooded, targeted mass killing of the civilian population by the military units of the Directory of the UNR headed by Petliura (1,600 Jews killed in 3.5 hours), this event may be compared to the Holocaust.

In my presentation, it was important for me to emphasize that both Ukrainian perpetrators and Ukrainian Righteous, some of whom paid with their lives to save their Jewish neighbors from the pogrom, were involved in these horrible events. Some people from the city of Khmelnytsky (previously called Proskuriv) who were present in the hall commented that in the public space of their native city, the pogrom is not discussed, and people do not want to remember "unpleasantness."

Turning to the present, my second lecture was entitled "From 'God Punishes the Descendants of Evildoers' to 'Helping Ukrainians Is a Moral Duty': Judaism and Israeli Society in the Search for a 'Jewish Response' to the Ukrainian People's Tragedy during the War of 2022."

I illustrated my lecture with videotaped statements made by various rabbis and civic activists in Israel, in order to show how anti-Ukrainian stereotypes were occasionally expressed in Israeli society and how Israeli attitudes toward Ukraine and Ukrainians have become positive during the war.

Dr. Alla Marchenko used the example of the city of Uman to discuss the different ways that Ukrainians and Jews preserve the memory of past mass tragedies against the backdrop of the current war. The Ukrainian scholar emphasized that the historical figures which are most well-known to local Ukrainians (Gonta and Zalizniak) are symbols of the biggest historical tragedies for Jewish pilgrims who visit that city.

For the forum participants, the roundtable "Your War: How Has the War Affected You and Your Families and Friends?" was a kind of group therapy session. Dozens of people shared their personal experiences and strongest impressions of the ongoing war. It turns out that the war against Ukraine has left wounds and scars even on the souls of people who have not been directly affected by military operations. In fact, this war has become the most powerful factor in the solidarity between Ukrainians and Israelis.

As Dr. Kharchenko commented, among the forum participants were people who had arrived in Israel only recently, fleeing the war. "It seems that each person present was looking for an answer to his or her own questions. Some looked for ways to respond to aggressive Russian propaganda; others, frantic with anxiety for their loved ones and friends back in Ukraine, thought about how to stop this merciless aggression."

One important success of this year's international forum was that the lectures reached a wider audience with the aid of the latest communications technology. Over 4,200 people attended the seminar lectures via video conferencing. The seminar in 2021 was attended virtually by nearly 3,000 people. This year, the live dialogue in the events hall was seen by a significantly larger number of virtual attendees.

Dr. Mattingly said: "The seminar has demonstrated the need for further study of shared Ukrainian-Jewish history. No matter how tragic some pages of this history have been, the topics that were raised at the seminar allow for a better understanding of current events in Ukraine and Israel. The dialogue among the participants was sincere, lively, and full of revelations. I was honored to be part of the seminar, to share my findings, and to learn from others. The lecture about the Proskuriv pogrom and its vivid details, as well as its lost actors, made a lasting impression on me. There was also an opportunity to learn about the work of the Israeli participants. My only regret is that the seminar went by so quickly!"

Prof. Zaitsev said: "I am convinced that this kind of seminar is necessary and beneficial for popularizing the research of interwoven Ukrainian-Jewish history and for enhancing mutual understanding between our peoples. A special role is played here by recent émigrés from Ukraine who, as I have come to realize, are truly concerned for its fate. My only wish is to see more information about the seminar — its lectures and videos — highlighted in the mass media and social media. I wish your seminar a long and successful life."

Dr. Kharchenko noted: "The atmosphere at this year's forum was radically different from previous years. The reason is obvious: the war that the RF has been waging for ten months against Ukraine. At the same time, the forum has sustained its very important mission of being a space where the citizens of Ukraine and Israel get to know more about each other."

The Kharkiv-based researcher added: "The forum successfully brings together top academics with members of the public who are interested in the set of issues proposed by the organizers. This year the lecturers included such well-known researchers as Dr. Daria Mattingly from Cambridge and Prof. Oleksandr Zaitsev of the Ukrainian Catholic University."

Dr. Kharchenko also noted that this event in Israel "always takes place via honest discussion from which no topics are excluded, no matter how painful they might be at first glance. Once again, the forum was not a series of competing claims but a fruitful dialogue about shared values in the present and future."