The Ukrainian-language edition of Doris Bergen’s book "War and Genocide: A Concise History of the Holocaust" has appeared 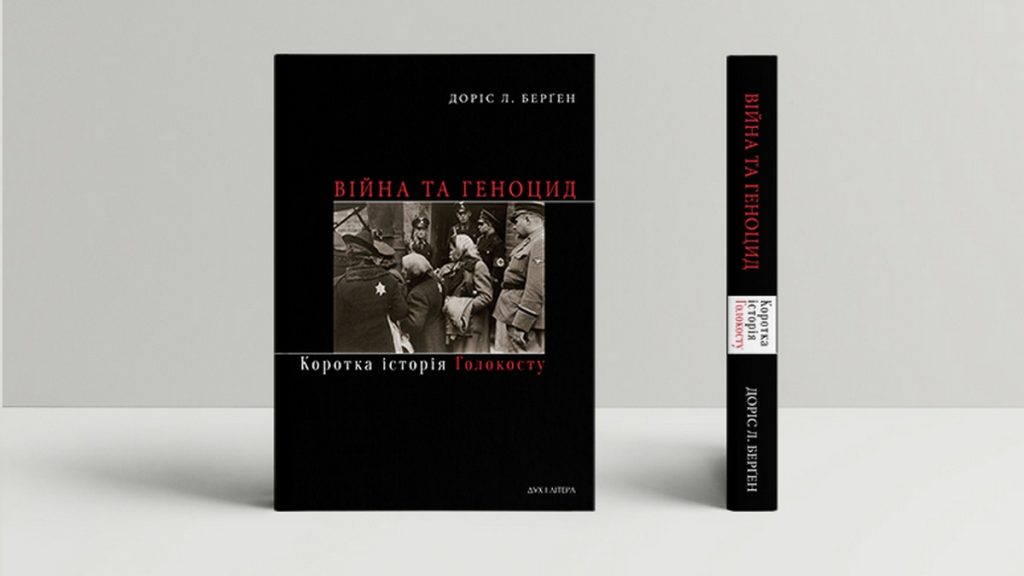 The book's strength lies in its accounts, devoid of excessive simplification, of events and the life of Jews and other victims of the Nazi regime.

A conversation with Tetiana Borodina, the scholarly co-editor of this publication, a post-graduate student in the Doctoral Program at Kyiv-Mohyla Academy, and an associate of the Center for Studies of the History and Culture of East European Jewry (Judaica Center).

Vasyl Shandro: What is this book about? Who is the author? What new subject of discussion does this book offer? Is it one of the bricks in a large wall of research on the Second World War and the Holocaust?

Tetiana Borodina: Everything that I will say reflects my contemplation of the book. I will talk about how I see the book. Doris Bergen is a Canadian historian. She teaches at the University of Toronto in the Faculty of History and is a member of the Academic Commission of the Mandel Center for Advanced Holocaust Studies at the United States Holocaust Memorial Museum in Washington, DC. Her circle of interests includes research on various aspects of the Second World War: questions of violence, gender, ethnicity, and religiosity. She covers all these topics in her academic work.

The third edition of this English-language book has been published. At the present time, we have a Ukrainian translation of the last edition, which is supplemented with new photographs.

So, what is new about this book? I would say that for the Ukrainian reader, it will be interesting due to the positioning of the content for the audience for which it is intended. We have many translated works, fundamental research on the history of the Holocaust, legal aspects, literary works, and children's books that address this complex history.

However, in reality, we have few publications that, from the global viewpoint, reveal the history of the Holocaust and the Second World War to readers who do not know very much about these events.

The book is intended for a readership that is just beginning to familiarize itself with this complex topic. I believe its strength lies in the depiction of the entire spectrum of events, without excessive simplification, of how the Holocaust is intertwined with the Second World War, and it shows the life of Jews and other victims of the Nazi regime — Jehovah's Witnesses, the Roma, homosexuals, Polish intellectuals, etc. This is a book that is accessible to the Ukrainian reader.

Vasyl Shandro: In what way is the Second World War written into this book?

Tetiana Borodina: Doris Bergen, at the beginning of the book, outlines the key themes she considers important and develops them throughout the work. One of the important theses of the book is that the Holocaust is closely interwoven with the Second World War. She poses the question of whether the Holocaust would have taken place without the war. The author proves that the Holocaust was not a single-decision event. This was a dynamic, a process that had its changes, quantitative indicators, and methods of killing during various periods. This is very important to understand. For Bergen, the Holocaust was an event on a global scale, which had repercussions for the whole world. Through the stories of specific people in the book, she shows how Jews could emigrate from Germany to other continents and establish their lives there. Events could take place in a different way. Someone could come here.

The Second World War and the Holocaust are events that accelerated large-scale changes in the world, and this is the focus of her work.

Vasyl Shandro: There are diverse phases and stages that have been mentioned. As an example, I will cite the topic of the Holodomor, the genocide of the 1930s, a topic that is closer and more understandable for our listeners. Previously, one could hear: "But where is the document which states that a Holodomor must be created in Ukraine?" Of course, this is absurd, and there is no such document. Instead, there are many documents about how to seize grain; there are other indirect orders. All these stories are woven into the tragedy that took place. What stories are featured in this book?

Tetiana Borodina: Yes. What I like about it is the way the material is laid out. The author adopts a certain integral approach by using many private stories of survival during the genocide; the actions of people on the eve of and after it happened. She introduces stories into this context in order to confound our understanding of this process. For example, Bergen shows how three different people from different strata and of various ages lived in Nazi Germany in 1938.  There is a young man in the Hitler Jugend, who writes in his memoirs about his good life and how Nazi Germany is a grand power. He feels fortunate to be in his youth in the context of a strengthening power. She shows another story of a Sinti boy who, at the same time in the same Germany has experienced victimization and limitations due to new legislation. She writes a third parallel story of the life of a Jewish professor at Dresden University and describes his life in 1938. She describes not only restrictions on his academic work but also how he is denied university privileges such as using the library, and then the confiscation of all his property, including pets. These are three parallel stories in the year 1938. You cannot look at this history as though things were good for everyone and that everyone supported and welcomed the Nazis in this period. She presents these stories to complicate our understanding of Nazi Germany, the Holocaust, and the Second World War.

Vasyl Shandro: As regards terminology, the author indicates variants of names that we often use and resort to generalizations. There are explanations about whether the Germans organized it or the Nazis because they were a supranational entity. To what extent is this an important direction with regard to the way we call one phenomenon or another in Bergen's work?

Tetiana Borodina: She poses many rhetorical questions to the reader, forcing him/her to think how s/he would answer a particular question. She does not give a clear-cut answer about how to do this. For her, using the term "gypsies" is unacceptable. She deliberately uses the term "homosexual" because this is important for her. She says that she uses the term "traditional participants of the genocidal process." We are not talking about concrete people. At issue are certain categories of population groups that become involved in the genocide in various ways: as criminals, victims, rescuers, collaborators, and eyewitnesses. She presents throughout her book the positions of all these categories through their witnessing of events, through their photographs, and through their memoirs and reflections. It is quite honest to present the voices of all these groups to the reader. And this complicates the understanding of this process. Because there are not just bad wrongdoers and good rescuers. There are certain "gray areas" that Primo Levi wrote about, and she also refers to him; these are not fixed categories from beginning to end. A bystander one moment can become a criminal perpetrator or a rescuer the next moment. Or remain an observer and do nothing.

She also describes the expansionary dynamics of the Nazis beginning in 1938, beginning with the Anschluss of Austria and then the annexation of the Sudetenland in Czechoslovakia. She also writes about the participation of the local non-Jewish population. I believe this is a very important theme. This includes the war with the Soviet Union and the occupation of Ukraine, etc. This is very important because these people played a large role. You have to be careful in describing the role of these people. In my view, this kind of articulation is correct.

Vasyl Shandro: What was most difficult for you, the co-editor of this book, to adapt in the translated Ukrainian version? Were there difficulties forcing you to consult on terminology and contexts?

Tetiana Borodina: I am very grateful for the very good work of Kateryna Dys, who masterfully translated this book. My biggest difficulties were creating a system of footnotes for readers since the author writes not just about events in Ukraine. For her, this is a survey work. For me and my co-editor, Mykhailo Tiahlyi, it was important to explain to readers aspects that are not customary for the Ukrainian audience: names of camps, when they existed. As Doris Bergen was writing for a Western audience that is more familiar with certain details, we felt it was worth explaining more for a Ukrainian reader, and we did this with a footnote apparatus. There were no difficulties with terms. The book is extraordinarily easy to read. It is aimed at a reader who is beginning to read on this topic. It is not over complicated. At the end is a list of sources for further and more detailed familiarization with the topics. We tried to make it easier for people to understand the text, which is not too complex, to begin with. I think this is a good book to read for non-humanities students, for humanities students who are not in history, and for all those who are interested in history and want to familiarize themselves with this topic in a fundamental way and understand the full spectrum of all these events. Of course, the book can't cover everything, but at least there are key and basic moments that are very important and that are connected with very interesting and very dramatic personal stories. This is Doris Bergen's book.

Vasyl Shandro: How is the book structured?

Tetiana Borodina: Chronologically. There is an introduction with an explanation of terms. This is followed by nine chapters that start with the fact that the Holocaust happened, why precisely the Jews [were targeted], the question of anti-Semitism, racism, modernity. Then there is the story of how Hitler came to power, the 1920s and 1930s, the end of the Second World war, and a list of important literature and films.

Vasyl Shandro: Do the photographs in the book carry more weight than simple illustrations that we are accustomed to seeing in books?

Tetiana Borodina: Absolutely. The author writes separately about them. With every new edition, she added more photographs. She said that she deliberately tried not to use ones that are already well known, photos that have become symbols — such as those of Anne Frank, barbed wire fences, or the gates of Auschwitz. She writes about this. She says people may immediately recognize these photographs and not be interested in reading further.  She said she deliberately chose unfamiliar photos so as to show the reader anew how the Holocaust was photographed and what a photograph is in times of genocide. Every photograph used is a separate story interwoven into the text narrative that the author provides in parallel. A synergy takes place, where readers receive a fundamental witnessing and visual sources for the analysis provided by the author.