Time of remembrance: the 80th anniversary of the Babyn Yar tragedy for Ukraine and Israel

Posted On: October 14th, 2021
Posted In: The Holocaust in Ukraine, History

The 80th anniversary of the Babyn Yar tragedy served as a highly symbolic pretext for the new Israeli president's visit to Ukraine.

The moral duty to remember the largest mass shooting in the history of the Holocaust and the entire twentieth century, as well as the necessity to raise a voice in protest from Jerusalem against Holocaust denial and the rise of global antisemitism — all this simply obliged Isaac Herzog to make his first state visit to Kyiv in October 2021.

Thanks to their president's visit to Kyiv, many young Israelis have "unexpectedly" discovered the "Holocaust by bullets." A segment of the Jewish public was surprised to learn that the Holocaust was not just Poland's Auschwitz or Holland's Anne Frank.

During his conversation with his Israeli counterpart, President Zelensky raised the topic of recognizing the Holodomor in Israel. President Herzog laid flowers at the monument to the victims of the Holodomor and told journalists: "I was impressed by this monument depicting a little girl holding wheat spikelets. Because of my family roots [his grandfather was the Chief Rabbi of Ireland — S.B.], I knew about the great famine in Ireland in the nineteenth century, but I had never heard about the Holodomor catastrophe in Ukraine."

The launch of a two-volume book of memoirs of Ukrainian Jews who were rescued during the Holocaust took place in Kyiv on the day of the visit. The Ukrainian-language publication, entitled My khotily zhyty (We Wanted to Live), was edited by Borys Zabarko, the head of the All-Ukrainian Association of Jews — Former Prisoners of Ghettos and Nazi Concentration Camps. 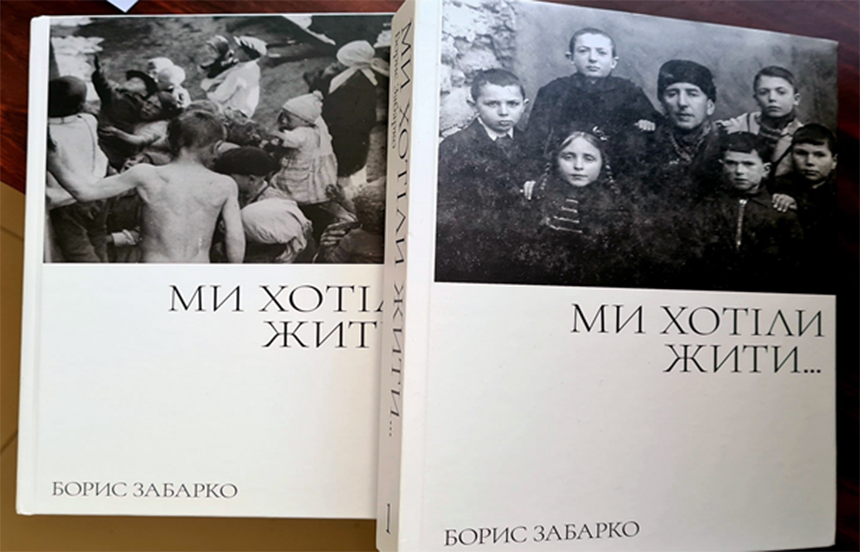 The spiritual leaders of Ukrainian Christians — the hierarchs of the Orthodox Church of Ukraine and the Ukrainian Greek Catholic Church — held memorial prayers in Babyn Yar together with the Chief Rabbi of Kyiv, Moshe Reuven Azman.

On these memorial days, I saw many Ukrainian pupils and students in Babyn Yar who came to this terrible place because they had begun to perceive the Jewish tragedy as their own.

On the days marking the 80th anniversary of the tragedy and the visit of President Isaac Herzog, the Ukrainian media devoted a lot of attention to the Babyn Yar topic. Television reports and newspaper articles, as well as discussions of the entire range of Holocaust topics and the role of Ukrainian Righteous Among the Nations, literally filled the media space.

The linkage of President Herzog's visit with the 80th anniversary of the tragedy led to a powerful surge of information in the Israeli media about Babyn Yar and the Holocaust on the territory of Ukraine. Every Israeli television channel and newspaper and all the biggest news sites produced long reports, including live broadcasts of the ceremony.

Regrettably, stereotypical assessments and old myths could not be avoided. Right in front of me, a colleague who was standing next to me — a journalist from the Israeli state television channel — said in Hebrew during a live broadcast of the commemorative ceremony in Babyn Yar that "in this place, the Jews of Kyiv were killed by German Nazis and Ukrainians." This and similar phrases not only demonstrate a low level of knowledge on the part of many journalists, but also underscore the importance of disseminating reliable information among Israelis about Ukrainian-Jewish relations.

The presentation to the presidents of Ukraine, Israel, and Germany of the Crystal Wall of Crying by the Serbian artist Marina Abramović triggered surprise and even criticisms from a number of visitors. From my point of view, the white crystals protruding from a gloomy, black wall reminded me of the fangs of some primordial monster and elicited a subconscious feeling of horror. Perhaps modern art requires some sort of special preparation in order to fathom the artist's idea.

Time of remembrance
When the Israeli-American cantor Joseph Malovany sang the Jewish funeral prayer "El Male Rachamim" (God Full of Mercy), many of those present had tears in their eyes, and his voice penetrated to the depths of one's soul. For the cantor himself, this was also very symbolic, as he was born on 30 September 1941 in Tel Aviv, on the same day that the Jews of Kyiv were being shot in Babyn Yar.

For the first time, Dmitri Shostakovich's Symphony No. 13 was performed in Babyn Yar by the German Symphony Orchestra conducted by Thomas Sanderling, who first conducted this symphony in Germany, at Shostakovich's request. The historic performance of this symphony, which was banned during the Soviet period, was a gift from the German government and, personally, from President Frank-Walter Steinmeier. 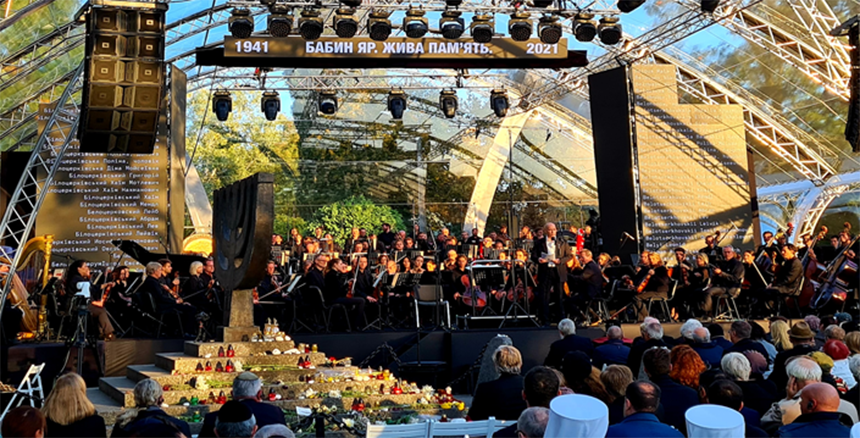 Viacheslav Feldman, the co-head of the civic organization Israeli Friends of Ukraine, wrote on his Facebook page: "It was my very great honor to introduce the Israeli friends of Ukraine at this event. For the entire time, there was a single thought in my head: When the German orchestra performs Dmitri Shostakovich's Symphony No. 13, based on Yevgeny Yevtushenko's poem "Babi Yar" in front of the large Israeli delegation and the president of Israel, this will be the best reply to the Nazis, their accomplices, and today's antisemitism. We survived! We won! We remember!"

The speech delivered by President Volodymyr Zelensky during the ceremony honoring the memory of the victims of the Babyn Yar tragedy, which was held at the National Historical Memorial Preserve, was replete with heartfelt human experiences and pain. 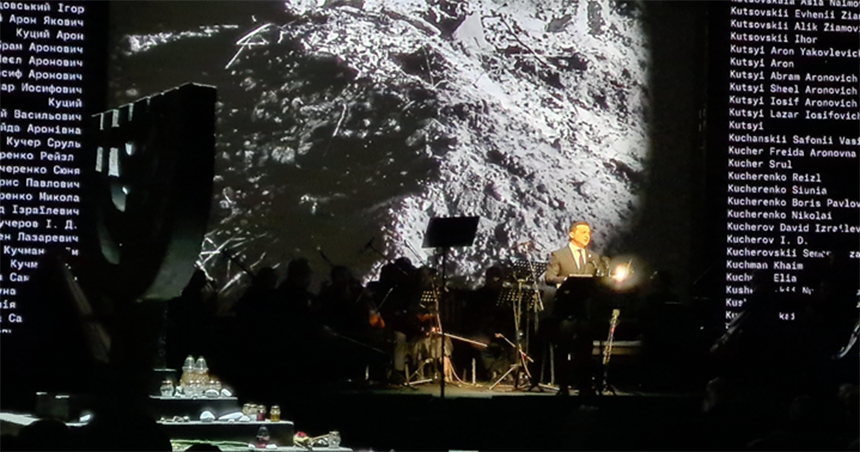 President Zelensky spoke about the need to learn as much as possible about the feats of Ukrainian Righteous. "We will always be a state in which the individual, not an ideology, will be the main value," he declared.

In his speech, President Herzog of Israel said that in the very heart of Jerusalem, on the government floor of the Israeli parliament, the Knesset, hangs a painting by the artist Yosef Kuzkovski, who was born in Ukraine and studied art in Kyiv. It is entitled Led to the Slaughter — Babi Yar. 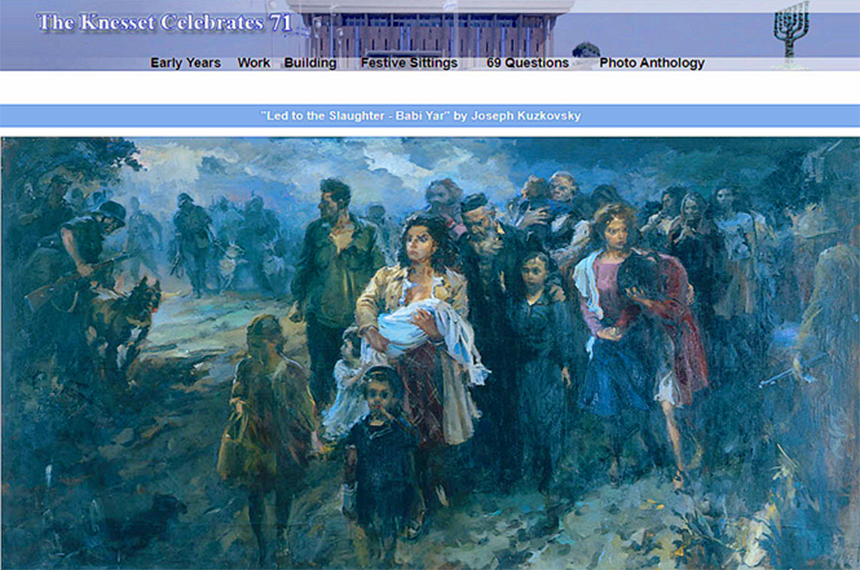 "I have walked up the stairs a thousand times and stopped next to it, shuddering inwardly. I have always shown this painting to world leaders visiting the Knesset and told them about the Babyn Yar tragedy — a story that we will be handing down to all the generations," said the Israeli leader.

"During the Holocaust, there was no more terrible killing by bullets than in Babyn Yar. For two days, Nazi extermination units, together — unfortunately — with local collaborators, destroyed thousands of Kyivan Jews. And I cannot rid myself of the thought that the sun was shining the same way above the ravine, birds were singing, the forest was silent, but the butcher was murdering," said Herzog.

"In this place, there were three stages of the tragedy: the erasure of a person, the erasure of records, the erasure of memory. The time of remembrance has arrived, and that is why we are here," the president of Israel emphasized. He thanked President Zelensky and the Israeli civic activist Natan Sharansky for their efforts to preserve the memory of the Babyn Yar tragedy.

A legendary figure
During the commemorative events in Kyiv, I was lucky enough to make the acquaintance of a genuine legendary figure: the 78-year-old member of the Academy of Sciences of Ukraine and distinguished biochemist Serhiy Komisarenko, who was the deputy prime minister of Ukraine for humanitarian affairs from 1991 to 1992, and the head of the organizing committee for the 50th anniversary of the Babyn Yar tragedy.

Within the government of Ukraine at the time, there were various ideas floating around, including the desire to mark the Babyn Yar date as quietly and modestly as possible.

"But for me, as a Ukrainian, it was important to mark the 50th anniversary of Babyn Yar on a higher level," Komisarenko noted in an exclusive interview for the Ukrainian Jewish Encounter.

Komisarenko was personally in charge of inviting foreign guests, including the brother of President George H. W. Bush; president of the Bundestag Rita Süssmuth; and the Israeli minister Zevulun Hammer. "We also invited the president of Israel, Chaim Herzog, the father of the current president Isaac Herzog. But he was unable to come."

The scholar and ex-deputy prime minister recounted that he himself prepared the text of Leonid Kravchuk's historic speech that he delivered on 5 October 1991 in Babyn Yar. "I insisted that the text also include not only a description of Ukraine's rich Jewish history but also an apology for the manifestations of antisemitism that had taken place in the past in the Ukrainian land."

Later, Komisarenko developed laws on national minorities and freedom of conscience. He was the prime mover behind the eviction of the Puppet Theater from the historic building of the Brodsky Synagogue and its transfer to the Jewish community of Kyiv. With his support, St. George's Cathedral in Lviv was transferred to the Ukrainian Greek Catholic Church.

Komisarenko was the first Ambassador of independent Ukraine to the United Kingdom and Ireland (1992–1998) and a knight of the highest orders of Ukraine. Today the distinguished scholar heads a committee on biosecurity and biodefense at the National Security and Defense Council of Ukraine.

Symbolically, back in 1991, Komisarenko received help in organizing those commemorative events from a young rabbi from the U.S. named Yaakov Dov Bleich. Their friendship, which crossed through Babyn Yar, has spanned 30 years and is still going strong.