Toronto Presentation of the new book “Don’t Tell the Enemy”

Prize-winning writer Marsha Forchuk Skrypuch unveiled her book Don’t Tell the Enemy in Toronto to an enthusiastic audience made up largely of young people on February 23, 2018.

Don’t Tell the Enemy is the story of a Ukrainian girl and her mother who hid three Jewish friends under their kitchen floor during the Holocaust in a Ukrainian town. This novel comes against the backdrop of Marsha’s hugely popular World War II Making Bombs for Hitler trilogy young people.

The book is inspired by the true story of Krystia Korpan, whose childhood in Pidhaitsi, Ukraine was a framework for the novel. Korpan was present at the event and received a standing ovation for the courage she showed during some of the darkest days of Ukraine’s World War II history. 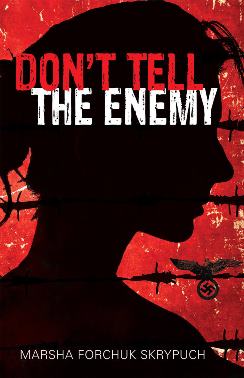 Forchuk Skrypuch has received many honors for her twenty-plus books. These include the Ontario Library Association Silver Birch Award twice, the Manitoba Young Readers' Choice Award, the Geoffrey Bilson Award for Historical Fiction for Young People, the SCBWI Crystal Kite Award, the Calliope Award for mentorship and excellence in writing from Humber School for Writers and was named a Canadian Ukrainian Woman of Distinction by the World Congress of Ukrainian Women’s Organizations.

In 2008, Forchuk Skrypuch was bestowed with the Order of Princess Olha by Ukraine’s president in recognition of her children's book Enough which was set during the Holodomor in Soviet Ukraine. Her book Adrift at Sea about Vietnamese Boat People was included in an exhibit for Pope Francis in Bologna, Italy last year.

Don’t Tell the Enemy is the first book in a new trilogy planned by Forchuk Skrypuch. Her books have been published in many languages and countries.

More information about the author is available at www.calla.com.