As in past years, the Ukrainian Jewish Encounter managed a well-attended information booth and sponsored a musical event with Ukrainian/Jewish content at the Ashkenaz Festival. This year the exuberant Lemon Bucket Orkestra was featured in a main stage performance.

The group was present throughout the festival and even led the closing parade. UJE also organized a panel discussion on Ukraine’s Maidan Revolution (the “Revolution of Dignity”), in particular from a Jewish perspective, and mounted a dual art exhibit entitled "Seeing Each Other and Ourselves."

Panel on the Maidan Revolution

The events on the Maidan (a central square in Kyiv) this past winter and developments since have focused world attention on Ukraine and the challenges it confronts to rebuild the state, while defending itself against a former imperial ruler determined to control it. The Maidan was the main stage in a drama of a people struggling to realize a pluralist and democratic future oriented towards European societal and governance values, in particular respect for the rule of law and human rights. The Maidan brought together in common purpose a very wide spectrum of the national community–Orthodox and Catholic Christians, Jews, Muslims, and others; Right and Left; young and old; educated and established, and common people.

The UJE panel at the Ashkenaz Festival examined the significance of the Maidan events for today’s Ukraine, for its various communities (including the Jewish community), for the diasporas, and more broadly for the future of the European project and the international order. Moderated by Yoni Goldstein, Editor-in-Chief of the Canadian Jewish News, the panelists included Professor Frank Sysyn, Director of the Peter Jacyk Centre for Ukrainian Historical Research at the Canadian Institute of Ukrainian Studies, University of Alberta; Rabbi Tina Grimberg, Kyiv-born leader of the Reconstructionist Congregation Darchei Noam in Toronto since 2002; Chrystia Freeland, a journalist and author of Ukrainian descent, and since November 2013 Member of Parliament for Toronto Centre; and Mark Marczyk, band leader of the multinational Lemon Bucket Orkestra. 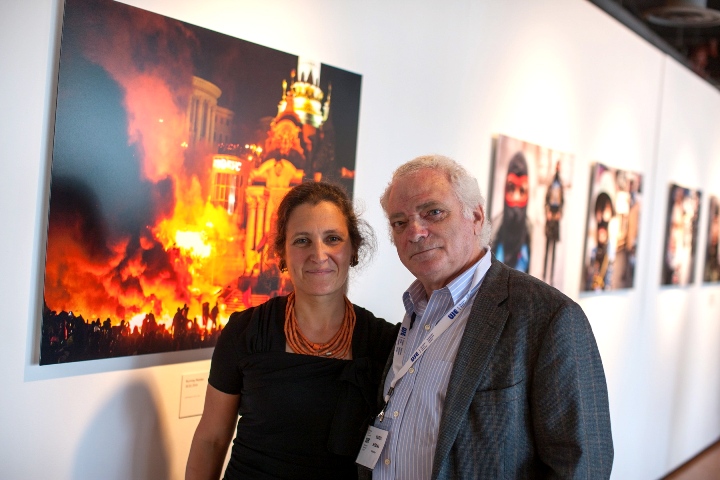 Canadian parliamentarian and UJE advisory board member Chrystia Freeland and UJE board member Berel Rodal during the 2014 Ashkenaz Festival.

Professor Sysyn delivered an introductory talk distinguishing between "nation" and "state"– the former referring to an ethnic group or a people, the latter to a civic society consisting of people of various ethnic backgrounds–and on how these terms apply to Ukraine. Since 1991 a generation has experienced living in a Ukrainian state, but this is now being challenged by Russia, which is claiming to represent and defend Russian-speakers in Ukraine when in reality they need no such protection. 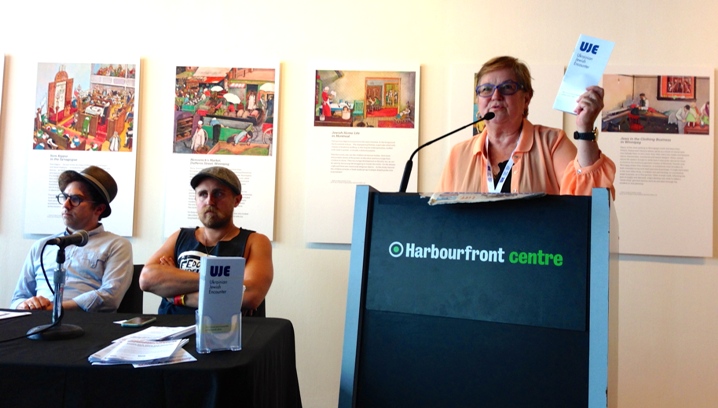 Rabbi Grimberg painted a dismal picture of being a young Jewish girl in Kyiv in the Soviet period, including an anecdote about how appalled she was when her grandmother spoke loudly in Yiddish in public. Her views on the impoverished and diminished state of the contemporary Jewish community of elderly and non-identifying Jews in Ukraine was challenged by an audience member, who pointed out that Ukraine today has the third (some say the second) largest Jewish population in Europe, a significant number of leading prosperous Jews (such as in Dnipropetrovsk), and the noteworthy, especially post-Maidan, phenomenon of those who proudly identify as "Ukrainian Jews." 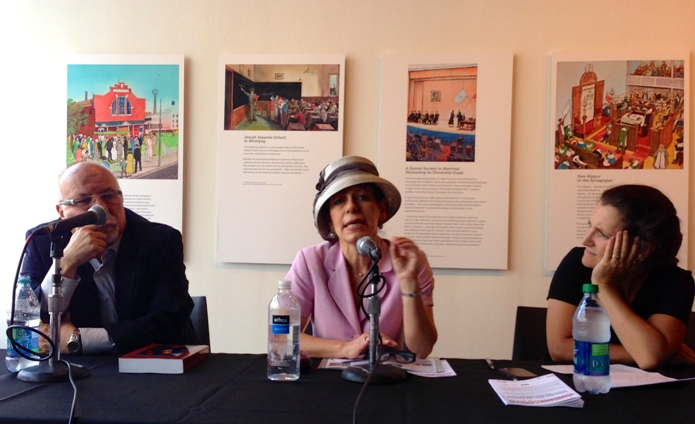 Chrystia Freeland cited Tim Snyder's observation that Ukraine is the best place now for a Russian to be–a fact that is widely recognized by the Russian intelligentsia. She also noted that the lines between Russian-speakers and Ukrainian-speakers in Ukraine today are very fluid and that there is no ethno-cultural struggle at play. She emphasized that the Maidan’s "Revolution of Dignity" was not just about individual freedom but also about individual responsibility and citizenship, and that Eastern Slavs, both Ukrainian- and Russian-speaking, were united against an autocratic regime which views national unity as threatening. 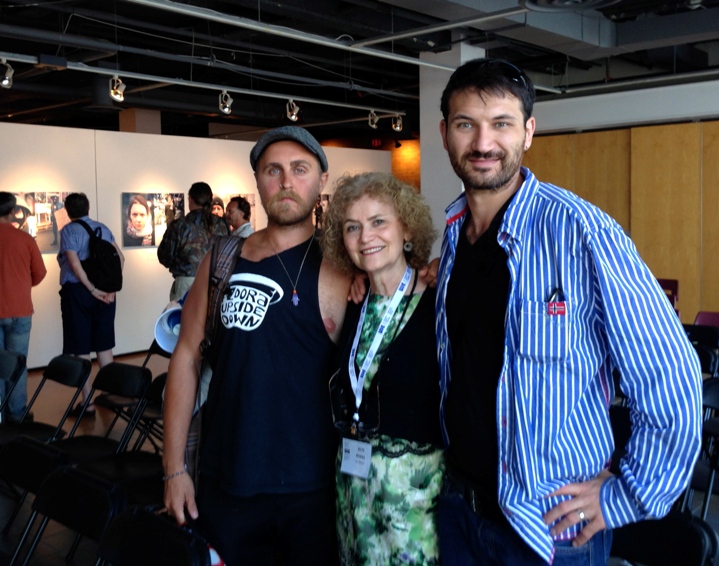 Mark Marczyk described his experience at the Maidan, where he observed respect across cultures, and where he performed with a band consisting of musicians from various countries that had recently experienced revolution. 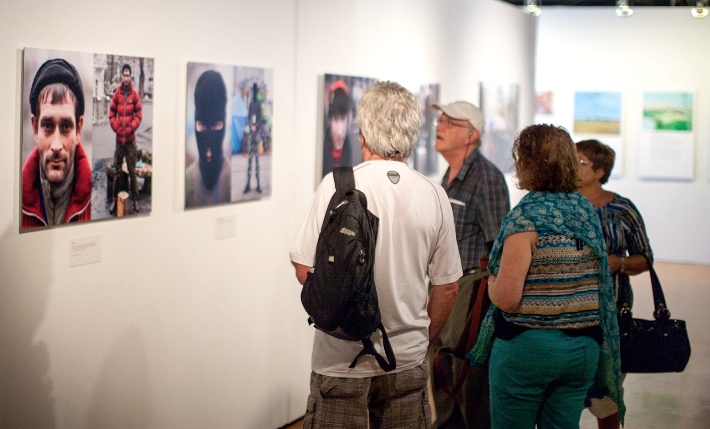 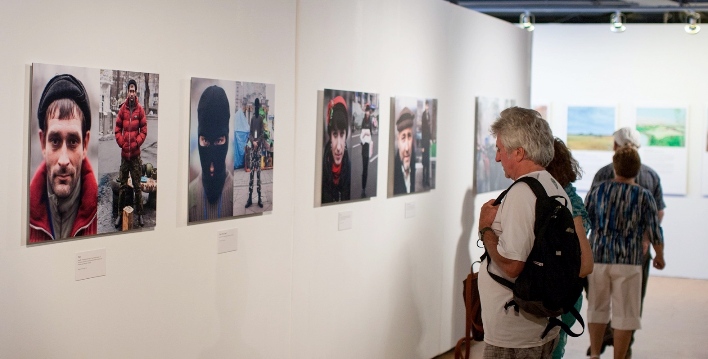 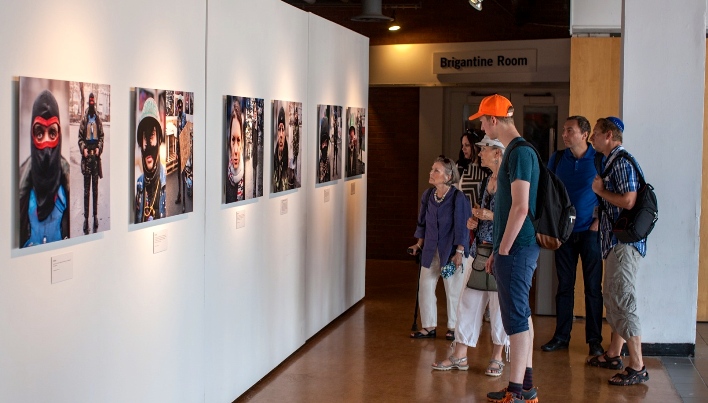 Visitors take in the “Eyes of Maidan” exhibit.

Regarding the role of Jews in relation to the Maidan events, the panelists agreed that the Jewish community is not monolithic and that there were diverse views, but that Jews in Ukraine as well as those abroad were largely and directly supportive of the Maidan Revolution.

The panel discussion took place in the Marilyn Brewer Gallery at Harbourfront, against the background of a dual exhibit mounted by UJE entitled "Seeing Each Other and Ourselves".

The exhibition Seeing Each Other and Ourselves

The exhibition consisted of two components: a series of paintings by the celebrated Ukrainian Canadian artist William Kurelek, through whose eyes we see vignettes of Jewish life across Canada, accompanied by his own description of the subject matter depicted in each work; and the "Eyes of Maidan" exhibit of photographs by the Israeli-Ukrainian photojournalist, Alexander (Sasha) Sherbakov, who looks into the eyes of the protesters in Ukraine’s Maidan revolution earlier this year and sheds light on their humanity and diversity. The underlying theme suggested in the umbrella title for the two components of the exhibit is that when we truly see each other, we better understand ourselves. 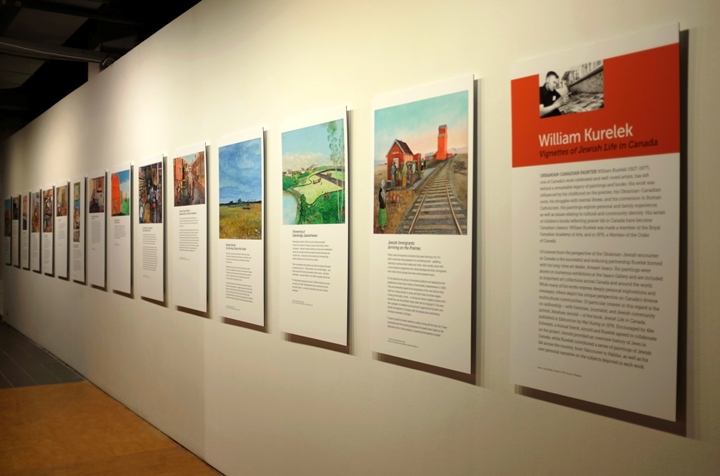 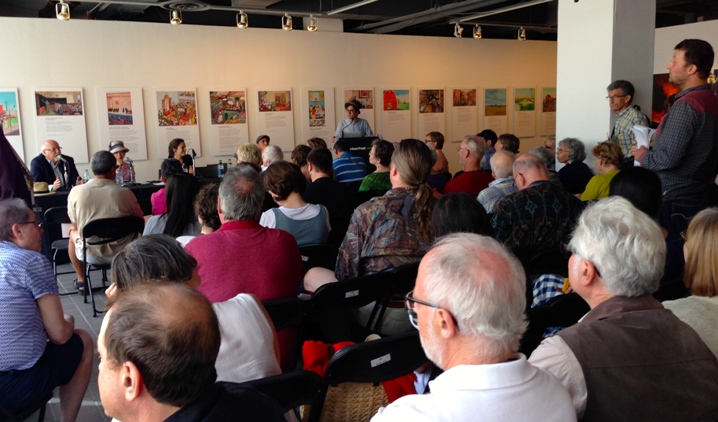 Yoni Goldstein, chief editor of the Canadian Jewish News, moderates the panel discussion “Ukraine’s Maidan Revolution: Birth of a Modern European Nation?” against the backdrop of the “Seeing Each Other and Ourselves Exhibit”.

William Kurelek (1927-1977), one of Canada’s most celebrated and well-loved artists, has left behind a remarkable legacy of paintings and books. His work was influenced by his childhood on the prairies, his Ukrainian-Canadian roots, his struggles with mental illness, and his conversion to Roman Catholicism. His paintings explore personal and family experience, as well as issues relating to cultural and community identity. Of interest from the perspective of the Ukrainian-Jewish encounter in Canada and for visitors to the Ashkenaz Festival is Kurelek's co-authorship–with historian, journalist, and Jewish community activist Abraham Arnold–of the book Jewish Life in Canada, published in Edmonton by Mel Hurtig in 1976. Arnold provided an overview history of the Jews in Canada, while Kurelek contributed a series of paintings of Jewish life across the country from Vancouver to Halifax, as well as his own personal narrative on the scenes depicted in each work. Images of these captivating paintings, juxtaposed with excerpts from Kurelek’s narrative descriptions, comprised the first part of the UJE exhibition at the Ashkenaz Festival. 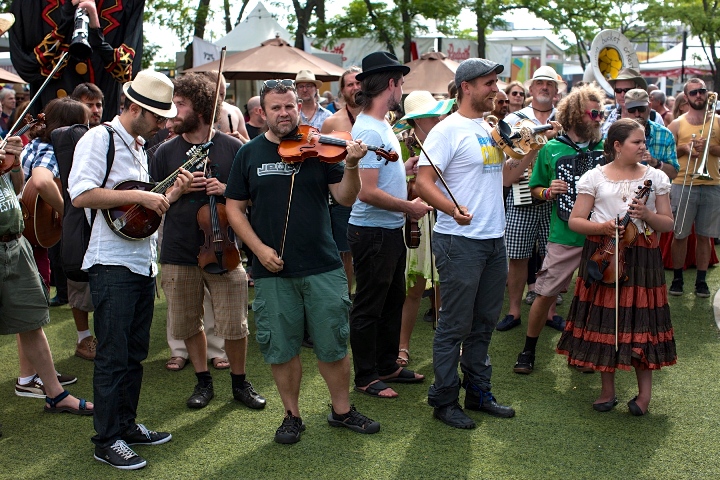 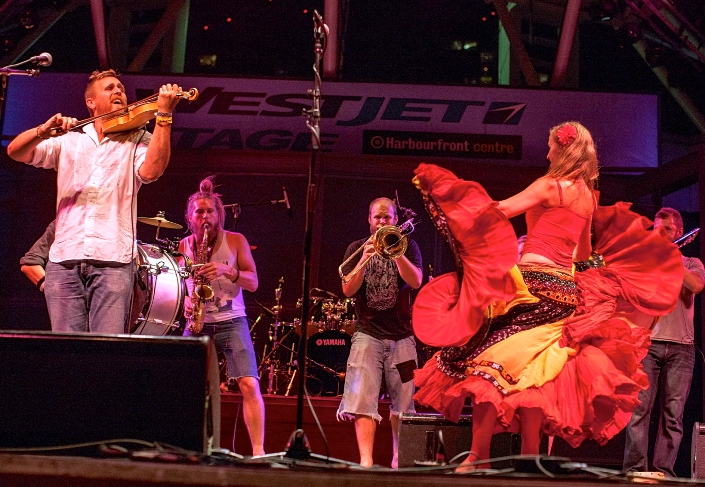 Festival goers danced up a storm during two performances by the Lemon Bucket Orkestra.

Alexander (Sasha) Sherbakov, born in Kyiv and living in Israel since the age of seventeen, has been applying his professional skills as a photographer to his patriotic commitment to both Ukraine and Israel. Last winter, he decided to spend several months on the Maidan to bear witness to and record the events, but also to ascertain whether there was any truth to Russian media claims that the protesters were antisemitic fascists. His exploration included spending time embedded with the various groupings present at the Maidan–including those from civil society, the Jewish community, and the more radical nationalists of Svoboda and the Right Sector. He also embarked on the "Eyes of Maidan" project to create a series of diptychs that combine two portraits of individual Maidan protesters–a full-length portrait and the eyes in close-up. The idea was to look into the eyes of those whom he approached to photograph and to gauge their reaction when he introduced himself as a photojournalist from Israel. Ironically, the childhood friend who originally suggested this concept to him later lost an eye during the violence in February.

Two curatorial talks were also given in conjunction with the dual exhibit. Halya Kuchmij–a film and television producer/director for thirty-five years, who is currently working on a feature docudrama on William Kurelek–provided fascinating insights into Kurelek's life and works. Alexander Sherbakov described his Maidan experience and how he was consistently treated with respect and friendship by the diverse community of people he met there. He shared his conclusion that the protesters were Ukrainian nationalists in the sense of being "patriots" but not at all “fascist-racists,” and that while there may be antisemitism in Ukraine, he did not encounter it on the Maidan.

All photographs courtesy of Alti Rodal

TORONTO – As fighting continues in Ukraine’s eastern regions, Israeli photographer Alexander Sherbakov is waging his own truth campaign. After spending over two months months on Kyiv’s Maidan earlier this year, Sherbakov is sharing his impressions through images taken during some of the most turbulent days of Ukraine’s modern-day history. He recently showed several Maidan photographs at Moscow’s famed Andrei Sakharov Museum and Public Center and this week wrapped up an exhibit of his Maidan portraits at the Ashkenaz Fesival at Toronto’s Harbourfront Centre. Read more...