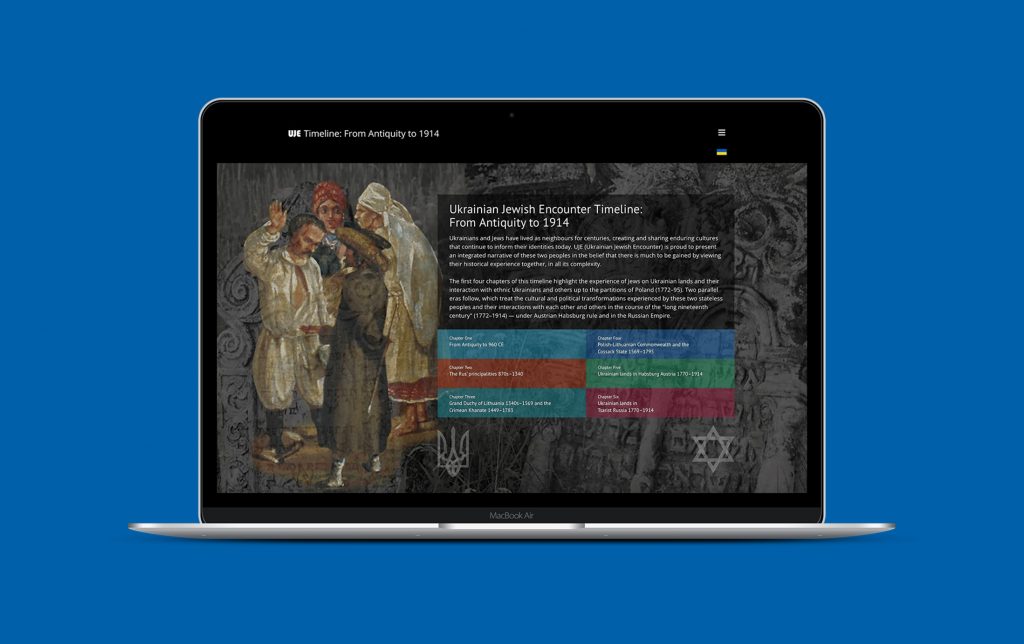 Ukrainians and Jews have lived as neighbours for centuries on the territory of Ukraine, creating and sharing enduring cultures that continue to inform their identities today.

The Ukrainian Jewish Encounter (UJE) is proud to present Part 1 of an integrated timeline of these two peoples in the belief that there is much to be gained by viewing their historical experience together, in all its complexity.

This Timeline takes the viewer on a journey from Antiquity to 1914, through the thousand-year encounter of Jews and Ukrainians, in a complex tableau of changing political regimes and intense interactions with other peoples. It is the story of the interwoven trajectories of two peoples, both committed to preserving their distinctive identities, neither of them self-governing during this period. It is a story that includes traumatic times, revolution, and war, reflecting and entrenching stereotypes and shaping memory. It is a story of long periods of normal coexistence and cross-cultural influences, giving rise to a vibrant Jewish culture on Ukrainian lands, side-by-side with the rich and distinctive Ukrainian culture.

We also hope that as Ukraine defends its very existence against Russia, which criminally invaded the country, the Timeline will serve to counter malicious and false narratives about Ukraine and its history. Ukraine is home to diverse peoples and, for centuries, one of the world's oldest and largest Jewish communities.

UJE is a Canadian charitable non-profit organization founded to deepen understanding of the breadth, complexity, and diversity of Ukrainian-Jewish relations over the centuries, with a view to the future. Its work engages scholars, civic leaders, artists, governments, and the broader public in projects and initiatives to strengthen mutual comprehension and solidarity between Ukrainians and Jews. As stated in UJE's motto: "Our stories are incomplete without each other."