Posted On: February 4th, 2021
Posted In: The Holocaust in Ukraine, History, Diverse Voices

The mayors of a number of cities in Ukraine issued statements on International Holocaust Remembrance Day (27 January 2021). The city managers of Kyiv, Odesa, and Lviv addressed themselves to this sad date, noting the specific features of the way the tragedy unfolded in their cities.

For example, Mayor Andriy Sadovyi of Lviv wrote the following on his Facebook page: “It cannot be forgotten that all the horrors of the Holocaust were not somewhere far away but here on our streets. This black page of world history cannot be turned over. We must talk about the Holocaust with our children and grandchildren in order to prevent this terrible crime from happening again.”

An idea put forward by Ihor Hrynkiv, the mayor of Zolochiv, a small raion center in Lviv oblast, rang out loud and clear against the backdrop of the statements issued by the mayors of Ukraine’s largest metropolises.

Mayor Hrynkiv posted this on his official page: “In leafing through the book of life of our peoples, let us remember the pain of our numerous losses. The Holodomor and the Holocaust—millions of innocent people were killed. May their memory be eternal! If we are speaking about the Jewish segment of the population of the Zolochiv area, we must always remember that, besides great Ukrainians like Markiian Shashkevych, great Jews were born here: Rabbi Moshe-Leib Erblich, the Hasidic tsadik; Naftali Herz Imber, author of the national anthem of Israel; Roald Hoffmann, winner of the Nobel Prize and honorary citizen of the city of Zolochiv; and many others.”

Hrynkiv not only called upon people to remember the past tragedies but also proposed a vector for a future partnership between Jews and Ukrainians: “For a great number of Jews and their descendants who live in various corners of the world, the Zolochiv area is and always will be theirs. And we will always welcome hospitably those who want to live and do good things here. As the mayor of Zolochiv, I invite the descendants of the Jews of Zolochiv not only to visit our city as tourists but also to become active partners in the development of the community,” the mayor emphasized.

In a commentary for the Ukrainian Jewish Encounter, sources at Zolochiv City Hall announced that the municipal government supports contacts with the descendants of Zolochiv Jews who are living in various countries, and is ready to offer them various advantageous programs for investments, including the allotment of plots of land on attractive terms.

According to my data, several thousand Jews in Israel, the US, and other countries are the descendants of Jews from Zolochiv. Before the German invasion in 1941, there were nine thousand Jews living in a city of sixteen thousand. By the time Zolochiv was liberated from the Nazis in 1944, fewer than a hundred Jews had survived, and most of them left Ukraine.

Today, Jews with roots in Zolochiv are, for the most part, the descendants of those who managed to immigrate in the 1920s and 1930s. An active community of Jews from Zolochiv existed in Israel until the 1970s. Today we can speak about the second and third generations of Jews whose connection to Zolochiv is based on the accounts of their fathers and grandmothers [sic].

The most famous Zolochiv Jew in the world is Professor Roald Hoffmann of Cornell University, the only Nobel Prize winner who survived the Holocaust on the territory of Ukraine. For many years he has maintained good relations with the city of his childhood and helped to establish a positive Ukrainian-Jewish dialogue.

During the municipal elections held in October 2020, Hrynkiv received public support from Roald Hoffmann. The American academic recorded a special video message to the residents of Zolochiv, in which he emphasized Hrynkiv’s efforts to preserve the city’s multinational, historical heritage.

Hrynkiv obtained 57 percent of the vote, winning the 2020 election and becoming the first Ukrainian mayor to be supported by a Nobel Prize winner.

The mayor of Zolochiv met with Alti and Berel Rodal, representatives of the Canadian charitable non-profit organization Ukrainian Jewish Encounter, who presented Hrynkiv with books on the history of Ukrainian-Jewish relations. 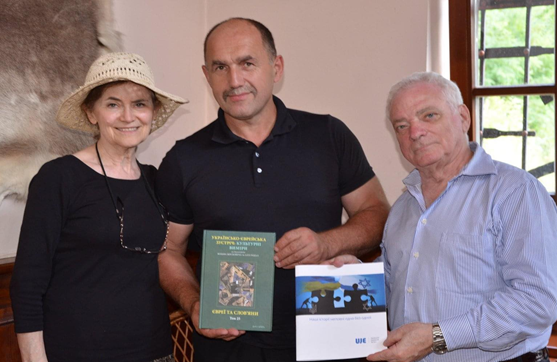 In July 2018 Hrynkiv took part in the first remembrance ceremony in seventy-seven years, which took place next to the walls of Zolochiv Castle, the site of a mass grave of Jews who were killed during a pogrom in July 1941.

Previously, Hrynkiv, who became mayor in 2010, helped a group of Israeli and American descendants of Zolochiv Jews to tidy up the huge expanse of the Jewish cemetery and to install a marker. A commemorative plaque was installed on the house where Roald Hoffmann was born.

There is still a considerable number of problems concerning the memorialization of structures associated with the Jewish legacy in the city: the site of the ruined Great Synagogue remains in a state of neglect and is still unmarked. There are no memorial markers on the territory of the former ghetto or the site of the mass grave of the victims of the anti-Jewish pogrom located near the walls of Zolochiv Castle.

Of course, quite a few of these problems are rooted in the lack of state funds. But it is encouraging to see that the city manager intends to resolve these problems in stages.

There is no exhibit in Zolochiv Castle about the Jewish heritage of Zolochiv. The permanent exhibition is devoted solely to the prisoners of the NKVD prison that was located in the castle; there is not a word about the fact that the Jews of Zolochiv were killed. Unfortunately, there are some “regional historians” in the city who seek to diminish the number of Holocaust victims or who generally deny that an anti-Jewish pogrom took place on 3–5 July 1941.

On the whole, it may be said that this ancient Galician city is just beginning to grasp how great a contribution the Jewish community made to the development of Zolochiv.

In six months, it will be eighty years since the beginning of the tragic events of the Holocaust in this city. Perhaps this sad date will serve as the occasion for events and projects connected not only with an understanding of the tragedies of the city’s past but also with a discussion of the potential for the future development of Zolochiv.