Ukrainian Righteous Among the Nations: Mariupol and Kherson

Posted On: October 6th, 2022
Posted In: The Holocaust in Ukraine, History 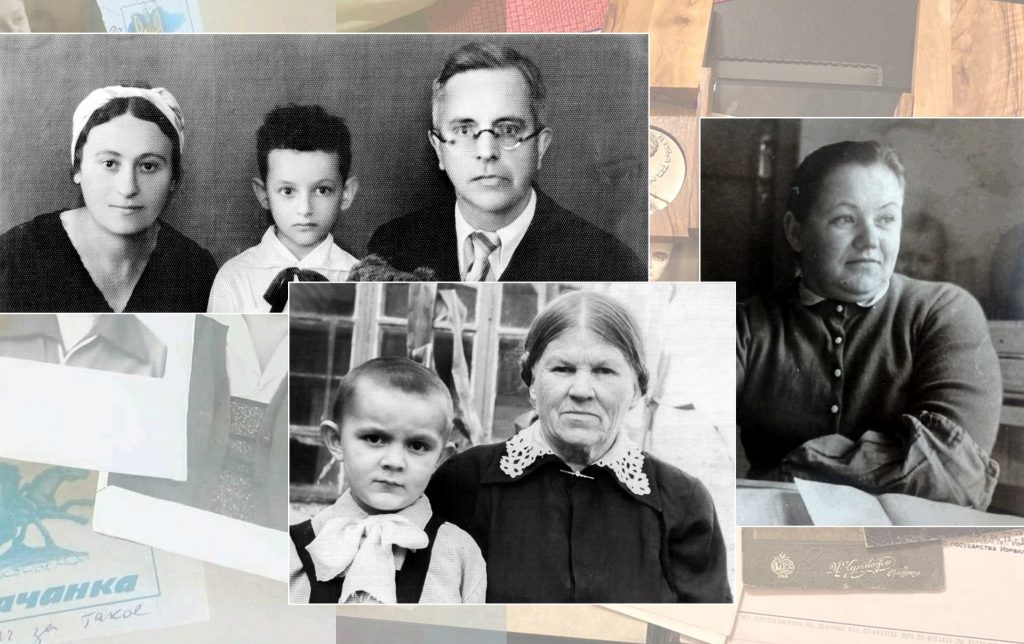 We continue our series of publications dedicated to the Ukrainian Righteous Among the Nations. We will now look at those saviors of Jews who come from cities affected by the ongoing Russian invasion.

Mariupol
Mariupol, a city in the Donbas region in Ukraine founded in the 18th century, has become a modern synonym of tragedy and brutality associated with nearly total extermination. With almost half a million population, Mariupol is now largely a ghost city, destroyed by the Russian army in the spring of 2022. Among the victims are many Jews, including a religious Jewish community led by Rabbi Menachem Cohen, envoy of the Lubavitch Rebbe. Its members have now found refuge in various cities and countries worldwide.

The Yad Vashem Holocaust Remembrance Center portal mentions 30 Righteous Among the Nations who saved Jews in Mariupol. One of them is Anastasiya Fomina.

She moved to Kyiv, fleeing from the Holodomor in the Donbas. She was an uneducated, simple, and very decent woman. In Kyiv, she was recommended to the Kats family, which had two small children, but the mother had died. Anastasiya Fomina started working in the Kats family as a nanny.

In the fall of 1941, Anastasiya Fomina and three-year-old Tsezar Kats could not evacuate from the Ukrainian capital. They returned to their apartment on Kostelna Street.

"The evacuation train stopped near Nizhyn and stood there for a very long time as it had to yield to trains carrying equipment evacuated from factories. Many people even ran out of food, so many managed to go to Kyiv for groceries and return to the train. My grandmother told the nanny to also go to Kyiv, because the Kats family was running out of foodstuffs. The nanny obliged and took little Tsezar along," said Tsezar Kats, who was given the name Vasyl Mykhailovsky.

According to his story, on 28 September, his father, a military man, returned home, was arrested, and was never seen again. On the morning of 29 September, the house custodian ordered her to take little Tsezar to Babyn Yar. Fomina took along her passport, which stated that she was Ukrainian.

Someone from the [police] cordon picked them up and let them out of the death march to Babyn Yar.

This is what the Yad Vashem Holocaust Remembrance Center website tells about Anastasiya's deed: "As they neared Babyn Yar, Fomina heard shots and realized that the Jews were being murdered there. She ran off with Tsezar, and the two of them wandered the streets of the city for a few days, visiting friends, and sleeping in the bombed-out remains of buildings. One day, Fomina heard about a new orphanage. She took Tsezar there, attached a note to him that said that his name was Vasya Fomin, rang the bell, and disappeared." In the orphanage, little Tsezar was saved by Nina Gudkova, whose story will be featured in our series later.

After the war, the Kats family was able to find Tsezar thanks to contact with Anastasiya.

Our second story is about the Oleinichenkos, the Righteous family from Mariupol.

According to the Yad Vashem portal, Polina Oleinichenko, her husband Akim and their two adult children, Viktor and Valentina, lived in Mariupol.

"Oleinichenko was a seamstress, Akim and Viktor worked in a factory, and Valentina was at school. On October 24, 1941, one of Oleinichenko’s clients, a Jewish woman married to a Ukrainian, brought her eight-year-old nephew, Benyamin Boriskovskiy, to her home. Days earlier, on October 20, Boriskovskiy, along with his parents and most of Mariupol Jewry, had been taken to Agrobaza, on the outskirts of the town, to be killed. Boriskovskiy had fallen in the death pit and lost consciousness. That night, when he awoke, despite being injured in his leg and shoulder, Boriskovskiy managed to clamber out of the pit and by morning, he reached the home of his aunt, who took him to Oleinichenko. The Oleinichenkos agreed to hide the Jewish boy in their home, and they told their neighbors that he was a relative. Before long, Oleinichenko managed to procure a birth certificate in a Ukrainian name for Boriskovskiy, but she still did not permit him to stroll in the streets and whenever there were house searches, he was hidden under some straw in the yard. In the winter, when the hiding place in the yard was too cold, the Oleinichenkos built a hiding place for him inside an old piano, where he hid whenever outsiders came to the house. The Oleinichenkos did not leave Boriskovskiy alone for even one day during his entire stay with them, and it was predominantly Valentina or Viktor who spent time with him."

In 2021, one of the friends of the Word of the Righteous project, Ukrainian businessman Viacheslav Cherniakhivsky, saw Yad Vashem medals, a certificate issued to the Oleinichenkos, and an archive of documents (family photos) at an online auction. We do not know why the decision was made to sell these items, how they got to the seller, or whether this person is a member of the Oleinichenko family. In any case, the Word of the Righteous project appealed to the public, asking them to help buy Yad Vashem medals and certificates. Sergey Budkin, an investment banker who lives in Australia and works with Ukraine, and the director of the Babyn Yar National Historical and Memorial Reserve Rosa Tapanova purchased these artifacts. "The heroic deeds of the Righteous must be treated with respect and honor. We must not forget the faces of the heroes and what they did. Medals are an act rather than a thing. We now see how the aggressor is falsifying history and facts and how the ‘Never again’ motto we kept saying has returned," says Roza Tapanova. The photographs, medals, and certificates of the Righteous Oleinichenko family are now kept in the Babyn Yar National Historical and Memorial Reserve."

Kherson
On 2 March 2022, the Ukrainian city of Kherson, home to more than 270,000 people, was occupied by the Russian troops advancing from the Crimean Peninsula. As I write this text in early September 2022, the Kherson region has become the theater of the fiercest fighting since the end of February 2022. The Ukrainian army is heroically repelling the Russian invasion and recapturing Ukrainian lands.

According to the Jewish Confederation of Ukraine and Yad Vashem, a total of 17 Righteous Among the Nations lived in the Kherson Region.

Maria Prutska [Prutskaya] is one of the last Righteous women from that region who was still with us in early 2022. Together with her mother Yekaterina, she saved two Jewish boys, Oleg and Vladislav Plotkin. According to Maria Prutska, the mother of the rescued boys was friends with her mother. At the beginning of the occupation, the fighters from the so-called Russian Liberation Army (the Vlasov army) once spotted these two Jewish boys in the yard and brought two young German officers. The Vlasov men pointed their fingers at the boys, saying that they were Jewish so that the officers would kill them. The Germans looked at them and left without doing anything.

The boys' mother saw the whole scene and almost went crazy, so she called for help. Yekaterina and Maria hid and fed the boys throughout the war. Their father returned from the front immediately after the war and came to pick them up.

The Word of the Righteous project and other charitable organizations have been in contact with Maria Prutska in recent years. She buried her adult daughter several years ago and lived alone. A nephew living nearby helped her. She has always been interested in how the deceased Jews are commemorated in Ukraine and has spoken about her visit to Babyn Yar, asking to be informed of all new developments.

On 24–25 February 2022, several Israeli organizations, including Johnny Daniels’ From the Depths and the Israeli Embassy, simultaneously offered Maria Prutska help in evacuation to Poland or Israel, but she refused. In recent years, she could hardly walk on her own without a wheelchair, and it would have been a hard test for a woman in her 90s. I last spoke to her on 25 February 2022.

The Russians occupied Kherson on 2 March, and contact with Maria Prutska was lost in early March. Julia Goldenberg, the head of the 2U Charitable Foundation, which supports the Righteous Among the Nations, says: "It's terrible to realize that this war has not spared anyone. Our 2U Foundation has taken care of the Righteous living in different parts of Ukraine for many years. Needless to say, they especially need our help and care now, so we are doing everything we can to support them. However, we are unable to do so in the temporarily occupied territories. One of the Righteous women we have always cared for lives in the Kherson region. Since the beginning of the occupation, we have had no contact with her and have been unable to send her medicine, foodstuffs, and detergents. It breaks our hearts to think about her conditions and what she is going through now. We are absolutely helpless in this situation and cannot do anything.

“We can only hope that there are caring neighbors supporting the old woman who risked her life to help others 80 years ago.

“It would seem that the Righteous who are over 90 years old and survived a terrible war should live with dignity and in love. But the ‘liberators’ have appeared.”

Currently, we have fragmentary information about Maria Prutska. There is hope that she is alive.

Righteous Street: How Ukrainian cities honor the Righteous Among the Nations (part 2)

Ukrainian Righteous Among the Nations and war: how the aggressor tries to erase history

Translated from Ukrainian by Vasyl Starko.