When the word kills or saves 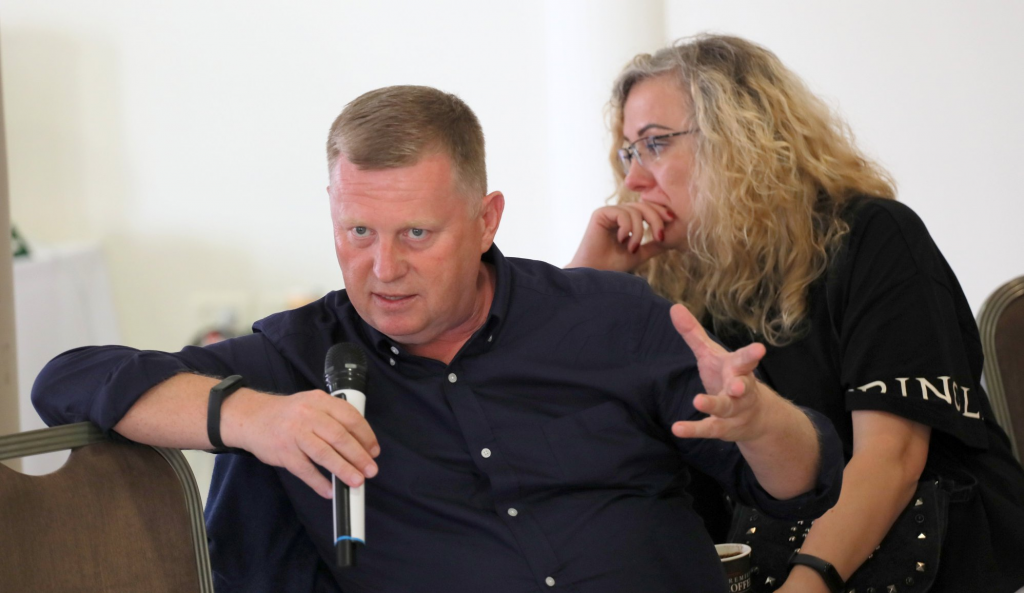 The international seminar “When the Word Kills or Saves: Church Leaders, Intellectual Authorities, and the Press during the Holocaust and the Holodomor” was held in the Israeli city of Acre in November 2019.

For the fourth year in a row, the Israeli Friends of Ukraine NGO, with the support of the Canadian philanthropic organization Ukrainian Jewish Encounter and the Ukrainian Embassy in Israel, have been successfully conducting a series of Ukrainian-Israeli seminars to discuss acute problems and tragic pages in the history of Ukrainian-Jewish relations. Moreover, every year interest in this issue is growing and the number of participants and spectators of these discussions is expanding.

The main theme of the 2019 event was the role, complicity, and responsibility of ideologists, religious and intellectual leaders, as well as the media (and mass propaganda) in two tragedies of the 20th century—the Holocaust and the Holodomor.

The selection of such topics for this forum was dedicated to the 75th anniversary of the death (1 November 1944) of an outstanding Ukrainian of the twentieth century—Metropolitan Andrei Sheptytsky of the Ukrainian Greek Catholic Church. The dialogue in Acre took place in an atmosphere of free and honest discussion of the most painful problems of Ukrainian-Jewish history.

Dr. Anatoly Podolsky, head of the Ukrainian Holocaust Studies Center, talked live via Skype from Kyiv about Orthodox priests and rabbis during the Holocaust, their reactions to genocide, the rescue of Jews, and forms of resistance to Nazis by religious leaders.

Dr. Vasyl Rasevych (Center for Urban History of East-Central Europe, Lviv) made an in-depth analysis of the role of the Catholic Church, Polish nationalism, and religious antisemitism in the preparation and implementation of the Holocaust in Western Ukraine. The Lviv historian spoke about the ambiguous position of the Ukrainian Greek Catholic Church between collaboration and the rescue of Jews. Rasevych also raised a heated topic about "killer words," including the use of the word "Zhyd" in Ukraine.

Dr. Lyudmilla Hrynevych (Kyiv), Ukraine’s renowned expert on the Holodomor, presented a deeply reasoned report on hate language in Soviet propaganda and in the press on the eve of the Holodomor. She explained how the image of the main enemies—kulaks and religious figures—was formed and how they were demonized and dehumanized.

Hrynevych highlighted the topic of Ukrainian-Jewish relations during the Holodomor, including facts of solidarity and Jewish support for starving Ukrainians, as well as the latest research on the Holodomor.

Discussing the Hrynevych presentation, seminar participants noted the similarity of language ​​in the propaganda of the two totalitarian regimes: a1930s Soviet film on “kulaks” compared these people with dangerous insects, just as a 1940 Nazi film compared Jews to rats and parasitic insects.

The historian Yuriy Radchenko (Center for the Study of Interethnic Relations of Eastern Europe, Kharkiv) touched upon the theme of the (Andrii) Melnyk wing of the Organization of Ukrainian Nationalists (OUN) in the Holocaust at the seminar, talking about how ideologists, leaders, and the press of the Melnykites collaborated with the Nazi regime and participated in one form or another in the genocide of Jews.

Shimon Briman (University of Haifa), in a presentation based on German documents, showed the Holocaust at a micro level through a tragedy in the city of Bila Tserkva, where German priests and a Wehrmacht officer unsuccessfully tried to prevent the execution of ninety Jewish children. In a second report, Briman spoke about the role of the U.S. media that hid real-time Holocaust information.

Rabbi Gregory Kotlyar (Israel) raised the philosophical problem of religious faith after the Holocaust and presented a wide range of opinions of various Jewish thinkers.

A heated discussion took place at the seminar around the personality of Metropolitan Andrei Sheptytsky against the backdrop of the Holocaust. According to the general opinion of Israeli participants, Andrei Sheptytsky is worthy to receive the title of “The Righteous Among the Nations,” and efforts to influence the Yad Vashem Memorial Institute should be continued in order to confer this title on Sheptytsky.

One of the practical results of the Acre event was a direct dialogue between academia and cinema. The Israeli director, actor, and producer Dim Amor, who is preparing to shoot the first Hebrew-language film about the Holodomor, agreed to academic consultation with Dr. Lyudmilla Hrynevych.

Vyacheslav Feldman, co-chairman of "Israeli Friends of Ukraine," organized the broadcast of all sessions of the seminar live via Facebook. Videos of the talks will soon be posted on YouTube. The broadcast dramatically expanded the audience. Data showed more than two thousand people watched the speeches and panels at the seminar in Acre.