When you read Lesia Ukrainka, often you cannot figure out if the text is about Jews or Ukrainians—Myroslav Shkandrij

How have Ukrainian writers from the nineteenth to the twenty-first century described Jews? Can one track certain trends?

We spoke about the image of the Jew and the depiction of the Jewish community in Ukrainian literature. Our guest was Myroslav Shkandrij, a literary historian, art specialist, and professor at the University of Manitoba (Canada). He is the author of the study Jews in Ukrainian Literature: Representation and Identity. 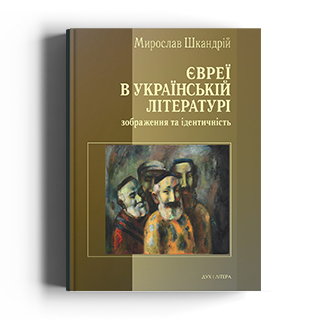 Vasyl Shandro: To what extent is the image of the “other” present in Ukrainian literature?

Myroslav Shkandrij: There were certain stereotypes of Jews, which were formed in the nineteenth century, particularly the depiction of Jews in literature: in Istoriia Rusov, in dumas [lyrical-epic works of folk origin about events in the Cossack period of the sixteenth to seventeenth century], and in the works of such writers as [Mykola] Kostomarov and [Panteleimon] Kulish. The key and best-known stereotype is that of a Jew who holds the keys to a church and does not let Ukrainians attend Mass.

When Ukraine left Poland and become part of the Russian Empire, people in the Kyiv region, the former Cossack lands, were perturbed by the presence of a great number of Jews. This stereotype appeared precisely as a result of the influence of this unease at the presence of Jews. First in Istoriia Rusov, then in Gogol, and then in the dumas.

One must exercise caution when speaking about the authenticity of these reproaches. A researcher at the Hebrew University of Jerusalem discovered entries in historical documents about cases where Jews did close churches. But what is important here is that all churches and synagogues were closed if the land was not paid for. In the antisemitic or anti-Jewish tradition, these additional facts were irrelevant. One had to say that the Jews were to blame.

Vasyl Shandro: How important and visible in this question is Taras Shevchenko as a writer?

Myroslav Shkandrij: The departure from the stereotype begins in fact with him. Questions always arise about his poem “Haidamaky.” But if you read this brilliant work closely, you can see that there are many depictions of Jews. The work is much more complex than many people think.

The depiction of the Jew changes throughout the poem, and by the conclusion, a sympathy for him returns. After reading this work carefully, you get an entirely different impression of Jews. The same can be said of his poem “Maria.” Overall, his attitude to the Bible, to Jewish topics, is much more complex than it may seem to people.

Vasyl Shandro: Where did the idea that Shevchenko was an antisemite arise?

Myroslav Shkandrij: I think that this comes from an inattentive reading of his works. In Shevchenko’s works, there are statements that can be taken out in sections. Voices change in his poems; at times, he conveys anti-Jewish views, but they are uttered by characters, not the author. An inattentive reading gives reason to think that this is said by Shevchenko himself as an author and writer.

There have been attempts to prove that Shevchenko was an antisemite, but this is slander to a great extent. Russian chauvinists have tried to enlist Shevchenko to their camp.

Vasyl Shandro: Is there a significant difference in the portrayal of Jews by Galicians and by people from central Ukraine?

Myroslav Shkandrij: There were more Jews in Galicia and in the west of Ukraine. During the period of early modernism, between the 1880s and the 1917 Revolution, nearly all of Ukrainian literature reconfigured itself to philosemitic moods. This is connected with the struggle for equality and for the right to publish in the Ukrainian language. Consequently, Jews and Ukrainians became allies in this struggle.

Theater played a big role because it was not possible to publish much, but it was possible to stage performances. A lot of interesting things were staged in villages and small towns, where there was a mixed audience of Jews and Ukrainians. A tendency emerged to stage plays that would be interesting to both the Jewish and the Ukrainian public concurrently. Let’s recall [Mykhailo] Starytsky or [Marko] Kropyvnytsky.

The profile of the Jew begins to change in plays. The depiction of [Oleksa] Dovbush, which exists in Ukrainian and Jewish folklore, is immensely popular. Ukrainians and Jews from Dovbush’s milieu helped each other; this is portrayed in several plays.

When I was researching these plays, I was amazed to find that they were popular among the Sich Riflemen [the only Ukrainian unit in the Habsburg Austrian army, organized in Galicia in 1914—Trans.]. The Riflemen community staged and supported them. These plays were performed in Ukraine and Canada. Our research shows that in various Riflemen communities, these plays were extraordinarily popular.

And in Ternopil, there was a Jewish Battalion that fought for Ukraine together with the Riflemen.

Lesia Ukrainka opted for a biblical theme. For her, the Jews were a people who had suffered since time immemorial and was still suffering. She draws an analogy to the Ukrainian people. When you read Lesia Ukrainka, often you cannot determine if the text refers to Jews or Ukrainians.

Ivan Nechui-Levytsky does not stray too far from certain stereotypes. Nevertheless, in his works, there is a struggle among differing views of Jews. The same can be said of Panas Myrny. Both of them stood on the side of the Ukrainian people, of the peasantry. Often, they encountered unfriendly Jews, who were in charge of some piece of land. They often also depicted a Jewish tavern-keeper. There are also positive Jewish heroes who rendered assistance to a landowner but treated Ukrainians well. Nothing is as simple as it seems.