Who was Fabergé’s Kyiv competitor? A regional historian reveals all. 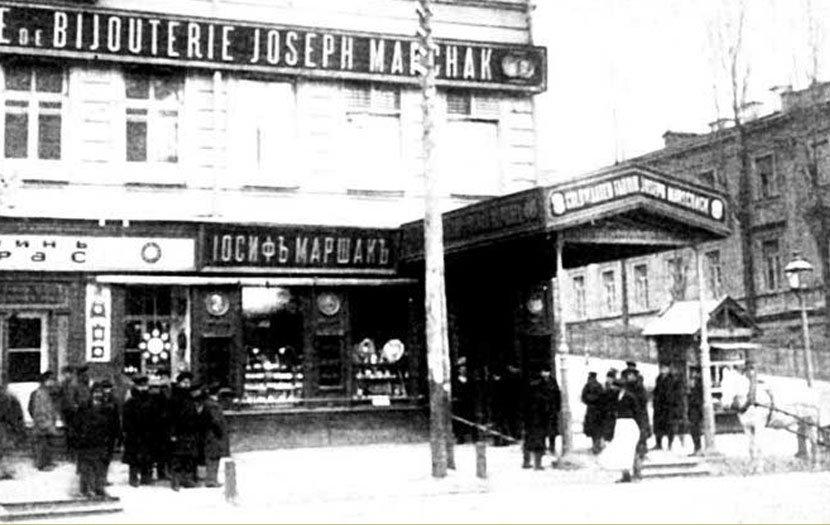 Together with Olena Bezruk, we learn how Joseph Marshak went from owning a small atelier in the Podil district to creating a jewelry empire.

The second half of the nineteenth century was an era of great changes in the Russian Empire. After the reforms, the mighty state opened up to Western technology and capital. Big businesses began to appear in the country. The coal industry, railways, and metallurgy soon began producing tycoons. But the main hero of this podcast was occupied with something else. On the eve of the Revolution, Joseph Marshak’s factories produced more than half of all the gold jewelry in the empire’s Ukrainian gubernias. The regional historian Olena Bezruk revealed how a small-town Jewish boy managed to create a successful business.

Olena Bezruk:  This is probably one of those wonders that happen in Ukraine. This is not the only such case. The time about which we are speaking, from the mid-nineteenth century to the beginning of the twentieth, is a period when many changes took place in Kyiv. The city was home to famous people, and world-class musicians came here. At the same time, the people who were coming to the city were reaching such summits that perhaps could not be reached in other eras. Chicago, for example, developed, the same way. At the age of fourteen, Marshak, who was from a poor family, knew that he would grow up to be a jeweler. That is, he didn’t simply think, I’ll find something for myself in the big city. He settles down expressly in the Podil district [of Kyiv] and learns this craft.

Andriy Kobalia:  Marshak came from a Jewish family. Kyiv was part of the Pale of Settlement, but the gubernia itself was not. How did he end up in the city?

Olena Bezruk:  He studied. At the time it was permitted to reside in Kyiv with this status. Furthermore, if there was a student in the family, then the family members, too, could live in the city. One woman lived here for quite a long time, while her daughter was studying at a music school. Then it turned out that the daughter was four years old. In other words, many tried to circumvent the law.

Marshak got married quite early. Everything that he touched turned to gold. At the start, he took a hundred rubles from his wife for the first chain that he was supposed to make by himself. But it was not enough, so he sold his only suit. And literally within a few years he already had his own shop on Khreshchatyk Boulevard. It sounds very solid. In reality, these were two small rooms in a building owned by a Swiss watchmaker named Wehrle, who agreed to lease the premises. This was a very good marketing move!

Andriy Kobalia:  Because the public that repairs watches is the same that buys adornments.

Olena Bezruk:  Yes! These are the same people. Wehrle has a nice clientele, there are wealthy people among them. And Marshak has good taste, and the things that he creates are unlike anything else. It was impossible simply to go past the shop without looking at these adornments. And gradually Wehrle’s entire clientele becomes Marshak’s.

Andriy Kobalia:  How did they become acquainted?

Olena Bezruk:  Unfortunately, I didn’t find any references to this. But I think that this a pretty good advertisement for the Swiss man, too. A watchmaker and a jeweler, why not? He was a young and focused youth.

Andriy Kobalia:  When we read Marshak’s biography, we see the chasm between the boy, who has his own room in the watchmaker’s building, and the jeweler, whose creations were purchased by the imperial family.

Olena Bezruk:  This did not happen in the space of a single day, although during the first four years of the atelier’s existence they designed jewelry weighing a total of seven pounds. This is more than three kilograms. Twelve years later, in 1896, Marshak’s business produced a total of seven poods of gold jewelry in the space of that one year; this is more than 120 kilos. For a long time, he worked alone; he did not always have helpers. His wife helped him a lot. And there is another important aspect: In our city, there was not a single person that had achieved something and treated his workers badly. The same may be said of the Tereshchenkos, the Kharytonenkos, and the Brodskys. The successes of these people were the achievements of the people who were working for them. The Brodskys and Tereshchenkos said: I give not because I want to, but because I realize that I must. If you want to have your own professional people, you must have proper relations with them.

Andriy Kobalia:  It is important here to understand the context. In the Russian Empire, working conditions were not the best in those days. Factory workers, including children, could spend between ten and twelve hours at work. The same problems existed in Great Britain or Austro-Hungary. In other words, what Marshak proposed to his associates was revolutionary?

Olena Bezruk:  Absolutely revolutionary, although children also worked for him, but only until 3:00 p.m., because then they had to go to school.

Andriy Kobalia:  In other words, he spurred them into obtaining an education?

Olena Bezruk:  Absolutely! Parents dreamed of giving their children to Marshak because they realized that they would get a trade on-site. During the entire existence of these businesses, they trained up to three hundred craftsmen!

While we’re on the subject, women worked in his enterprises! Hardly any jewelers did this! His female workers worked on engravings and small chains, enjoying the same conditions as men. Plus, he shortened the workday to nine hours and forty minutes, from eight o’clock to six in the evening, with a mandatory ninety-minute break. Saturdays, Sundays, and holidays were days off. His workers earned between three and ten rubles. No one wanted to leave his employ; people worked for him for decades, even though the discipline was quite strict. The fine for smoking was one ruble; for boorishness—one ruble; for lateness—from ten to thirty kopecks. If you were late often, you were fined your entire wage. For socializing with friends or relatives during working hours—75 kopecks. But he also proposed conditions: You have everything, you can study, earn well.

Andriy Kobalia:  And after working for him, a helper could start his own business?

Olena Bezruk:  Of course, he could.

Andriy Kobalia:  Joseph Marshak the jeweler started out in a small atelier in the Podil district. Over time his jewelry began to be sold in Warsaw, Petrograd, and Moscow. He traveled to exhibitions in the U.S. The regional historian Olena Bezruk talked about the expansion of the business owned by Fabergé’s competitor.

Olena Bezruk:  He was always open to anything new. His artists traveled the world to spot new trends. There was a fire in 1899, when he was already a big businessman. Practically everything that he owns is destroyed. Of course, there were savings, but the equipment was destroyed. He restores all this, builds three more ateliers, and increases production. After this story, he opens five places at the beginning of Khreshchatyk Boulevard, nos. 1 to 8. I don’t understand how this happened! What imagination and energy do you have to possess to achieve this?

Imagine: Fabergé arrives here. Everything is going well for him in St. Petersburg and Moscow. He opens up an atelier. Then he closes everything down and leaves, saying “Masters two will not do.” Fabergé cannot compete with Marshak! And one of the reasons is that he hired the best jewelers, who simply could not refuse the conditions that Marshak was offering There were 232 jewelry factories in Kyiv gubernia; that’s quite a few. And he was beyond competition. Good working conditions, specialists, and the training of their own personnel produce a good result.

Andriy Kobalia:  The Russian historian Lev Lurie, who studies the imperial period and the rise of big business, writes that in those days people did not become tycoons, they were appointed. Perhaps he was thinking more of Petrograd and generally those gubernias that are part of the Russian Federation today. But he said that in the majority of spheres it was difficult to start a business without the support of people who were in the tsarist circles, for example, Nicholas II. Yet Marshak’s business evolved rapidly from a small atelier to a mighty jewelry empire. Was there support from the government? Did he know influential people?

Olena Bezruk:  I haven’t heard anything about this, even though I worked in some detail on his history. What I do know is that in 1913 he submitted a request to Nicholas II to become a purveyor to the tsar’s family. And on his seal “J. Marshak,” he wanted to put a two-headed eagle. He never received a reply, despite the fact that 1913 marked the 300th anniversary of Romanov rule, and Nicholas II visited Kyiv. All the gifts of jewery were purchased from Marshak. These were amazing items, for example, a miniature replica of the Pedagogical Museum and all its details made out of silver. Even then he didn’t receive a reply! He was not told either “no” or “yes.”

Andriy Kobalia:  And then the First World War began…

Olena Bezruk:  Later, yes. Then there was no longer any point. And in 1918 Marshak dies of cancer at the age of 64. He leaves a wonderful last will and testament: He divided everything up among his children.

Back in 1913, the jubilee year of his factory, he deposited five thousand rubles into a bank to help those of his employees who could no longer work because of their age. He also founded a vocational school, and he paid all the expenses. And he gave money for dowries to factory girls who had not gotten married.

Andriy Kobalia: He thought of everyone.

Olena Bezruk:  Marshak ensured that his money would work even after his death.

Andriy Kobalia:  You mentioned a silver replica. Is there any trace left of his collections? We also talked about the Brodskys, one of whom in his last will and testament financed the Bessarabian Market. Are there any buildings associated with Marshak?

Olena Bezruk:  For the most part, no. The part of Khreshchatyk Boulevard on the side of the Hotel Dnipro was almost completely destroyed in 1941.

Andriy Kobalia:  I have a sneaking suspicion that in 1917–1919 when many people were fleeing these territories because of revolutions and wars, they brought a lot of things with them.

Olena Bezruk:  Marshak’s family left after Joseph’s death. They sewed diamonds in the seams of their clothing and were able to bring out gems worth 52 million francs; this was an incredible sum. People who needed cash came to them. That’s why Joseph Marshak bought [gems] whenever he could in 1917–1918. That’s how the family was able to leave with something. Then they “ate diamonds.” If there are any Marshak creations in Kyiv, they exist only in private collections, and we will probably never find out about them.

Andriy Kobalia:  The Soviet government expropriated Marshak’s factory. Joseph’s son, Oleksandr, opened a salon in Paris on Rue de la Paix, not far from Place Vendôme and the Hôtel Ritz.  Today the Marchak shop, whose history began in the village of Hnativka, a suburb of Kyiv, is located on Rue Saint-Florentin, near Place de la Concorde, right in the heart of Paris.