Women in the Bible are disenfranchised and treated like chattel, and their virginity—like currency: Ostap Slyvynsky 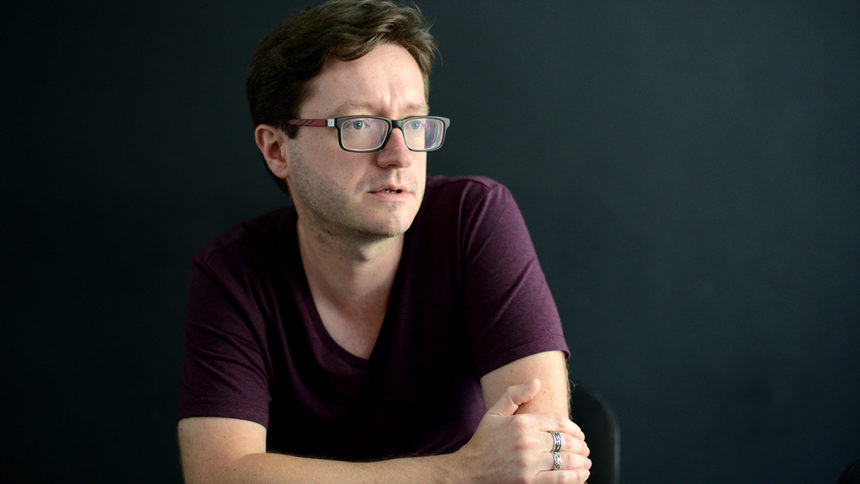 We talked about Ostap Slyvynsky’s poetic cycle Imena [Names], which features figures of women whose names we have heard but have not paid attention to them.

Ostap Slyvynsky: For the first time, I decided to write a conceptual cycle that would be based on a specific idea. The idea, in its turn, would be based on a certain problem that I accidentally encountered. In Ukrainian Wikipedia, I came across the fact that women in the Bible are rarely mentioned by name. Women constitute only some 5.5 to 8 percent of the total number of all named personages, both men and women. Meanwhile, there are quite a few women in the Bible. I became very interested in this: Where are all these women?

When I began to reread the Old and New Testaments, everything that I had suspected was confirmed. They are all somewhere on the margins, like some nameless shadows passing behind the backs of the male personages; very often, they are tied to their husbands. They figure as ‘Abraham’s wife,” “Lot’s wife,” “Moses’s wife,” “King David’s wife.” For the most part, we do not know their real names; their roles are episodic. But this does not mean that there are no complex destinies and circumstances behind these episodic roles, of which we can only imagine.

Iryna Slavinska: Perhaps you can provide some examples.

The Holy Scriptures are the matrix of our (Judeo-Christian) thinking. It affects us subconsciously. We begin mechanically to recreate a certain model of interpretations of these subjects. For example, we know what happened to Lot’s family, particularly his wife. However, behind this story are several very interesting episodes. One of them is the episode where some guests arrive at Lot’s house. He knows that these guests are angels—emissaries of God. In Sodom, where he lives, there is a custom: If strangers appear, they must be handed over to the crowd—who will decide what to do with them.

Some locals come to Lot demanding that he hand over his guests. But here he does something very interesting. Instead of his guests, he offers up his virgin daughters. This episode demonstrates the disenfranchisement of women and their treatment as chattel or currency. It is not just woman as currency but her virginity. This is the form that many Old Testament figures use to pay off God or people.

Here is another very interesting story about the daughters of Yiftach (Jephthah), one of the judges of Israel. Out of necessity, he became the head of the Israelites. For a victory over the Ammonites, he promises God that he will sacrifice the first man or first woman who comes out of their house to greet him when he is returning from war if he returns. This was supposed to be a sacrifice of thanksgiving. His daughter comes out to meet him. He cannot take back his word. The fact that she is a virgin is also emphasized. This seems to reinforce this sacrifice; adds to her worth. The only thing that her father allows her to do before her imminent death is to mourn her virginity. In other words, virginity is a woman’s added worth—but as a bargaining chip, an instrument, or means during negotiations, absolutely not as an independent being. Woman appears as an absolute object.

Iryna Slavinska: So this appears to be a form of utter helplessness?

Of course, helplessness. There are very strong women in the Holy Scriptures, especially in the Old Testament. There are two books with women’s names in the titles: the Book of Ruth and the Book of Esther. They have a public presence. But they are the exceptions. By their brilliance and charisma, these exceptions overshadow those hundreds of nameless women whose dramas are invisible, who remain on the sidelines. If we read closely, then we do not even pay attention to the kind of permanent message that stands behind it. And the message is that a woman is disenfranchised. She cannot do anything without a man. This is a tone that echoes throughout the Old Testament.

Iryna Slavinska: Can one say that this image of a defenseless woman, a bargaining chip, or a means to an end can be the one that left a mark on society in its treatment of women?

Ostap Slyvynsky: In general, I think that this is some kind of patriarchal archetype. If we look for the source of this archetype, then we arrive at the image of Eve. This image reinforces the secondary nature of a woman, her tendency to sin into which she drags a man. She performs an action—and that is another reason for her stigmatization—aimed against God.

A brilliant example of the interpretative strata that stigmatize the female body is the story of Mary Magdalene.

Ostap Slyvynsky: In the established, popular interpretation of the past, Mary Magdalene is a dissolute woman, a woman who later repented and became a devotee of Jesus Christ.  In fact, the Gospel does not state that she was dissolute and that she repented. All it says is that Jesus cast out all the demons out of her. And some kind of corporality or sexuality is not the point here.

Where did this interpretation come from, this corporeal, sexual aspect of Mary Magdalene’s image? This is very interesting; it is a later interpretation. Once again, we have some kind of semi-conscious stigmatization of female corporality because that way it was simpler to present this image of Mary Magdalene.

Iryna Slavinska: I could not help but be reminded of our previous conversation on Olga Tokarczuk. Could your translation work with Tokarczuk’s The Books of Jacob have affected how you later began to consider the concept for your cycle of poems, Imena?

Ostap Slyvynsky: Yes, indeed. Tokarczuk’s text and the texts that she worked on before writing her novel pose a lot of questions about religiosity and femininity. This is a question that is on the border dividing Judaism and Christianity. In the very same way, the teachings of Jacob Frank stand on the border between these religions. He is the main hero of the book, bridging Judaism and Christianity—in fact, not even Orthodox Judaism but messianic—Sabbateanism. It is precisely Sabbateanism that is characterized by this kind of unconventional presentation of the Judaic doctrine of the Messiah, which states that the Messiah should be a woman.

Jacob Frank, who was a follower and reformer of Sabbateanism, simply reinforced this subject. At the heart of his interpretation lies the concept of shekhinah, according to which the divine presence in the world and the salvation of the world are possible only if divine grace is restored. For Jacob Frank, shekhinah is the female principle that is supposed to come into the world through the woman.

His response to the question of why the Messiah still had not come was that the Jews were searching incorrectly; they were not looking in the right place. They were looking for the Messiah in the body of a man, but he is supposed to come in the body of a woman. Here it might have been possible to suspect Frank and the Frankists of some sort of feminism, but that is not it at all. Frank, who was a rather typical leader of a charismatic sect, involved himself in every sphere of life, including the sexual one. He simply designates with whom the women in his sect are supposed to sleep with the following night, to put it coarsely. Their opinion is not taken into account. He thinks like a totalitarian, patriarchal leader on a daily level until one woman close to him attempts to rebel.

Why did he place so much emphasis on this feminine messianism, the feminine principle? Olga Tokarczuk tries to offer an answer in one of her interviews. She asks a rhetorical question: Was it not simply about legitimizing his daughter, whom he loved very much, more than his sons, in the role of his successor? Perhaps this was a pragmatic act.

Take the television series The Handmaid’s Tale or Margaret Atwood’s eponymous novel. I was simply amazed at how much these plots, the idea of a super-authoritarian, super-patriotic custom that reigns in Atwood’s fictional state, are taken straight out of the Old Testament. Atwood calls this state “Gilead.” This is one of the Old Testament names on the east bank of the River Jordan. In A Handmaid’s Tale, the overarching plot is that handmaids are supposed to bear children for their barren mistresses. In fact, this is a subject from the Old Testament. Rachel, the wife of the prophet Jacob, is infertile, so she forces her servant to bear children for them. This [rape] happened on Rachel’s lap. If you watched or read A Handmaid’s Tale, that scene is recreated almost exactly.

The biggest victims In history [are women]. Following Olga Tokarczuk and Oksana Kis, I can say that the secondary role that women always performed in biblical history and in newer history absolutely did not save them. Their being in the shadows did not protect them. On the contrary, when historical cataclysms occurred, the first victims were women, being the weakest and most vulnerable.