Yad Vashem: "A Ukrainian policeman is recognized as Righteous Among the Nations"

Posted On: August 5th, 2021
Posted In: The Holocaust in Ukraine, History

In a recent decision by Yad Vashem, the World Holocaust Remembrance Center, the title of Righteous Among the Nations was awarded to Pavel (Pavlo) Natarov, who served in the local police during the Nazi occupation of Sumy oblast, Ukraine.

The story of Natarov’s rescue of a Jewish girl sounded so unusual that this topic was the subject of an article in the “Salvation” column of Yad Vashem Jerusalem magazine (issue no. 95), which appeared in late July 2021.

Before the Second World War, the raion center of Seredyna-Buda, in Sumy oblast, was home to five hundred Jews (6.5 percent of the city’s population). A large proportion of them was called up to the Soviet army or evacuated in the summer and fall of 1941.

When the Germans invaded, Raisa Agranovich was five-and-a-half years old. She lived with her parents and an elderly grandmother and attended kindergarten. Her father, Lev Solomonovich, was mobilized into the army, and her mother, Adele Illivna, was a photographer. The little girl, together with her mother and grandmother, was not able to escape the town, which was occupied by German troops on 2 October 1941.

On the morning of 16 November 1941, six days after Raisa’s birthday, policemen arrived at the Agranovich house and ordered them to get dressed and come outside without their belongings. They were taken to the local police station and registered. The little girl noticed a big man in a blue uniform who was present during their registration. The little girl and her mother and grandmother were kept the entire day in a cell in the administrative offices of the police, together with a group of other Jews.

“In the evening, we were brought to an abandoned orchard, and the bodies of dead people were already scattered around there in the snow. We were ordered to lie down. Mama took me by the hand, someone said to aim at the head, and then there were shots. I was not even wounded. Maybe my fur-trimmed hat saved me. But my hand, which my mother was holding underneath her breasts, was covered in blood. And my clothing,” Raisa recalled later.

That day 103 Jews from the town of Seredyna-Buda were shot by soldiers of the 1st SS Motorized Infantry Brigade.

The little girl raised her mother’s head, then her grandmother’s, and whispered to them. Then she said: “Since you’re not answering me, I’m going to go.” She ran toward some lights, sinking into the deep snow with summer shoes on her feet in the bitter cold. Raisa realized that she had to save herself. She knocked on the doors of people’s homes, but they did not let her in. After the war, these people apologized for not having opened their doors to let the little girl, covered in the blood of her mother and grandmother, come inside.

With her last bit of strength, she pushed on the door of a house near the police station. Entering, Raisa suddenly saw the same person from the police, dressed in a blue uniform. The little girl froze. The man, however, called the lady of the house and asked her to hide the little girl and wash her.

For several months Raisa was hidden, restored to health, and fed in this house, where the policeman Pavel Natarov was renting a room. In the summer of 1942, he married Maria Zhytkova, moved into her parents’ house, and took little Raisa with him. The policeman created documents for her in the name of Nina Natarova, supposedly his niece.

In the spring of 1943, the city was liberated by a detachment of Soviet partisans following a battle. A day earlier, Pavel had been arrested by the Germans. His wife, Maria, told the little girl to run to the partisans. From the partisan detachment, Raisa was brought across the front line to an orphanage. She was found there by her aunt, her mother’s older sister.

In August 1945, her father, Lev Agranovich, returned from the front. He took his daughter, and they went to live in the city of Krasnyi Luch in Ukraine’s Luhansk oblast. For thirty-seven years, Raisa Agranovich (married name: Zadera) worked at a sanitary and epidemiological station in Krasnyi Luch. She has been living in Israel since 1995, in the city of Rehovot. She has a daughter, two grandchildren, and six great-grandchildren.

Throughout her adulthood, Raisa tried to locate her rescuer, Pavel Natarov, or discover what happened to him. Her searches were unsuccessful.

She could not have known that while she was living in Luhansk oblast, Pavel was living in neighboring Dnipropetrovsk oblast. In 2018 a doctor named Svitlana Kim happened to see Raisa’s article about Natarov’s role in her rescue and conveyed important information about her savior.

It turned out that Svitlana Kim’s grandfather and grandmother, deported Koreans from the island of Sakhalin, had met Natarov in a train wagon transporting deported and convicted people. After his sentence was completed, Natarov remained friends with the Kim family for dozens of years.

Svitlana said this about “Uncle Pavel”: “It seems that he was not a policeman but an assistant. He said that he had saved very many people from the policemen, hiding them in forests and basements. As a result, a policeman wrote a denunciation against him, but Pavel managed to hide from the Germans.” When he was making his way to the partisans, he was arrested by the NKVD and branded a traitor and sent to the GULAG.

In the winter of 1944, while he was being convoyed to his place of imprisonment, Natarov hurt his arm. Gangrene set in, and doctors had to amputate his left arm up to the elbow.

Kim, who as a little girl remembered Natarov in the 1960s and 1970s, reported: “Every year on 9 May he would thump his fist on the table: ‘Should I die with this stigma of disgrace?!’ Uncle Pavel’s resentment against the Soviet government was personal.” His wife, Maria, had left him, and his son, Oleksii, died in an accident at a factory in Dnipropetrovsk. Natarov died in 1992 and is buried in the same city (today: Dnipro).

Raisa Zadera (Agranovich), who was rescued by him, learned all this only in 2018. She immediately sent her testimonies to the Yad Vashem commission for posthumous recognition of Pavel Natarov as Righteous Among the Nations. The commission in Jerusalem unanimously approved his candidacy. 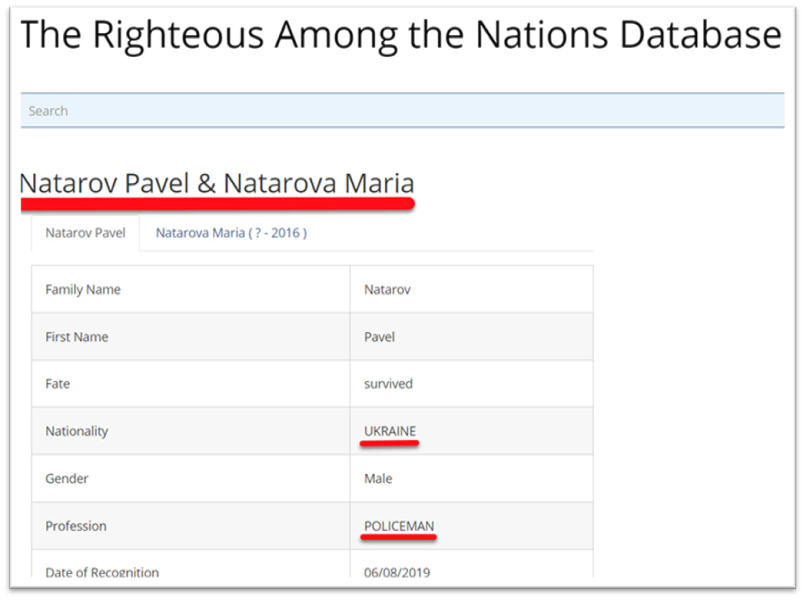