Sometimes I’m not the only one who sees this

After all, like always, everything is resolved by optics and context.

My second visit to Buchach happened once again in autumn, when the foliage and the sun recede slowly, exposing the stone backbone of the city center. At this time of year, all the cities of the country to which a keen scholar gave the eloquent name of “bloodlands” look as though one army has just departed, and a second one is now breaking through with battles on the outskirts. Autumn smoke is streaming in the suburbs. People are filled with that hopeless carelessness in their words and decisions, which come when you understand that the war has ended and you have survived.

However, I would like to talk about the war (I’m lying, oh, I’m lying, I don’t want to at all) some other time. In the meantime, about my return.

The story with Buchach is the same as with any other small town that gave the world a great individual. Especially when it is a writer of Agnon’s caliber. A traveler who has a book for a guide simply has no opportunities to look at the described cities through his own eyes. Given a good imagination, this is generally a lost cause. You see not the winding streets, the steep ribbon of the Strypa, and old buildings behind whose facades are hidden endless life histories. No, you look deeper and deeper. Like a naïve child, you also notice and investigate a parallel city that has been maimed by one war but not yet touched by another; a city that does not pretend that nothing catastrophic happened. Well, it’s like this, there was a war. It wasn’t easy, but people since time immemorial have been fighting. Sometimes we win, sometimes we are defeated. It is God’s will. A city that welcomed its prodigal son, Shmuel Yosef Czaczkes, who long ago had grown out of this Shibush [Agnon’s pseudonym for Buchach], like a child’s outfit. You see bustling bazaars, not silent cemeteries. You see a city that didn’t end up burning, with torched apartments turned inside out and giving up their city residents, like pockets emptied out for a robber, handing over everything to him, right down to the last crumb.

Sometimes I’m not the only one who sees this, and this is thanks not to optics but context.

I have the impression that Agnon was fleeing Galicia, which was too cramped for him. Or he was returning to his usual method—it’s difficult to say. Return, like escape, is such a lengthy process that it can last until after death. I have already been escaping half my life (or, I mean, returning) to this Galicia from the Donbas, open to all the winds.

Family history in these parts is twisted and dramatic. Families generation after generation have changed their citizenship, places of residence, and sometimes even their language of communication. The things you do in order to survive the millstones of bloody regimes. For the longest time, I couldn’t understand why I am always being pulled here. Why did I learn the Ukrainian language? What joy can these words, unusual to the ear, bring? Why is the smell of damp hallways and the neglected state of buildings so hopelessly easy to perceive? I couldn’t understand why the intimacy of the little streets attracts me more than the wide avenues of my Makiivka. And what is the romance of trips from Donetsk mainly to Lviv—1,200 km in a neglected and smelly berth several times a year…  Sounds like an obsession, doesn’t it?

Later, at a certain moment, everything became clear. Descended from a family of Galicians and Transcarpathian people, I am still searching for my lost Promised Land. I am trying to find what was taken from me once. Born so far away from my ancestral land, I am always returning to where my home could have (had to have!) been.

And it appears that I will be returning for a long time, perhaps even after my death, carving out these cities for myself in my family history where regular tourists carve out of the relief a good angle for a photo. 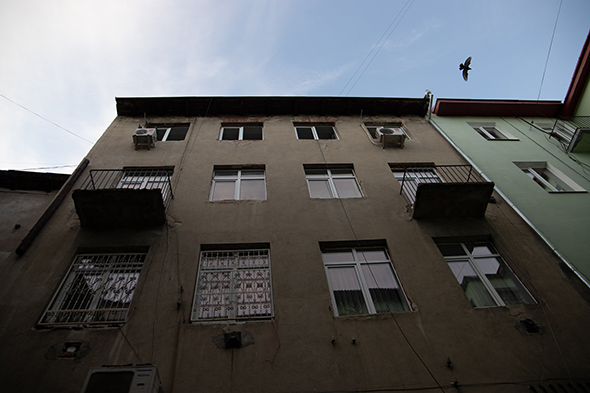 This essay was written during the author’s literary residency in Buchach with the support of the Canadian philanthropic fund Ukrainian-Jewish Encounter.