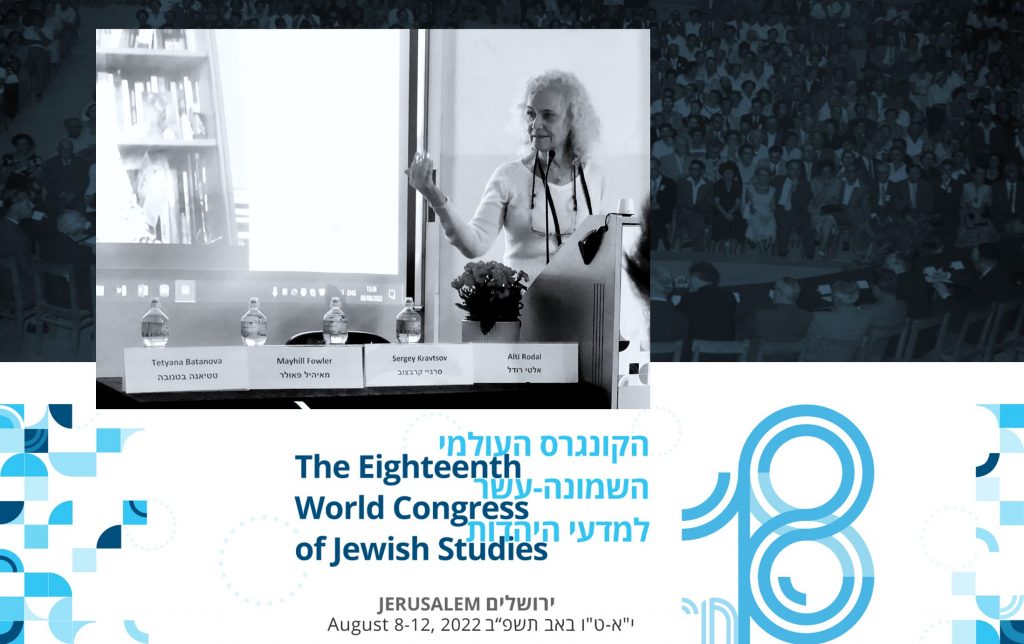 The 18th quadrennial World Congress of Jewish Studies in Jerusalem, 8-12 August 2022, included over 1700 presentations and participants from over 40 countries. Ukrainian representation was seriously limited by Russia's war on Ukraine, which prevented many scholars from participating. Nonetheless, the Congress featured several significant talks highlighting Ukrainian history and the distinctiveness of Ukrainian culture and identity.

A UJE panel on the Congress' opening day, chaired by UJE Co-Director Alti Rodal, focused on how historical and political dynamics, in particular the impact of Sovietization, shaped Yiddish and Ukrainian literature, theatre, and art in Soviet Ukraine.

Tetyana Batanova, Research Fellow and acting head of the Judaica Department of the Vernadsky National Library of Ukraine, discussed the burgeoning of literary translations — from Ukrainian to Yiddish and Yiddish to Ukrainian — in the 1920s–1930s. She highlighted the interaction and contribution of the Jewish Kultur-Lige and Ukrainian avant-garde writers and translators, using evocative illustrations from the rich Yiddish book and periodical collection of the Vernadsky National Library.

In an animated talk, Mayhill Fowler, Associate Professor, History, Stetson University, Florida, described the theatre scene in Soviet Ukraine as a model of multiethnic societal dynamics. She drew attention to the remarkable networks and exchanges among artists of various ethnicities across the closely connected state-run Ukrainian, Russian, Yiddish, and Polish theatres. It is this networked infrastructure that enabled surviving Jewish artists to re-configure their art and careers following the war and after the closure of Yiddish theatres in the USSR.

Serhiy Kravtsov, Research Fellow, Center for Jewish Art, Hebrew University of Jerusalem, offered thought-provoking insights into the political, cultural, literary, and artistic interactions between Jews and Slavic peoples from the Middle Ages to the post-World War II period. The insights on this broad topic were inspired by a new volume of essays on Jewish history and art in Slavic Lands (volume 27 in the series Jews and Slavs). The volume also includes essays on recent projects to advance the protection of Jewish cultural heritage and memory.

Talks in other Congress sessions treating Ukrainian-Jewish themes included Evgeny Kotlyar, "Modernization of the Cultural Heritage of Hasidism: From the Wooden Synagogue in Tolna (Ukraine) to the New Synagogue of Tolna Hasidim in Jerusalem"; Lada Moskalets, "The Rural Jewish Population in the Carpathian Piedmont"; and Alla Marchenko, "The place of Hassidic pilgrimages in local frames of memory."

UJE also had a booth at this year's Congress, as it has in past years.