Awards ceremony for the “Encounter: The Ukrainian-Jewish Literary Prize” ™ will take place on 16 September 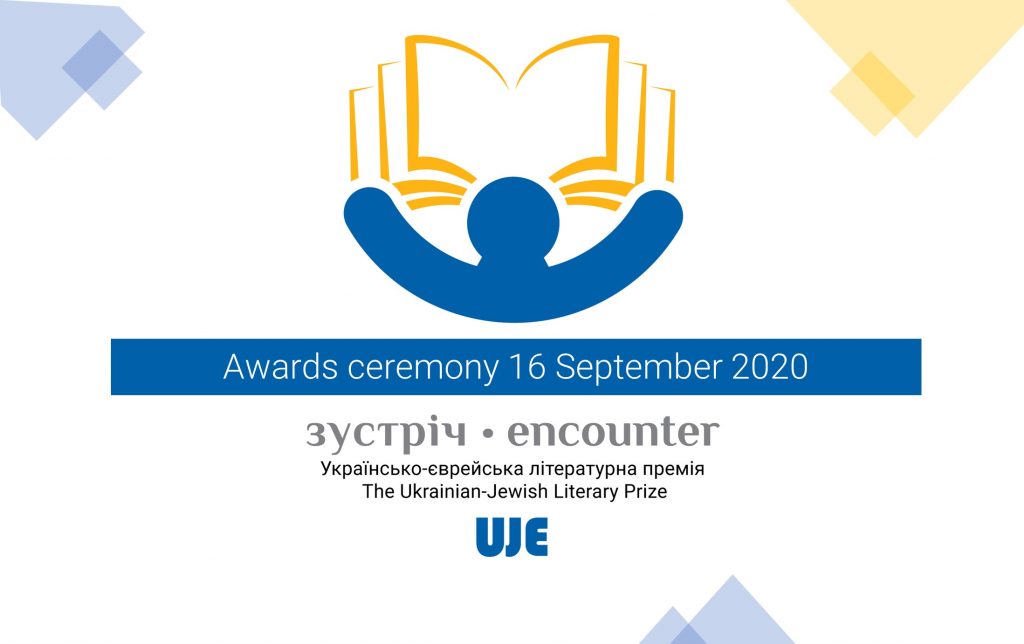 The “Encounter: the Ukrainian-Jewish Literary Prize”™ is awarded every year for the most important work of fiction and non-fiction (in alternate years), which promotes Ukrainian-Jewish understanding by helping to strengthen Ukraine’s position as a multiethnic society and embodying the slogan, “Our stories are incomplete without each other.”

In 2020, 17 Ukrainian publishers submitted 27 competition applications. The long list featured 12 books, five of which ended up on the short list.

The shortlisted books are as follows:

Kateryna Babkina, Mii did tantsiuvav krashche za vsikh (My Grandfather Was the Best Dancer of Them All; Komora, 2019)—a series of short stories covering the period from the 1920s to the present day, recounting the historical changes and upheavals experienced by two nations that have lived side-by-side on this land since time immemorial. These are stories about ordinary people, the families of five contemporary young people and their ancestors, Ukrainians and Jews.

Iryna Vlasenko, Uchytel′ka nimets′koї (Teacher of German; Universe, 2019)—a novel based on real events. Part of this work concerns the story of two Spanish girls who come to Ukraine after being evacuated from Francoist Spain in 1936 and are saved by a Jewish man named Matvii Berelman. Berelman adopts the girls, helps restore the health of the older sister, and gives the girls an education. They are saved from death a second time, when Jews are being shot in 1942 in Tarashcha, where they are taken for Ukrainians. Their fellow villagers are aware that the girls were raised in a Jewish family, but no one betrays them to the occupiers. The novel also recounts the events that took place in Babyn Yar.

Maksym Dupeshko, Istoriia, varta tsiloho iablunevoho sadu (A Story Worth a Whole Apple Orchard; Publishing House 21, 2017)—a novel about Europe’s collective historical memory spanning centuries, from the Austro-Hungarian era to the present day. At the heart of the novel is the love story between Pawel Bachynsky, a descendant of Ukrainian, Polish, and German families, and a Jewish girl named Dora Kapman. Pawel, sharing the story of the most powerful feeling of his entire life and trying to locate Dora, who has disappeared, recounts the tragic history of Chernivtsi and Europe. During his sojourn in the Vinnytsia area, he recalls the camps of Transnistria, where hundreds of thousands of Jews were sent and killed during the Second World War.

Marianna Kiyanovska, Babyn Yar: Holosamy (Babyn Yar: In Voices; Dukh i Litera, 2017 )— a collection of poetry written in the name of the victims of one of the greatest tragedies of the twentieth century. The author does not recapitulate Jews’ stories—she experiences them as though they are her own. Moreover, it is not she who is speaking in the voices of the victims of Babyn Yar, but Arom, Rachel, Roza, Jascha speaking in Kiyanovska’s voice and presenting the Holocaust as a shared page in the history of the Ukrainian and Jewish peoples.

Vasyl Makhno, Vichnyi kalendar (Eternal Calendar; Old Lion Publishing House, 2019)—a panoramic narrative about the lives of Ukrainians, Poles, Jews, and Armenians from the seventeenth century to the present day. Ukrainian-Jewish relations are depicted in all three parts of the novel, starting with the era of the false Messiah, Shabbatai Zvi, and the events of the Polish-Turkish War and the life of the Jewish community of Jazłowiec; coexistence between Ukrainians and Jews is portrayed through the history of the Fridmans, the tsadiks of Chortkiv before the First World War; then the history of the Blonder family and Reverend Felishtan, who helps fugitives from a ghetto during the Second World War.

The awards ceremony for the winners of the Encounter Literary Prize will be held on 16 September during the festive opening of the 27th Lviv International BookForum. A live broadcast from 19:00-20:30 Kyiv time will be available on the official website bookforum.ua.