Jewishnews.com.ua: Dmytro Tyshchenko: Not Only the Jewish Community is Interested in Yiddish

The creator of the Yiddish-Ukrainian dictionary talks about family, history, and the language of the ancestors

Dmytro Tyshchenko is the author of the Yiddish-Ukrainian dictionary that was recently published in Kyiv. He was born in 1964 in a mixed Jewish-Ukrainian international family. In the 1920s Dmytro’s grandfather on his mother’s side, Abraham Zaleshansky, had his works published in his native language Yiddish in Grodno and Warsaw newspapers. An attempt to publish a poetic feuilleton “An Open Letter to my Jewish Neighbor” in the magazine Sovetish Heymland (Soviet Homeland), where the author appears as an ardent patriot of the Yiddish language and criticizes modern Jews for their linguistic nihilism, was refused. 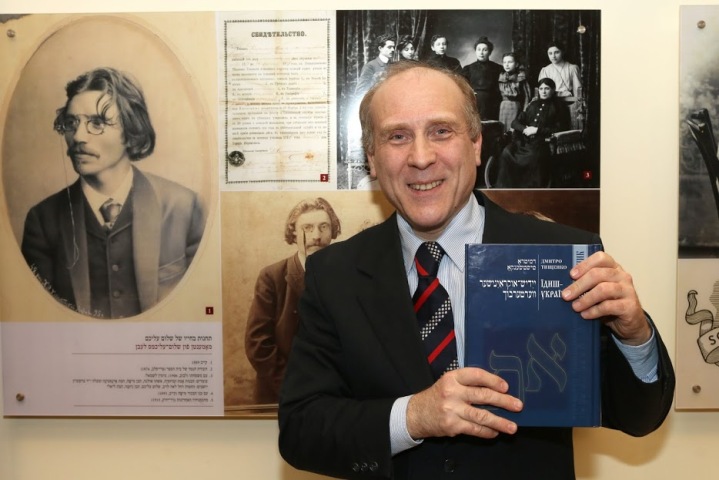 In Dmytro’s memory endured the pain of his grandfather, with whom he talked about the fate of the Yiddish language in the USSR, the fact that there is not even one Jewish theater, and the fact that for two million Jews there is only one little newspaper in Birobidzhan (Jewish autonomous region established in Siberia by the Soviet government in the 1930s, editor’s note), which writes about everything else but not about the vital issues that concern the entire Jewish nation.

The grandfather taught his grandson the Jewish alphabet and read him poems in Yiddish. Shortly before his death, he tied all the Jewish books into a pile, and threw them on the uppermost shelf of the cabinet. He believed that nobody ever would need them, but the grandson took down this pile and started to read the books.

“My interest for Yiddish was born in my family. My ancestors spoke this language; it was as natural as breathing. At the same time, strangely enough, we had little contact with Odessa Jews. Our family comes from Grodno, and there were very few people who escaped from there...But my grandparents succeeded, and they quickly found each other and saved my mother,” as Tyschenko remembers the story of his family. “As I found out later, they spoke with the Lithuanian-Belarusian dialect of Yiddish. When I was in Israel, I found some poems by my grandfather. He was a poet-satirist who was being published in Grodno and Warsaw. At one time he lived on the money he earned on the publication of poetry. But during the Soviet times he had no chance to show his talents.”

With this “heritage” Dmytro had an early interest in languages. He enjoyed studying French with his grandmother Itka, and with his grandfather Abram he read Polish newspapers.

But his parents decided otherwise. Since his mother was a doctor, and his father was an agronomist, it was decided for Dima to study at the Faculty of Biology in Odessa University. There Dmytro started to build a conventional academic career.

In August 1988, the band “Chaverim” came to Odessa. On the stage, Dima heard live Hebrew for the first time from his peers. He also heard songs in Yiddish that only his grandparents used to sing to him before.

This event became a landmark for him, and the future founder of the Yiddish-Ukrainian dictionary decided to devote his life to learning the language of his ancestors to perfection, and to do everything so that other people would get access to the spiritual treasures that were created in this language. He became a member of the Jewish community that appeared during perestroika, created Yiddish courses, and published the magazine Mame-Loshn (Mother Tongue). In 1991, Dmytro went to Israel to study at the Department of Yiddish with Professor Weiner and started to write a thesis on literature in Yiddish.

“For example, the word “foer” (“fire”) in German also means “fire” and “shooting.” In Yiddish it is a homey, kind word, often used in the diminutive form “faerl” or “little light,” says Dmytro. “It says a lot about the mentality of people and their approach to life. The period when Jews spoke Yiddish coincided with the period of greatest achievements of the Jewish people in culture and science. When Israel was created, Yiddish and Hebrew both had a chance to become the main language. It is just that those who were in favor of Hebrew were more practical.

“The first priority was to feed and protect people. When these problems were solved, people started to return to their past, to their roots, and began to analyze their identity.

“It is significant that the interest in Yiddish is occurring not only in the Jewish community, but also among other people. This is happening all over the world.

“The folklore of the nation—its wisdom and proverbs—were formed during the last thousand years in Yiddish, and Hebrew did not have this development.”

Now living in Frankfurt, the author continues to implement his fundamental life goal—the creation of a professional Yiddish dictionary for enthusiasts. With the support of the Jewish Foundation of Ukraine and thanks to a grant from the Canadian charitable organization Ukrainian Jewish Encounter he is publishing Yiddish-Russian and Yiddish-Ukrainian dictionaries, which will help those who want to learn Yiddish. “When I was compiling my dictionary, I tried to use some homogenized version of the language. I took the words that I found in Jewish literature. The soul of the nation is depicted in the vocabulary of people. The lives of people affect the language they speak. But the language also affects life. It is time to pick up the stones...” says Dmytro.

Tyshchenko at the moment is developing an online version of his dictionary, which will make the process of learning Yiddish even more convenient and affordable.