Izrus: Will the Galician Metropolitan Become the Righteous Among the Nations?

The candidacy of [Ukrainian Greek Catholic, ed.] Metropolitan Alexander Sheptytsky has been repeatedly discussed by the Yad Vashem commission but was dismissed each time because the Metropolitan welcomed the entry of the Nazi army in the USSR. The Yad Vashem director is now not against Sheptytsky’s recognition as the Righteous Among the Nations.

Brigadier General of the Army Avner Shalev, for many years head of the Yad Vashem Holocaust and Heroism of the Jewish People memorial complex in Jerusalem, says there is no doubt that Metropolitan Andrey Sheptytsky was saving Jews from death in World War II, as stated on the Kharkiv website Glavnoe. Shalev discussed this issue while answering questions from participants at an international conference of journalists from Ukraine, Belarus, Moldova, and Russia that was held in Israel.

The correspondent of the web resource, who attended the meeting with the Yad Vashem director, quotes the following statement by Shalev,

“Undoubtedly, Metropolitan Sheptytsky was a real patriot of Ukraine. No one disputes the fact that he risked much by saving the Jews from a certain death under Nazi occupation. But for some of the members of the commission, Sheptytsky’s personality remains controversial. He is being accused of supporting Germany in the war with Communist Russia, hoping that Ukraine would become free from Russia and the communists.” Shavlev said Sheptytsky later understood that he was wrong about the Nazis. According to research by Professor Shimon Redlich—who was born in Lviv in 1935, was saved during the Holocaust by a Ukrainian family, and emigrated to Israel in 1950—Metropolitan Sheptytsky saved at least 150 Jews. 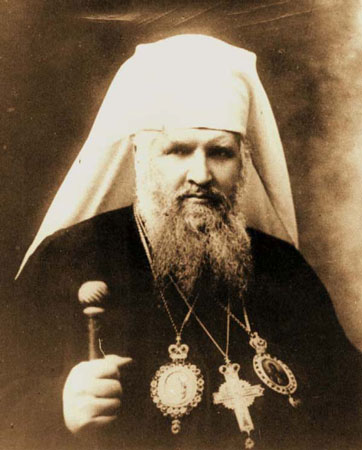 Andrei Sheptytsky (Count Roman Maria Alexander Sheptytsky) was born in 1865. In 1900 he was appointed the Metropolitan of Galicia. He was very well educated and knew biblical and contemporary Hebrew. During the Beilis process he denied any blood libel. He did not accept Bolshevik rule, which he hated for personal reasons as the NKVD shot his brother Lev. He welcomed the German army immediately after the their invasion of the Soviet Union, hoping that it would liberate Ukraine from the communists, and sent a letter to Hitler promising to pray for his victory. He also contributed to the creation of the Galicia Division. Witnessing Nazi atrocities, he reconsidered his position but was not arrested by the Germans only because of his great authority and love from his flock. He hid Jews in his residence, and then created an entire secret network to transport them to churches and monasteries where they were hidden. Sheptytsky died in 1944. Andrei’s brother Klement, who was managing this network, was recognized as Righteous Among the Nations. The candidacy of the Metropolitan was considered in twelve meetings of the Commission of the Righteous at Yad Vashem over the past twenty years but was rejected every time. In 2000, the leadership of the Ukrainian Jewish community honored him with the title of Righteous of Ukraine.