A Journey Through the Ukrainian-Jewish Encounter: From Antiquity to 1914

Posted On: September 30th, 2015
Posted In: A Journey through the Ukrainian-Jewish Encounter, UJE Initiatives, Exhibits 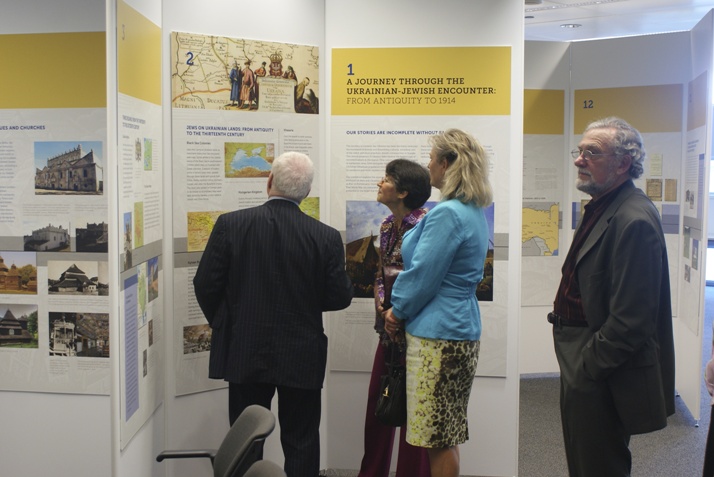 The travelling exhibition, A Journey Through the Ukrainian-Jewish Encounter: From Antiquity to 1914, was shown between May and September 2015 at six venues in four Canadian cities — Toronto, Winnipeg, Edmonton and Montreal. The exhibition, developed by the Ukrainian Jewish Encounter, afforded the many visitors an overview of the history and myriad interactions of two historic peoples living side by side on Ukrainian lands. Visitors could enter into the history through 36 panels featuring introductory texts, maps, graphics, paintings, photographs and other images. Continually playing short videos focused on particular themes, including marketplaces as sites of the encounter, the role of artisans, and scenes of daily life. The videos included compelling period photographs, accompanied by evocative music, including music recorded on wax cylinders during ethnographic expeditions in the Jewish Pale of Settlement over a century ago.

Topics explored in the display panels included the social and economic dynamics of life and Jewish-Ukrainian interaction within the Polish-Lithuanian Commonwealth; divided historical memories regarding Cossack uprisings against Polish rule in the seventeenth and eighteenth centuries; the origins and extraordinary expansion of the Hasidic movement on the territory of Ukraine; the flourishing Hebrew/Yiddish publishing scene and literary renaissance; perceptions of Jews held by Ukrainian literary figures and leaders of the Ukrainian national awakening, as well as the depiction of Ukrainians in Jewish literature. Two parallel segments of the exhibit treated the challenging transformations experienced by these two stateless peoples in the course of the “long nineteenth century” (1772-1914) — in the Russian Empire and under Austro-Hungarian rule. A concluding section treated the large-scale migration of both Jews and Ukrainians to North America beginning in the 1880s-1890s.

The travelling exhibition was very well received in both the Ukrainian and Jewish communities. Opening receptions in each city featured live Jewish and Ukrainian music and offered sample dishes of the shared cuisine – but one illustration of cross-cultural influences over centuries of co-existence.