Details are important. In fact, details are crucial—whether for tracing a family tree or building a legal case. For example, a case for the judgment and conviction for murder. 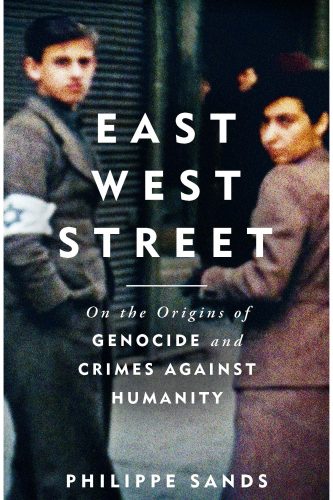 The international lawyer Philippe Sand, a professor of law at University College London, is fascinated by details. His recent book “East West Street”, is a gripping account of the origins—in effect, the invention—of the terms “genocide” and “crimes against humanity.” His book is hailed by critics as a monumental achievement.

“East West Street” is a book of secrets, secrets patiently uncovered in a compelling narrative through diligent detective work in archives, memoirs, interviews, and unexpected travel to long hidden sources.

“East West Street” is at once a detective story, a courtroom procedural, and a heart-wrenching family saga. The book weaves together two stories—one personal, and the other public. The stories begin and end at the Nuremburg Trial for Nazi war criminals.

The author did not expect to write this book. Back in 2010 Sands received an invitation to deliver a lecture in the city of Lviv in western Ukraine. The lecture was to cover his academic work and legal cases on Crimes Against Humanity and Genocide.

Sands accepted the invitation because his grandfather Leon, a Galician Jew, was born in Lviv one hundred years ago, when the city was known as Lemberg in the glittering final years of the Austro-Hungarian Empire. Sands wanted to see the streets his grandfather walked as a young boy.

The author discovered in his research that two men—the jurists Rafael Lemkin and Hersch Lauterpacht—had strong connections to Lviv. Both Lemkin and Lauterpacht came from similar Jewish backgrounds in the city. And both studied at the same law school and had the same teachers.

Lemkin and Lauterpacht are considered to be fathers of the modern human rights movement. Both men forged diametrically opposite and revolutionary concepts of humanitarian law. And these concepts—genocide and crimes against humanity—became the centerpiece for the prosecution of Nazi war criminals.

The author of “East West Street” brings together the stories of his grandfather and Lemkin and Lauterpacht into a dramatic revelation. All three men shared a dark connection. They all had the misfortune of having their entire families sent to their deaths by the Nazi governor of German-occupied Poland Hans Frank, who visited Lviv in 1942.

Even more astonishing, Sands, in his work on this book, got to know the son of Hans Frank. Sands also met the son of another Nazi, Otto von Wachter, who was in charge of Lviv during the Second World War.

Hans Frank and other high-ranking Nazi officials met their fate at the epic international legal judgment at Nuremberg. All modern legal cases on Crimes against Humanity and Genocide can be traced back to the precedent-setting Nuremberg Trial, a trial shaped by Lemkin and Lauterpacht.

The terms “Crimes against Humanity” and “Genocide” have now become part of the language of daily life in our times. They are a way of affixing a label of horror to an atrocity taking place somewhere in the world. But we must remember that these terms are invented. Invented by the two jurists from Lviv.

While the terminology they created is—relatively speaking—recent in the grand sweep of time, the problems they address remain eternal.

What remains the same? Man’s inhumanity to man. But now we have guidelines to judge this inhumanity. And civilization can apply these guidelines in a court of law, but only if the international community has the wisdom and will to do so.

But most importantly what the reader will find in this fascinating book is that individuals can make a difference. In the face of horror some will find the courage and strength to achieve extraordinary goals.