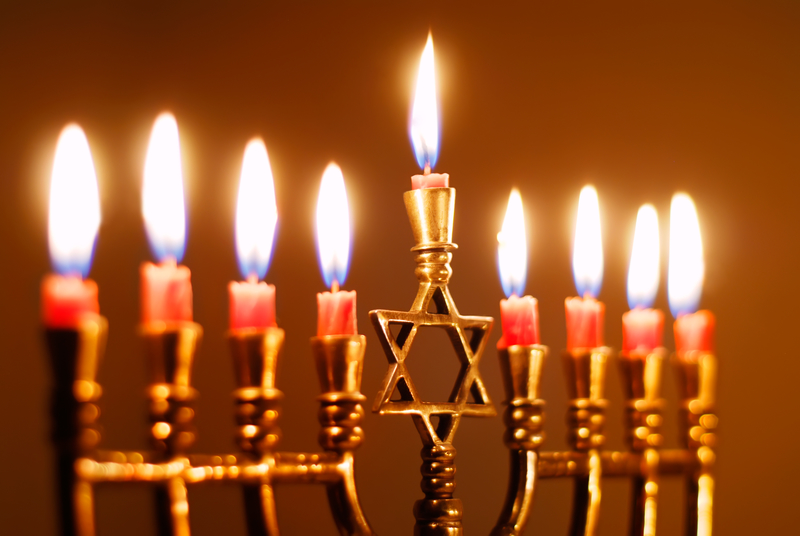 Hanukkah starts on the Hebrew calendar date of 25 Kislev, and lasts for eight days. This year on the Gregorian calendar it starts on November 27 and ends on-December 5.

Hanukkah is a joyous holiday, celebrated every year by Jews around the world with the lighting of candles on the Menora. Traditional Hanukkah treats include hot potato latkes called also platski or draniki in Ukrainian, and donuts with jam – called pampuchki in Ukrainian. And there are games such as Draidel, and Hanukkah Gelt which is Hanukkah money or gifts, for children.

In Soviet times, Judaism could not be practiced freely in Ukraine so the Menorah was impossible to buy. It wasn’t even possible to see a Menorah in the museums as it was considered a forbidden religious item. So, in those times Jews made Hanukkah lights out of a half potato with sunflower oil and wicks made out of cotton.

Hanukkah, known as the ‘Festival of Dedication’ and also ‘The Festival of Lights’ commemorates the victory of the Maccabees over the Syrians in 165 B.C.E. The Maccabees wanted Jews to renounce their G-d and turn to idolatry.

Hanukkah also honours the memory of the re-dedication of the Holy Temple in Jerusalem.  The temple had been defiled by the Syrians who, among other things, erected a statue of the idol Zeus in the temple.

According to tradition, when the Temple was re-captured, only one small vessel of consecrated oil was found – enough for just one day. Miraculously, it sufficed for eight days until new oil could be prepared. The festival was established for this length of time to commemorate this miracle, which is also considered a triumph over the oppressive and antagonistic Hellenistic empire.

Today, as in years past, to light the candelabra is the essence of celebrating Hanukkah. Each night of the festival an additional candle is lit until on the last night, eight candles are burning. Each candle has its own special meaning.

Today Jews in Ukraine celebrate Hanukkah freely. The Jewish community gatherings on Hanukkah demonstrate the triumph of deeply-held belief in the Almighty over totalitarianism, just as with the first Hanukkah, faith triumphed over idolatry and oppression.

On this Hanukkah, we wish each other that we should be blessed with Lights and Peace in all homes and with Peace around the World.

This is Renata Hanynets at the Faina Petryakova Scientific Center for Judaica and Jewish Art, in L’viv, Ukraine. Until next time, Shalom!